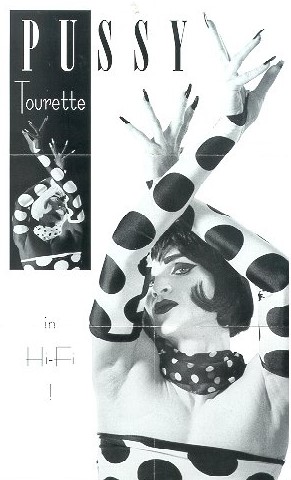 I love me some pussy. After the legendary Sylvester, and before RuPaul hit the seen big , there was a queen who filled that void in the late eighties and 90's  who in many respects,  really started giving drag a different spin with the style, taking it away from the campy look, and dared to even sing his own creations instead of lip synching.  Pussy Tourette was another of my role models, who simply just captivated my adoration and attention. One out spoken queen who gave two fucks what people thought of his drag. 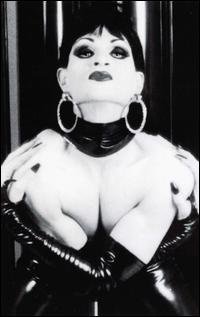 Pussy Tourette was this queens stage name, and was in addition a composer and singer. Pussy was a very cute boy and had his beginnings as a go-go dancer in the San Francisco's teeming underground scene. It wasn't long before Tourette was one of the hottest boy dancers, and one of the sauciest acts on the city's cabaret scene when she started singing her original compositions live. After that Pussy Tourette was born and a club diva emerged. While she was huge on the west coast, she mostly was only known to the rest of the country in the club scene, even though she did pretty well here on the east coast. If you had a good talented club owner,  and dj, then you heard a Pussy track played on the dance floor. One such track for me was her song Kiss, with  many cameos from Sister Roma and Sister Unity, Frenhie Rivera and more. It was also a song I did once or twice myself. Boys loved this song. I so enjoyed the lyrics of it.  Rarely was Pussy seen anywhere without her two backup singers and female friends.

Touring nationally had helped her develop nothing less than a fanatical following. Five of Tourette's songs were featured in Sex Is, which won the Best Gay Film Award at the Berlin International Film Festival. Pussy went on to do I believe 4 albums of music. She was best known for her song French Bitch. The song was a comedic high camp dance track about the duplicitous title character who "stole my man" cause she felt the need to scratch an itch, and it was implied the character was an over sea's trans woman. 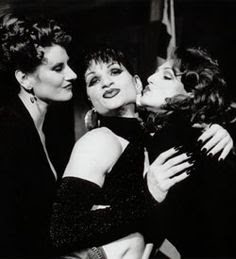 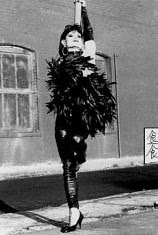 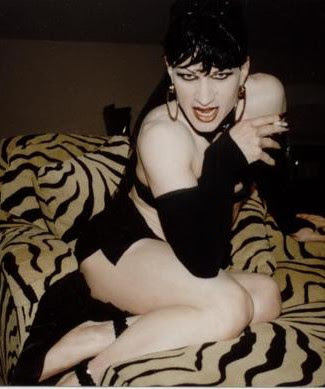 In 94 Pussy won San Francisco's Cable Car Award for Entertainer of the Year. And was no wonder. Pussy is one of those charismatic performers,  and was always in tow with the sauciest of cabaret acts. He knew how to captive and draw a crowd and generate a loyal and adulting fan base. His shows were not only entertaining, but that voice was just so different for the time and all his music was fresh for the time and danceable. Any self respecting drag queen should have his music in their collection, not to mention anyone who enjoys a good  dance beat and old school music  Most of his images and  music drips with inspirational and confrontational imagery that's unapologetic, and up front about life on the wild side. I would love getting pussified on the dance floor.

I even once found my own Pussy Tourette album at a vinatge stand once while shopping in a antiques mall. Not even opened yet. 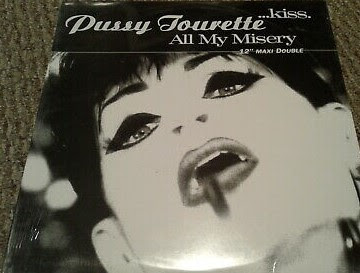 Now IF I just knew SOMEONE  who had a turntable to listen to this on???
I'm  not sure why we don't hear more of her these days. To my knowledge she is still with us, just off the radar. In many respects yet another free thinker, great entertainer and was way ahead of her time.
Posted by Mistress Maddie at 2:36 PM