A HAPPY PRIDE to many today and tomorrow to many in cities that have Prides this weekend. 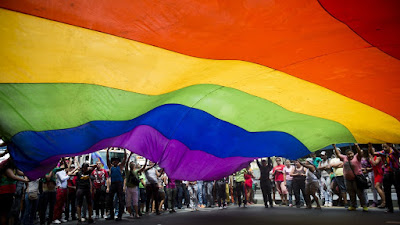 From peace movements to political parties, the rainbow flag has been the symbol of dozens of historical and cultural organizations. In 1978, though, a gay artist and civil rights activist Gilbert Baker created the first gay pride flag in response to a anti gay community growing.Remember, while at Pride parades and festival to embrace the colors and rise above our haters. As is tradition from years past post. here is the annual pride post, but updated with new undies!

Red...Life: The top color in the rainbow flag 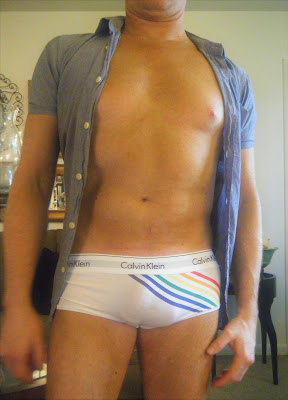 Orange ...Healing: Bright and bold, and  stands for healing, a symbol especially important in light of recent events.

Yellow...Sunlight: A message about being yourself instead of hiding in the shadows, the yellow stripe on the rainbow flag is meant to represent sunlight. 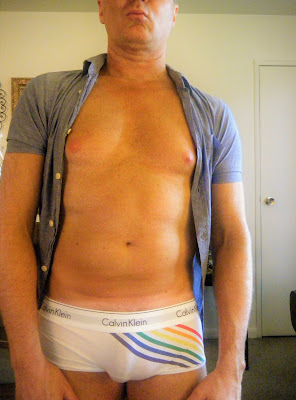 Green...Nature: As it does in many other instances, green represents nature. 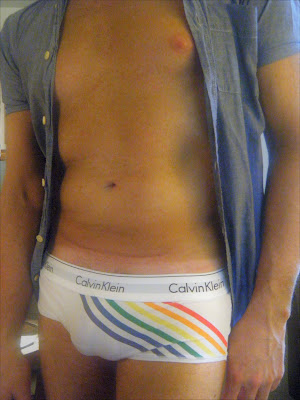 Blue...Serenity: the original turquoise and indigo stripes were replaced with blue, the cool and calm color that stands for serenity. 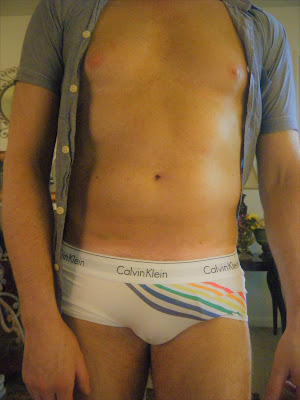 Purple...Spirit: Saving the best for last, purple, which falls at the bottom of the flag, stands for spirit. 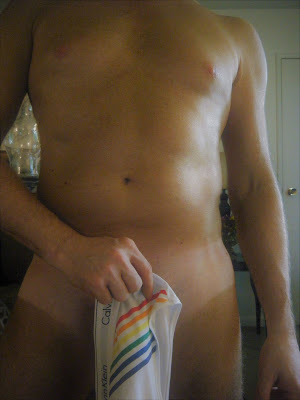 Take off those colors and show em and wave them proudly!!!! I'll be leaving for the weekend later today to head to New York's' World Pride to par take of what's bound to a memorable experience with such a anniversary. A friend of mine taking the rain up recently texted that the Amtrak up to the city is like one big long party train!!!!!

So let's let the good times roll and all have a Happy Pride Weekend...just get up, get out, live and be seen. Cause baby, we ain't going anywhere.
Posted by Mistress Maddie 51 comments:

Tell us what comes to mind in three words with our weekly guest.

This week is deliciated to  Marsha P Johnston. The P stood for Pay it no mind.  Bunny recently reminded me of a poem that an associate of Marsha's wrote about her, who was one of the rioters at stonewall and got the ball rolling, but was also a beggar. The poem is sort of bitter but entertaining to read. The poem actually stings, but people need to hear. It's how the main stream gays view the different part of the community...the fats, the seniors, fems. queens, trans and such.This poem is a much-needed reminder for mainstream gays who to this day often frown on drag queens even in the gay pride parade. They need to remember who started gay rights for ALL gay people. It wasn't the mainstream gays who could throw on a pink shirt one day a year and then return to their office jobs and butch and masculine it  up and their act for the rest of the year. Trannies, drag queens, drag kings, sissies and other freaks on drugs started the movement at the Stonewall Inn, So conservative fags, don't you even DREAM of trying to cut us out of the picture, or anyone who doesn't fit the masculine jock gay guy... now that you've gotten what you wanted and don't consider us to be an accurate representation of the average gay. Maybe we're not. But no average gay gave birth to the gay rights movement. 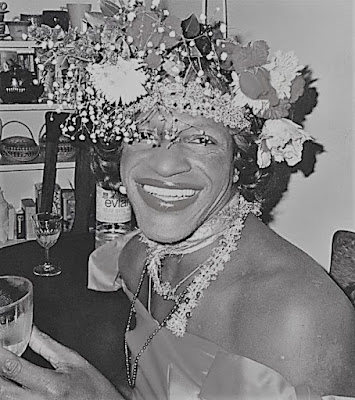 And if you shall choose to read the poem....
Can you spare any change for a dying queen dar—ling?I mean I am dying.I know you don’t believe me.But I know what I’m talking about.Yes I do.Us queens know what we’re talking about because we’re for liberation, yes we are.Look at the Stonewall.When I first came to New Yorkall pressed and cleanin a white shirt and tiewhat my mother bought meI heard about the Stonewallso I thought I’d go over andcheck it outand LORD!Men are dancing with menand one more gorgeous than anotherand way in the back were my sisters, honeyturning it out in gold lame and wigs for days.SoI was hanging out in the Stonewall one nighttalking to Miss June, who was feeling lowand nodding out on downswhen she looked up at me and said,“Them pigs come in here tonightthey better stay off my motherfuckin’ case.”And she was right causewe wasn’t bothering nobodyjust hanging out and being ourselveswhen don’t you knowsure enoughthe whistle done blewand in they comepushing and shoving everyone just likea bunch of pigsand ain’t nobody said nothingcause in them daysif you was gayyou didn’t sayyou was gaySo they’re pushing and shovingand nobody said nothingtil them came to the queensthen this pig comes upand gave Miss June one slapknocked her downripped her dressand scratched her face.Now Darling,anybody will tell youthat a queen is sort ofsoft hearted, easy going personwho you can sort of shove aroundbut Darling let me tell you this.There are two things you cannot do to a queen.One. You cannot rip a queen’s dress.And Two…Don’t you ever, nevertouch the face honey…Well Miss June got upscreaming and yellingwhen this pig goes to hit her againso I said”Hey, why don’t you leave her aloneshe ain’t bothering nobody.”And he turned to me and said,“Shut up you sick faggot.”Now Darling,You can call me a lot of things,you can call mea queer,a cocksucker,or a crazy fool,but ain’t nobody got no right to call mea piece of wood.That’s right,a piece of wood.I looked it up one dayand it was right therein the Webster’sa faggot is a piece of wood.And Darling I ain’t no piece of woodand I was telling Miss Pig this whenhe came to knock me,then Miss June picked up a chair and swung itand everybody started screaming and fightingand queens was getting their faces scratched honeyand you know what that meant.And the next thing I knowwe all wound up in the Tombs……..again.Them pigs donebusted up our fun, busted our headsand just plain old busted us.But that was O.K., honey.Yes it wasbecause that was the beginning of gay liberationin New Yorkand in the world.Yes it was.And now everybody done forgotwho done what and why and howand you know, sometimeswhen I pass one of them gay barswhere I see my brothers or sistershaving a good time and turning it outin all their liberated gloryand I see hanging right over that bar a signwhat says “No Drunks, No dogs, No drags.”Can you imagine comparing me to a dog?Well honey, I just want to break right down.But I just pay it no mind,that’s right darling, cause once you 86 me I tipand once I tip I stay tipped.And they can 86 me out of every gay bar in the village.And they can 86 me out of every gay bar in New York.And honey, they can 86 me out of every gay bar in the worldand I pay it no mind because I got my friends.Yes I do, and I do know who my friends are.My friends are people who love their gay sisters and brothersincluding the queens.My friends are people who got change to spare.And my friends are people who smile at me and understandwhen I sayCan you spare any change for a dying queen, Dar—ling?So they next time you’re in one of them bars what has that sign,“no drunks, no dogs, no drags”the next time you see themturning out one of my gay brothers or sistersHoney, you just dig real deep downinto your pocket and take some of that change you’re saving foryour cold beers and your hot dogsand get over yourself and


spare some change for a dying queen………dar—ling.

Ill be in New York City part of Saturday and all day Sunday for the New York World Pride. We will be taking drinks at the Stonewall Inn....I've decided to dedicate the whole weekend and drinks with each toast  to the honor of Marsha P Johnston and all our brethen.
Posted by Mistress Maddie 15 comments: