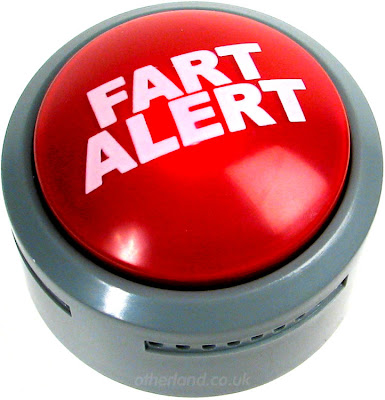 Alright, it's not very often the Mistress talks vulgar. And by the picture above you can probably guess what this post will be about. Yes y'all- passing gas! Now yesterday while at work, I was working with our store engineer in a Fendi hard shop they are installing. While we were in the shop finishing things up poor Win, no pun intended, that's his name, wasn't feeling too good. So he decided he was going to let one fly. Well, I was just appalled. And the Fendi Selling Specialist wasn't too amused either and replied,"Men will be men!". He then apologized and then he followed up with,"I'll bring it up again and we can vote on it." We all laughed at what he said ,and then the sound of the zeppelin. And if occurred to me that every job I have ever had, the whole place just talks of farting and all kinds of other gas talk! I swear someone, somewhere is always taking about passing gas. Every job I swear. Now Win's assistant is also on the bandwagon and has even brought in a timed whoopee cushion and he plants it somewhere in the store just for shits and giggles. I have to admit, when it doesn't happen to me it is pretty funny to see what people's faces look like when they hear it. And his term is always "Who cut the cheese!" We then also talk about what terms people use for passing gas. My mom's brother would always lets gas pass freely, to the repulsion of my mom. He would always reply,"Well Em, you can't hold back what you can't hold in your hand.", or "There's a kiss for you. I also remember a story that my mom told me. When she was young and in her working days, she would take the bus into town to work. One day while going home a few days before Easter, a HUGE woman got on the bus with a card board box of dyed chicks for all her kids. Somehow, the box fell over and the chicks ran rampant all over the bus. The woman and another passenger were collecting the chicks and the huge woman was at the front of the bus collecting them. When she bent over to pick one of the chicks up,she passed a huge zeppelin. Some people laughed but tried not to. But then the bus diver said to her,"That's right lady, if you can't catch em, shoot em!" My mom then said the whole bus burst into laughter. But the bus driver was a joker anyhow, so you had to know him. But unlucky for him.It turned out to be the mayor's mother and he was later fired. The story always makes me laugh. So that's the saying I use when someone pass gas or I inside joke between Mamie and I, BEAN DIP! Long story. So what terms does everyone else use out there. I know some of you have boys, so I can only imagine!
Posted by Mistress Maddie

Email ThisBlogThis!Share to TwitterShare to FacebookShare to Pinterest
Labels: funnies