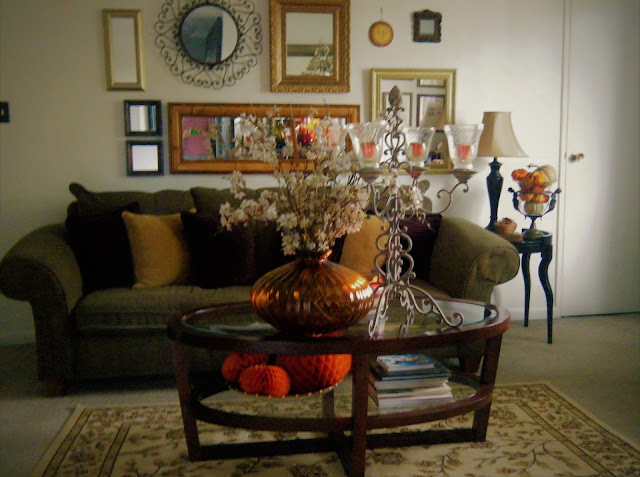 The Empress had emailed a while back and told me I hadn't featured a little tour of the pied de terre recently, as I suspect with Halloween being one of my favorite times of the year, I thought I'd share some of the little touches and favorites things in the abode. With being in Harrisburg during most of the week, it has made me realize just how much I miss my abode when I'm not home. I miss the place and neighbors and friends. Like most holidays many items have a special meaning to them. 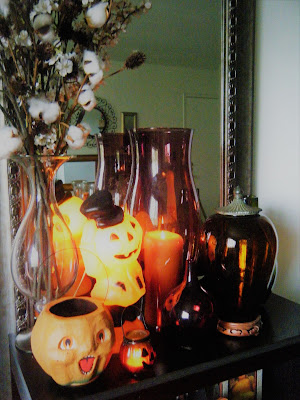 A collection of various pumpkins I enjoy. The light up blow mold and the lantern were my grandmothers from my youth. 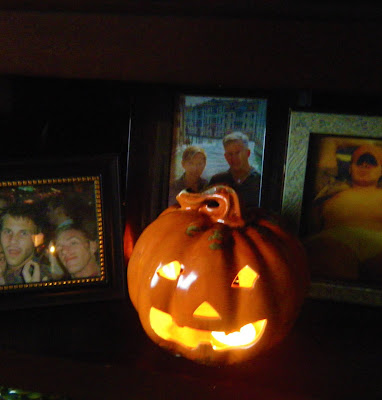 A ceramic pumpkin my mother made when she used to do ceramics classes. 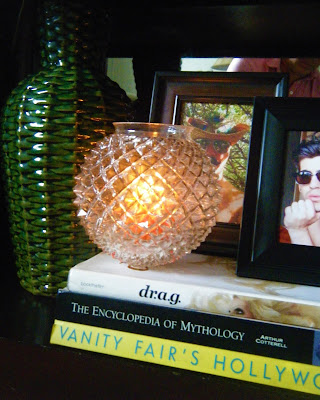 Would you believe this candle holder is actually a light covering I bought for 50 cents? Makes a great candleholder, and the vase next to it is a vase I got for $5 at a market place recently. 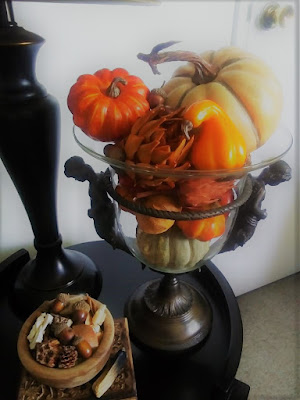 This little wood box and bowl was made by a friend in New Hope who does wood work. I keep my smudge sticks in the little box. I love the smell of burning cedar. 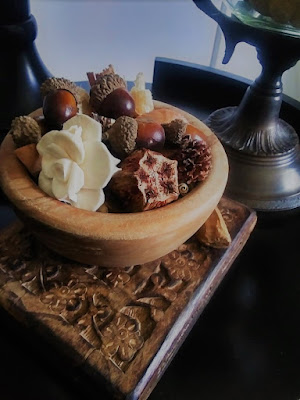 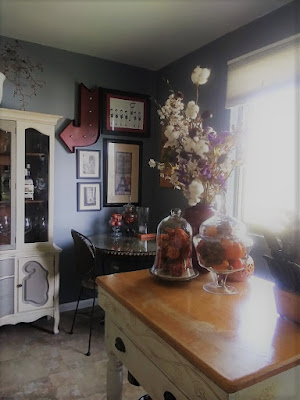 I enjoy my kitchen since it's updates. I miss my little corner nook in the mornings taking my cofffee and it's most time where I read your blogs. Today was spent mostly making some mulled cider and a few apple dumplings 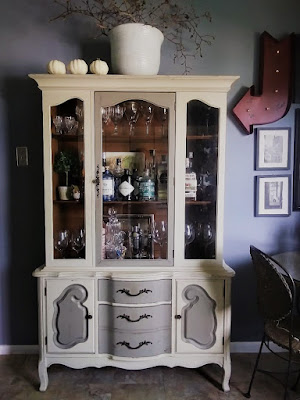 Some of the apothecary jars for autumn, and a few little white pumpkins on the bar top. 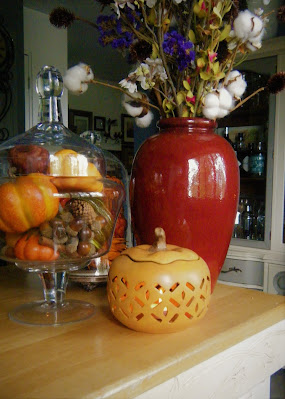 The red earthenware vases was from a very dear, departed friend, and actually belonged to the Eisenhower's, who his father he was related too. I believe he said it was in Eisenhowers study at the family farm outside of Gettysburg. 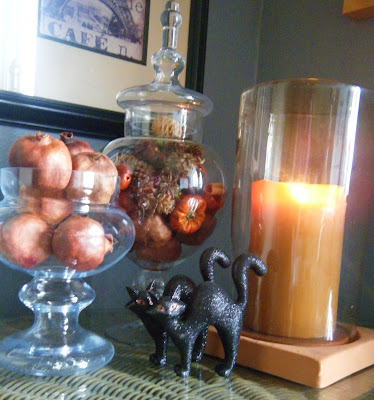 The fun black cats were from the Mother one year. 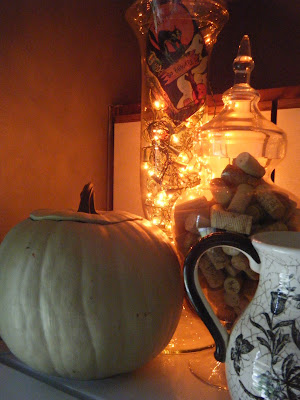 One of my few remaining Halloween cards from my grandmother in the apothecary. 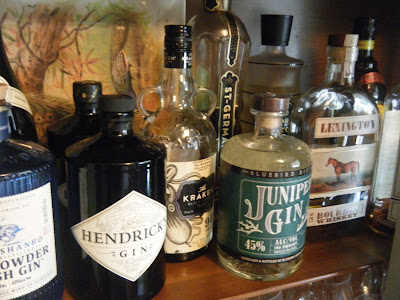 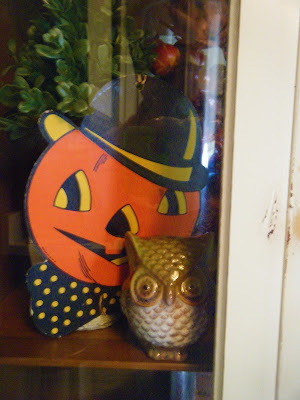 The little owl I love!!!! But it's a mystery to where it is from. I got back home this weekend and my neighbor brought over a package from outside my door. Upon opening it was this little owl with no card or such. I thank who ever sent it...was it one of you? 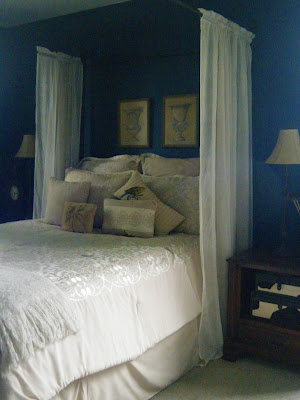 Where some of the magic happens! 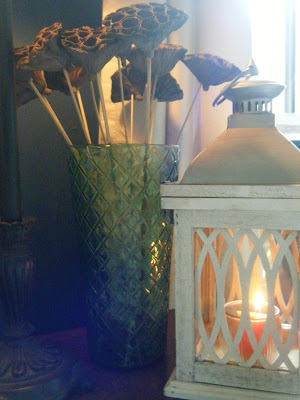 Just found this cut glass vase for a whopping $3 at a antique market. 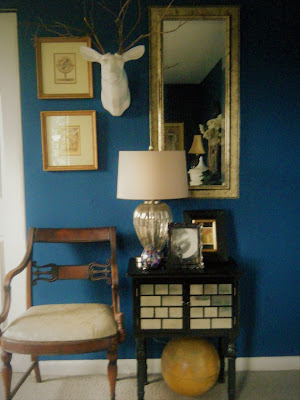 Odds and ends! The chair was once in my paternal grandmothers house. 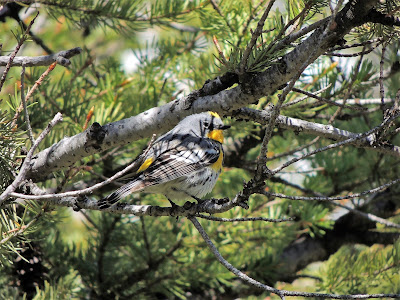 In other news... I saw this Yellow Rumped Warbler in the pine trees out the bedroom windows. First time ever seeing one. 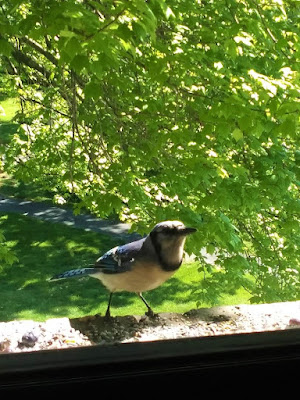 A jay out the kitchen window this morning. As one can see, our leaves have hardly started changing colors yet. 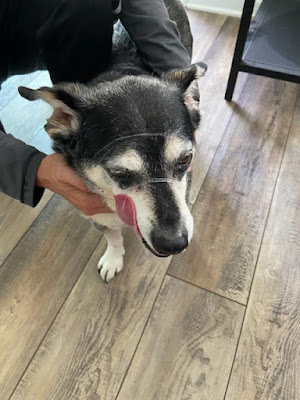 Buster is over it. On a walk, he went right through a huge cob web. He is so over Halloween me thinks. 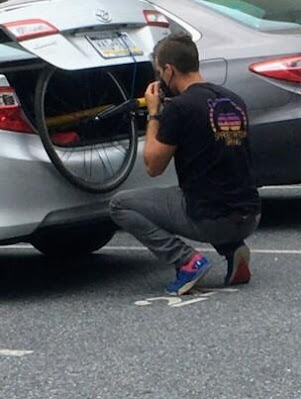 And what's not to like about pulling in Friday afternoon and seeing Lumbersexual getting ready for a bike ride on the trails?  I had him over for dinner last night, a nice quiche and homemade chili. With dessert. I don't think he needed any bike ride today.
Posted by Mistress Maddie