I know I like to cook,and a love a good set of balls, but I don't think I'll be trying any recipes from this book any time soon. If any of you chef tells do, all I say is Bon Appetite!

A Serbian chef has published what he claims is the world's first testicle recipe book. 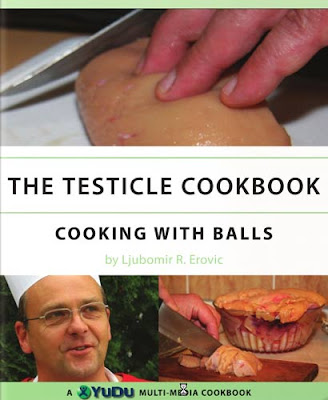 The e-book, available for download, comes with handy video guides showing the Serb peeling the skin off testicles and slicing them up into bite-size chunks.

The ingredients for his testicle pizza recipe include cheese, onion, pepper, bacon and bull's testicles.

"The tastiest testicles in my opinion probably come from bulls, stallions or ostriches, although other people have their own favourites," he said.

"All testicles can be eaten - except human, of course."

Erovic, 45, is self-taught in the art of testicle cuisine but his 20 years of "cooking with balls" make him a world authority in the field.

He also organises the World Testicle Cooking Championship, held annually in Serbia since 2004.

The Testicle Cookbook: Cooking With Balls is published as a multimedia e-Book on yudu.com.
Posted by Mistress Maddie