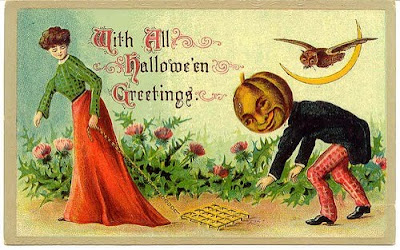 Happy Hallows Eve everyone! I was sitting here wondering today what the history of the day was. So, the curios little creature I was did some searching. The history of Halloween was started by the Celts who lived in the area that is now Ireland, United Kingdom and Northern France, who celebrated their new year November 1. This day marked the end of summer,the harvest, and the beginning of the dark,cold winter, a time that was often associated with human death. Celts believed that on that night before, the boundary between the worlds of the living and the dead blurred. It is believed the ghosts of the dead returned to the earth. To commemorate the event huge bonfires were built where people gathered to burn crops and animals as sacrifices to the deities. Costumes were typically worn to ward spirits off as were lit pumpkins with craved scary faces on them. The night became known as All Hallows Eve and eventfully known as Halloween.

As Europeans came to America, they brought their varied Halloween customs with them. "Play parties" were held to celebrate the harvest, and neighbors would share some stories of the dead, in addition to dancing and singing took place. In the second half of the nineteenth century, America was flooded with new immigrants who were fleeing the Potato Famine of 1846 and would bring with them Irish and English traditions of people dressed up in costumes and go house to house asking for small cakes, treats, or money, a practice that eventually became known as trick or treat, and the craving of the pumpkins would also continue.

At the turn of the century, Halloween parties for children and adults took place and were a way to celebrate the day. Parents were encouraged by newspaper and community leaders to take anything "frightening" and " grotesque" out of the traditions of Halloween, which since then the holiday lost most of it's superstitious and religious overtones. I still love Halloween though, its one of my favorite holidays. Will you have any rituals tonight? And watch out for the dead. Tootles!
Posted by Mistress Maddie at 12:36 PM