In Hibernation -Mars has Attacked

Back in January when the New Year festivities ended, the Mistress said she needed a long break. It had been since August with plans on just about every weekend. So every winter she usually takes the month of January and February and doesn't make any plans. And I have to say it's been wonderful! I have done alot of cooking, finished odds and ends around the house and watched many a movie. Since my hours got cut at work, I now have another day and half to myself. I sometimes wish us humans were like bears in that we could hibernate all winter and recharge. But I have to admit I'm feeling pretty good right now. This weekend the weather is suppose to be in the mid 50s, so I think the Boy-Toy and I will walk around the lake and start our regime of exercises again. Tonight the Mistress was watching the movie Mars Attacks. Have you seen this movie? It was a Tim Burton film about earth being attacked by martians from Mars. It was not very good, but the Mistress did appreciate the campy feel and the visual touches only Tim Burton can create. Plus the movie had just about everyone from Hollywood in the damn thing. And then it occurred to me what to do for Halloween this year. WHAT! Halloween already? Well a queen does have to plan and the Mistress likes to get every detail down. She's thinking about doing the costume of the martian girl played by Lisa Marie. 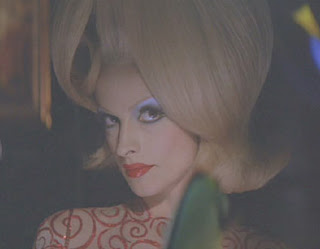 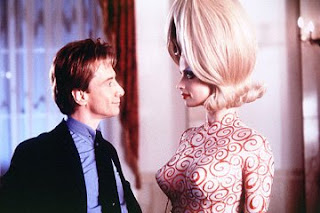 That's right. Lisa Marie Presley. The part captivated me so I had to look at the credits. I think the Mistress could pull this off for Halloween or a show. Here's the clip from the movie. Her walk is eerily spooky,but cool as hell. What do you think? The incredible music is from Danny Elfman. Sounds just like those sci-fi movies from the 50s and 60s doesn't it? And how can you not love that beehive!

UPDATE! Thanks to Chef the City for the clarification on the actress. Every time I googled Lisa Marie I would get the pictures of Lisa Marie Presley. And I wonder how she got that body into that dress! Thanks Chef! The Mistress is still considering this for a look one time.
Posted by Mistress Maddie