Logo's new reality series will be the ultimate in drag queen competitions. The Mistress has been waiting a while to see all the entertainment from this show. And I'm not a big reality show watcher. The premises for the show is nine divias from the US will vie for drag stardom, as RuPaul in full glamazon drag will reign supreme in all judging and eliminations, while Mr.RuPaul will guide the dragtestants as they prepare for each challenge. Dragtestants must remember to embody the charisma, uniqueness, nerve and talent that made RuPaul a international drag superstar. In the end the judges bring the bottom two back to compete in a show stopping battle, and then determine if they will"shante" and stay or "shante" and go away. The Mistress looked at the Logo web site and my three favorites are Victoria Parker and Shannel. I have seen both and know they are very talented and beautiful queens, but I also like Nina Flowers who seems to have a heart of gold. Those are my three contenders as of now.
The first episode will be Drag on a Dime. The dragtestants will have to re-invent their glam looks using thrif store clothing and tschotches from the 99 cent store. Bob Mackie will help weed out the queen with RuPaul, who has the least style. Here are the divas- 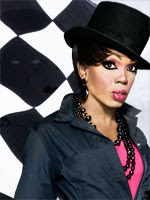 Bebe Zahara Benet ia a native of the Africian Republic of Camerron, Bebe's exotic dignity and sophistication set her apart from the other dragtestants. 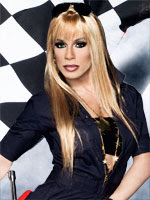 Jade is from Chicago IL who is a professional dancer who has it all- beauty,talent, abs of steel and a great attitude. I'm thinking Miss Congenitilty here. 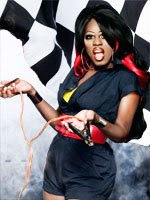 Akashia is a queen who has no problem throwing shade as long as it gets her closer to the finish line. I see some drama from this one. 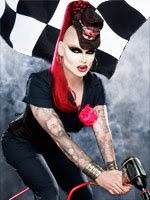 Nina Flowers is originally from Puerto Rico and is known for her intricate make-up and flawless runway presentations. A plus for Nina is she has a mix of styles from punk, gothic and couture. I think she stands a very good chance of winning. 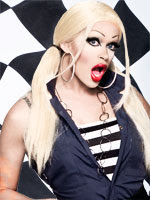 Rebecca Glasscock is the innocent ingenue of RuPaul's race. Under the make-up is a competitive queen. 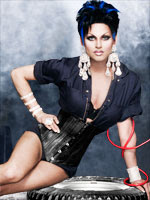 Shannel who is from Vegas is FIERCE! Shannel brings skimpy costumes, a killer body, dazzling wardrobe,sickening make-up skills and truck loads of confidence to the race. She is another of the Mistress's favorites. 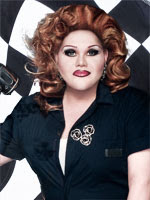 Victoria"Porkchop"Parker is a charmer from the south and has twenty one years experience to bring to the race. The Mistress has seen her before and she is a favorite contender of mine. She will quickly become the "mother hen" to a few of the girls. 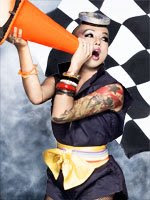 Ongina is from LA and dosen't wear wigs, padding,or tucking, but is still one of the most versatile and focused dragtestants. 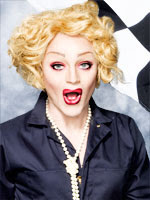 Tammie is a unique performer with her own wacky style. She brings her touch of "old Hollywood" to the race.

So, there you have it in a neat little MAC compact! You will you be routing for?
Posted by Mistress Maddie