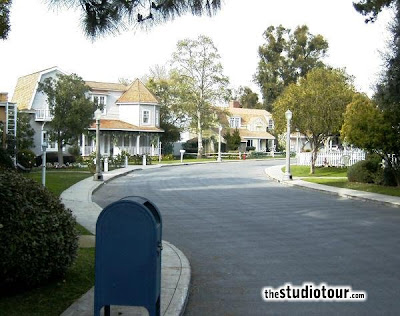 The above picture is the set of Wisteria Lane of the Desperate Housewives .The area where the Mistress lives in Bucks County is a community very similar to this neighborhood where the wives all live. So, yesterday there was a flourish of activity as a dead body was found. And it was only 400 yards away from where the Mistress and company take the train into center city Philadelphia. A man walking his dog made the very grisly discovery yesterday afternoon. The paper said he spotted a human remain in a wooded area about 400 yards from the main road. Police were called to the scene and revealed a skeletal remain, but could not determine if it was the remain of a male or female, but did say it belonged to a adult. Bucks County forensics squad cordoned off the area where the remains were found and were combing the area all day Tuesday and Wednesday. The badly decomposed body was removed around 4:00pm. When I heard this I said to Boy-Toy that is very disturbing knowing you are taking walks or waiting for the train and only 400 yards away there has been a dead body lying there! It seems to me it also had to be there some time, because I don't think a body would waste away to what was left in cold weather. So I'm thinking it must have been there since this summer and no one ever saw the body, not to mention saw anything that might of happened. This is just creepy as hell!
Posted by Mistress Maddie