Drag Race fans and the world of drag queens were all shocked to hear about Sherry Pie's recent disqualification from the show. When I saw the feed pop up on my reader, I was in shock! The Sherry Pie?  It was in disblief. And in light of recent developments and Sherry Pie’s statement, Sherry Pie has been disqualified from RuPaul’s Drag Race 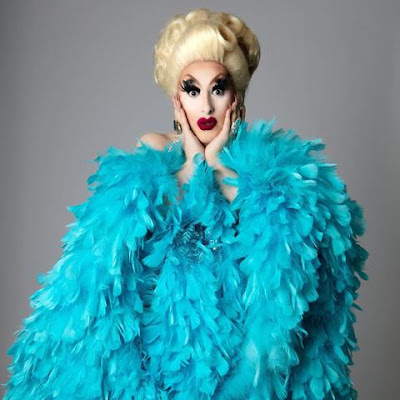 Ahead of Sherry Pie’s debut on Season 12 Friday, aspiring actor Ben Shimkusmany accused Sherry Pie of posing as a casting director named Allison Mossey to coax him into submitting a fake audition tape with exploitative material. Shimkusmany – who studied musical theatre with Sherry Pie at State University of New York College at Cortland – claims he submitted a tape to Mossey in pursuit of a supposed role at Playwright’s Horizons in New York City. He received Mossey's information from a mutual friend.


Shimkusmany says he had to film scenes that he felt were particularly sexual and awkward, but the oppuntiy seemed to good to pass up.Five other actors and friends of Sherry also say they were catfished and coaxed into providing humiliating and degrading "audition" tapes by Gugliemelli, who again posed as casting director "Allison Mossey"  in emails and as the production assistant too. But no one ever met either of these people in person. Two more accusers came forward Friday, bringing the total up to 7. One of these guys, Daniel Marandola, said he and Sherry had met at the Ritz Bar, where they becamse close friends, and he stated there was nothing ever cpreey about Sherry , she was just a friend, and he says Sherry always very much reminded him she didn't see him as "anything other then a friend, she wasn't into guys that looked like him, so don't get it twisted." Marandola says his "casting process" with the person going by the name Allison Mossey continued via email until December 2019 and involved  him making degrading audition tapes, some which involved sex toys and masturbaiting-  all the while, Maradola and Sherry, together ran a weekly drag show at Rebar. All the other guys had similar stories. The real sad part is these were Sherry's friends. Now THAT'S TWISTED!


I was in total shock reading this. She had done several show here in Philly and New Hope, and she always had me in stiches. She even referred me to her designer Florance D"Lee to me to have my Shape of Gin ensemble done for a calendar project. I even went as far to place her in the top 5. I think the show made the right decision to dis-qualify her. Activity like this won't be torlated no matter who or what sex the person is doing this kind of inappropriate behavior. Such a shame, as this is bound to wipe out a long and successful drag career. My question I ponder also is what went through the minds of some of these guys when they were performing for the "audition tapes". If they are legit auditions for Broadway, Hulu or HBO...why would they be be letting themselves get talked into lewd sex acts? The only outlet where audiotns go like that are in the porn industry. Not that I,  by any means side with Sherry. Is it just young and desperte to get a big break? I rememeber years ago a Ambercrobie model who sued a photographer for telling him to jack off to relax him, and somehow they ened up filming him in the act. The photographer loss his job, and the model won his case,  but the judge did not award him the money he seeked, wondering why he didn't use better judgement in an auditon, where he would be modeling clothes.  Cards on the table...I remember when a interior design firm I worked for closed years ago. So I was out of work for some time. A friend suggested I apply for visual design at one of the department stores when I was still in Harrisburg living. While out one night, I had met a guy and we struck up a conversation. After some time, it came up I was interviewing two days later at a department store for a visual stylist. Turns out, he was the HR assistant where I was applying. After some time talking, his other half came up and was talking with us, and  left about half an hour later. The HR guy told they found me attractive and if I went home with them for a threesome, he'd make sure my resume was the only one the Visual Manager would see. Stupid young me, took the bait. and spent the night with them. I felt sick the next day. With my creditals I could have gotten it on my own talents...but was starting to panic being unemployed.  So I guess we never really know ones driving force.

Should be an interesting season of drag race. I firmly believe the show will edit Sherry out of everything they can if able,including her runways. Stupid, dumb cow? What was she thinking.

What's your thought on the sides?
Posted by Mistress Maddie