What the Smurf is Going on? 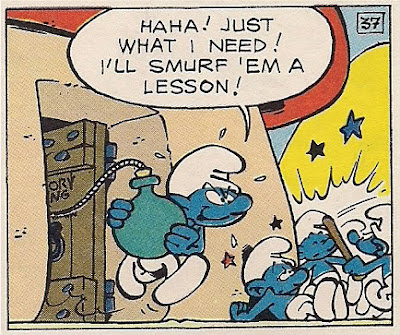 Happy Monday everyone! The Mistress is ready for a full work week, I just hope I can do a full week! Over the weekend I saw more damn previews for the Smurf movie. They are wearing that movie out. And there appears to be major smurfing endorsements all over the place. After I left the pool Saturday, we stopped at Micky D's. I got a happy meal and , you said happy meal? Yes, because the potions are small!!! Anyway I was asked what smurf figure I would like. Ahhh memories. I had quite the collections of smurf figurines when I was young. And they have also invaded the SyFy channel ads!
Damn this SMURFS movie, they are going to ruin my Saturday morning memories! I don;t care to see them in New York City causing antics with the ever hot Neil Patrick Harris, and lets face it, if anything saves this movie it will be him! Swoon. Where was I? Oh ways to seduce Neil, no... I mean the smurfs. Do we really need a movie? Why not another cartoon on Saturdays? And I always though Smurfette was a bit odd.The Smurfs' lone lady is an easy target for the blue-male gaze or much cat calling and smurfing.Gargamel isn't the first to notice the 99-1 gender ratio: For a long time, people have been saying there's something odd about Smurfette, the lone female smurf. 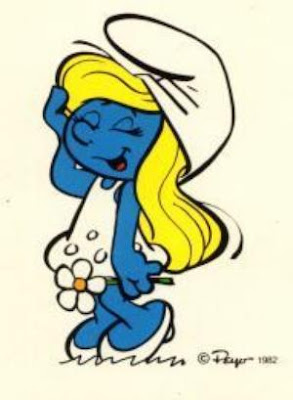 In Smurfette's case, the explanation for why she's the only girl in town came when she debuted in a 1966 Smurfs comic book strip. It's like this: Gargamel is always looking for ways to capture the Smurfs. Recognizing that his enemies live in an all-male community, or in modern terms, the Castro, he creates a girl version "with a big nose and wild hair," who "didn't originally look like much" (from Smurfette's official bio) to spy on the Smurfs and cause jealously among them. The plan backfires, because, lets face it, there all gay, when Smurfette decides she wants to become a real Smurf, and Papa Smurf casts a spell that transforms her into the blonde, "charming Smurfette that melts the hearts of the other Smurfs. I aint buying this one bit. Papa used a wig, some quick make up tricks, and was handy with a sewing machine! I think smurfette is a drag smurf! Just look at that catty look on her face would ya. 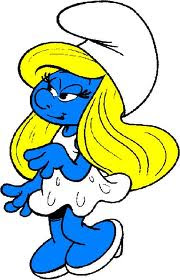 And what female likes playing with bugs? And what woman likes wearing really high heels? And I just always assummed Papa Smurf was the daddy and the rest were his bitches! 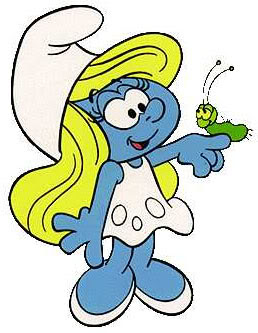 And while I'm at it,am I the only one who remembers Hogatha, the evil witch seen from time to time? And did the Mistress really just do a whole post on all this smurfing business? 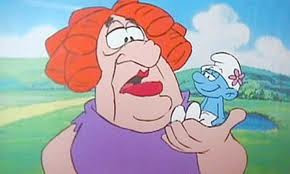 Email ThisBlogThis!Share to TwitterShare to FacebookShare to Pinterest
Labels: Just for fun, smurfs