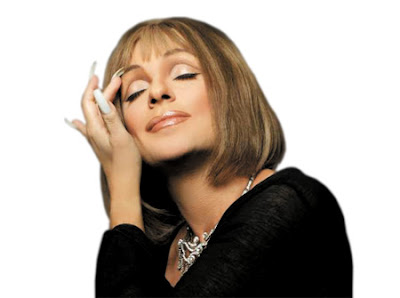 STEVEN BRINBERG is the premier Barbra Streisand impressionist, performing his incredible show, “Simply Barbra”, to international acclaim both on stage and on television as he pays homage to all that is Streisand! Steven does not lip-sync his performances, but accurately portrays Streisand with his own voice! Steven Brinberg has appeared as a special guest with Marvin Hamlisch and the Symphony Orchestra’s of over a dozen cities across the country and was even hired by Miss Streisand’s management to perform at her best friend Donna Karan’s birthday party! With over a decade of performing experience, his amazing show has Mr. Brinberg in demand literally worldwide! And tommorrow I'll be going to see his caberet act in New Hope at the Nevermore! Brinberg discovered his talent for imitating voices while growing up in New York, often trying to sing like Streisand and Shirley MacLaine. But it wasn’t until after ten years of professional acting and singing that he performed a whole show as Simply Barbra. Brinberg’s sparkling wit, physical mannerisms and vocal prowess make Simply Barbra the ultimate homage to all things Babs, but the performer rejects the drag tag. He says in America people have problems separating what he does from typical drag -” that can be fun but it’s not what I do, he said. I have heard he is excellent and can't wait to see Simply Barbara!


Posted by Mistress Maddie at 8:23 PM