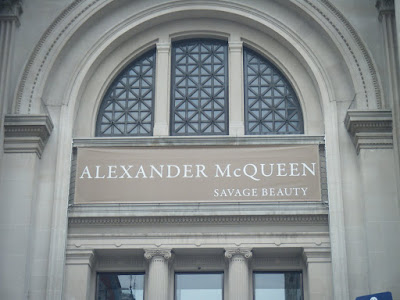 Well the Mistress is back from a very wonderful weekend spent with her dear friend and sister Mame, aka David Dust and meeting the fabulous Designing Wally from over at A Queen's Queen. More on the later, kids. The main reason was a long overdue visit to The Metropolitan Museum of Art to see Alexander McQueen: Savage Beauty. And what a moving experience. Mame even said we should leave earlier than we planned, and decide to be there by 7:30 am. Yes you read that right. No small feat as the night before we put away three bottles of wine easy. Went down like mother's milk. But we made it there on time. Miracles never cease. And to our surprise, the line wasn't to long when we got there. Mind ya, this was the wrong line we got in when we got there. But it worked out to our advantage as we became members of the Met, and got in a hour and a half early before the general public. So worth it!!! We had NO IDEA just how good it would be. When we left for the day we understood the time limit was up to 5 hours long to get in!!!! Here's a few snaps. 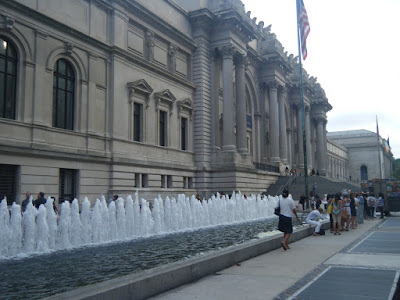 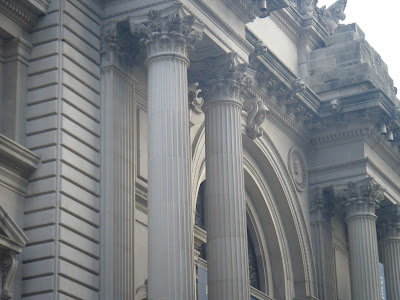 Like many Americans of my generation, I came to be a fan of Alexander McQueen through his work for Givenchy in the late '90s. I had been following the designer long before his death. My interest reached a fever pitch with his collection titled Romantic Gothic in 2006. None of this prepared me for "Alexander McQueen: Savage Beauty" which was on view at The Costume Institute. It was a very moving, probably, hands down, the best fashion exhibit I have ever seen!!! The Met did a wonderful job rigging the mannequins, and each room decor was done to play back with each collection, not to mention the haunting music and the video footage from all his shows was a nice touch. I felt sorry for Mame, because I knew I'd be in their for the long haul. And I was pretty much speechless for the whole exhibit.

The first pieces you are confronted with at the entrance of this intense exhibit space are from the Spring 2001 Voss collection, a collection very focused on beauty and perhaps less sinister than much of McQueen's work. A red ostrich-feather dress and a sculptural white razor clam shell piece give the viewer an idea of the world-class craftsmanship they are about to witness at arm's length. And the top of that red dress? Made completely out of glass laboratory slides painted red!!! That's talent. 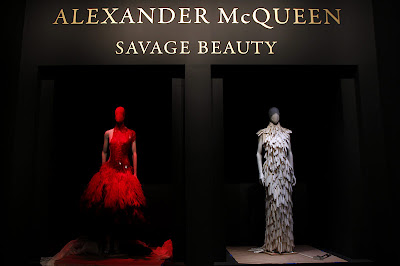 After the first room that featured his first collection, Voss,we are quickly ushered into the darker, masochistic facets of McQueen's personality and design as we explore the Romantic Gothic room, probably my favorite, and the Cabinet of Curiosities. In one quote McQueen talks about how people view some of his more violent work, his bondage and fetish influences come to mind. He explains that to him these phenomenon are not aggressive but romantic. 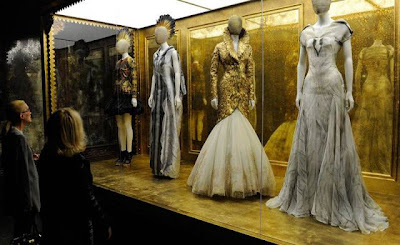 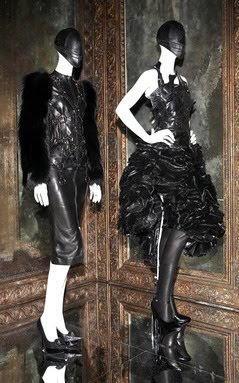 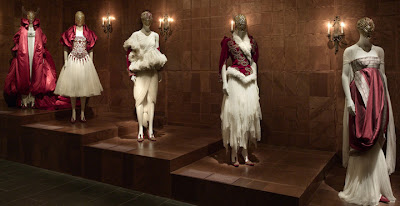 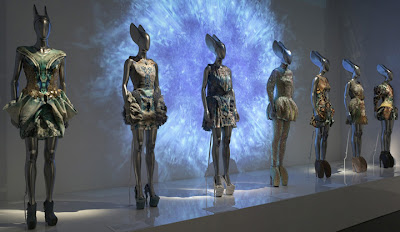 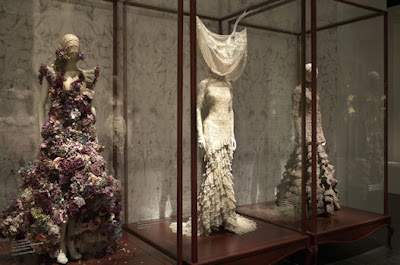 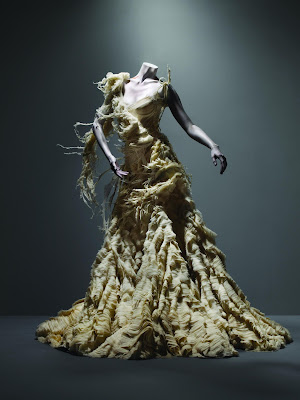 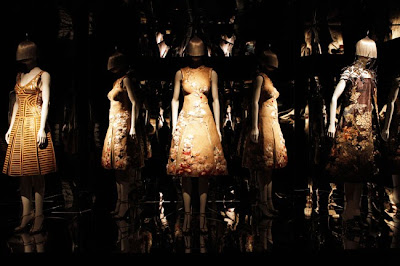 Poor Mame was sitting outside the McQueen exhibit when I finally came out. And I was very visually and mentally exhausted, as I took in every last detail. I found this video you can watch. I plead and beg you will watch. IT IS EXCELLENT! And really captures the feel of the event and the music of the exhibit if you couldn't make it. Again, very moving.

UPDATE-It's rumored that the exhibit may be headed to London in some capacity.
Posted by Mistress Maddie at 9:13 PM