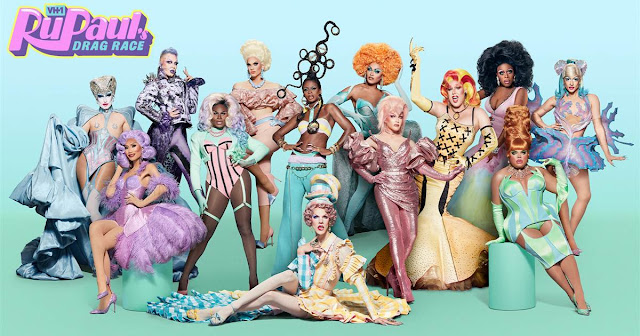 I just knew this Nice Girls Roast was going to be  as smooth as the flight from Airport 1975, and I felt like Mrs Devaney, I felt a little queasy. The attitude I guess. I had a bourbon ..with a beer chaser to get through the show. Sorry, but I think this episode was absolutely hilarious but for all the wrong reasons, much like Mimi Imfurst's make-up. The Drag Race roast, like most seasons usually goes over like a fart in church, and tend to be disaster. I'd say the anxiety it produces is roughly on par  to when  Darienne Lake takes off her girdle and most around her hoping they aren't injured with a flying roll. The drag roast combines just about everything Ru looks for in a queen: big personality, cutting wit, and the ability to roll with the punches and react to an audience, and hit your mark. There should be no question as to who's got the chops. Thats acting talent to you Kandy, not the ones you eat. 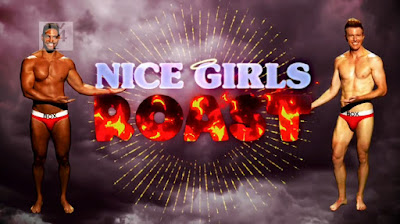 To further un-nerve the queens, there was no in-studio audience beyond the judges and the three former Miss Congenialities, Nina West...heyyyyy Nina...Valentina and Heid N Closet, who showed up to be the targets of the season. Watching Heidi's facial expressions for me was even funnier than the roast itself! But the queens themselves didn't even target many of the jokes to them, unless it was editing. So my picks this week for the best in show. 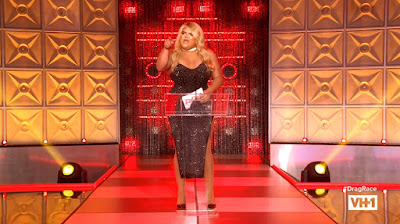 Like it or not, Kandy did kill this challenge. This culminates in Kandy's first,  and I suspect her only win, and it was richly deserved. She even looked the part of a rough and tumble wise cracking New Jersey comic...which sleazy is in her wheelhouse. But having seen her in Brooklyn, I knew Kandy has the ability to kill on a mic. In this group, personality alone is plenty to launch her into the top, and she had plenty of jokes which all landed and had most, including her other dragtestants in stiches. In my opinion, she's better than the fans thinks she is, but not as good as RuPaul seems to think she is. So I say let her have the win. If Kandy doesn't do well this week, and goes against Olivia...I think we will know that outcome. I think the top four is already a done deal. 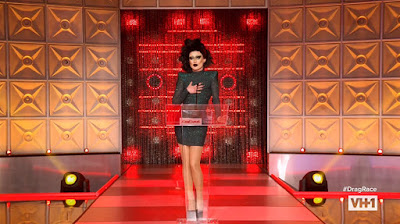 Gottmik brought me a chic looking Joker with less make up. I was very surprised she did as well as she did.  A fashion queen who can win Snatch Game and do a roast??? Gottmik may not have won, but she certainly did bring it overall. But this time around, she nailed the jokes and looked really chic to boot.
Of course...I think I knew Olivia, Symone and Utica would struggle. Watching those three, I would have rather had a root canal. I think it's safe to say Olivia will be heading out next. The last couple weeks, I'm just not feeling her. At this point she really is just a two note act. She managed to land one real good wise crack. Someone need to give girlfriend a handbook and crash course hunty in mean girl! But let's be honest....Utica delivers a veritable Hindenburg crash of a performance, taking out half the studio. The problem with Utica's performance is she is a art queen on Drag Race which is fine, but they tend to be very stubborn about it, and won't step out of the box. And she has the unique look. What's the difference between Utica and E.T? Their both monsters that have ridiculous cheek bones, but E.T can act and take direction!!! I adore Utica. But I think us and she, was ready for her exit.
Symone's a top queen no doubt. Although she bombed again in this challenge, it wasn't as painful to watch as Olivia and Utica...which surprised me they both weren't in the bottom. But Symone did come undone a bit, with too much dead air. But she is still charming the judges. And I LOVED her gold look. 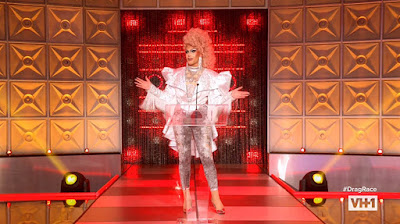 Didn't hate Rose', she was pretty funny and confident. A little roast isn't nearly enough to spook a queen used to riding the C train in full drag at 4am. Rose's has the same comfort in front of a crowd as Kandy, but got edged out in the joke department by Kandy and Gottmik. Loni's critique is on point. Rose' did seem better in rehearsal. This Florence D Lee look was unique, but not one of my favorites on Rose' I wouldn't be surprised if Rose' wins one or two more challenges yet. her consistency is a force to be reckoned with.
When it comes to the bottom two, it's Utica and Symone, and I thought the lip synch was actually pretty good! Utica is definitely in her euphoria when performing and isn't that what drag is all about? I felt she got a bit shortchanged, she was working that stage and that body in crazy sways.... but as always, one queen seems to be suited for the song more then the other. Not that it mattered. Her stubbornness and her somewhat nastiness were ultimately what doomed Utica, not her envelop-pushing freak flag- flying...which for the most part the judges loved.
Now, in my opinion Utica had by far the best runways looks of the season- hands down, week after week. And she sold them! 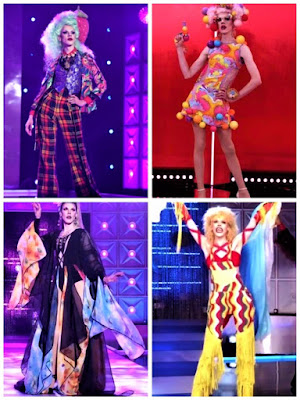 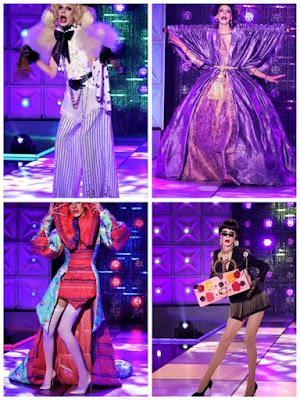 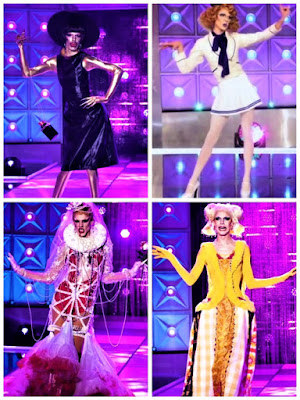 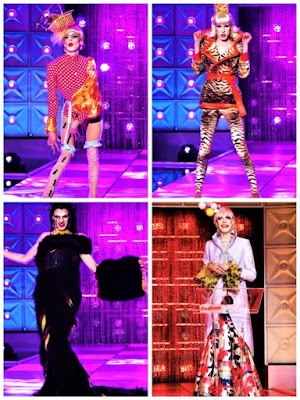 Now in honor of this fabulous queen....here's Goldfrapp with Number 1 !
Next week, there will mostly likely not be spilled tea, as I'll be busy with things at the ancestral home while visiting...but brace yourself kids....Kandy will be top four. I bet my balls on it. Well, let's not go nuts. If Kandy makes top four Sixpense will give everyone French lessons.
Posted by Mistress Maddie