Another Tale of Mamie and The Mistress 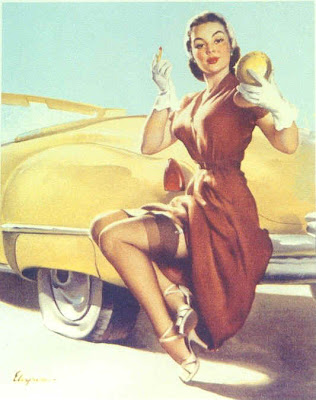 Just like the picture above, this reminds me of another tale of my good friend and sister Mamie,AKA,David Dust, and myself. That,and a comment he made the other day to a post regarding a small teenie-tiny altercation we had with the car. It was years ago when we were partying one night out in Harrisburg. It was one of those nights we most likely looked damn good and sexy as hell. We were having a high-ho time dancing our asses off. And drinking our picked poisons of the night. Later we got invited to a wonderful little after hours party by a guy in town who was known for fabulous parties where you could find anything you wanted, and some things you didn't. Well being young and fabulous , our gang of friends decided we would all go to the party for more fun and debauchery. Never mind now that there had already been a pre-cock-a-tail party, lots of drinking out at the club and now a after-party! So Mamie and I take to our buggies since it was only five blocks away. Upon arriving at the location of said party, the Mistress starts to scout out a place to
park. Seeing nothing close to the house, I circled the block again and remembered seeing a parking lot across the street. So Mamie is still following me. Upon going around he block again,I pull into the parking lot of a swank historic apartment building, The Simon Cameron School. As I enter the lot the Mistress hears POP! Then another POP! Once in the lot I stop and look to see if Mamie is still following. And in Mamie comes right behind me and POP! The only thing was Mamie was smart not to pull the whole way in. Turns out, we ran over some spikes they use to keep stupid queens who are to drunk to read the Stop! Do not ENTER sign. Oh. I some how managed to back my car out,not popping any more tires. And we finally park on the street. Mamie and I panic at first, then start laughing. Our good friends,Vera and Winfred asked what we were going to do? Mamie and I always had our priorities straight and looked in the window reflection to make sure we looked good and said " We will worry about it later, we have a party to tend too!" Mind y'all I have two flat tires and Mamie has one flat. After another two hours Mamie changed her tire, or more like had a hot papi change the damn thing. The Mistress meanwhile only had a donut in the trunk so she needed a lift to her ancestral home to get a full fledged tire. One of the cute boys that she worked with was ever so kind to give her a ride to fetch the
tire. The twenty minute trip to the home turned into a return to the spot a hour and a half later. Never you mind what took so long! Ahhhhh, good times! The next day I believe we both made trips to purchase tires with really bad hang overs! The ironic part of the story is years later I ended up living in the historic Simon Cameron School Apartments and had my own damn parking spot. And while living there I can't tell you how many queens flattened tires on those damn spikes!!!
Posted by Mistress Maddie

Email ThisBlogThis!Share to TwitterShare to FacebookShare to Pinterest
Labels: Mamie and Mistress stories