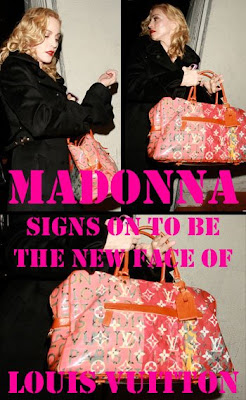 Wondering why Madonna has been seen cozying up with Vuitton designer Marc Jacobs in Hollywood? Or why Madge is carrying a garishly orange LV purse recently, when she isn't a big purse carrier like other high profile celebrities? Well,its' because Madonna has signed on to be the new face of Louis Vuitton's 2009 ad campaign for a reported $10 million bucks!!!! A week ago while working in the store,our Marc Jacobs vendor rep was telling me they signed a major name for the new model but wouldn't give any information other than that. I guess that will help her move forward from Guy Richie!
Posted by Mistress Maddie at 7:41 PM

Email ThisBlogThis!Share to TwitterShare to FacebookShare to Pinterest
Labels: Madonna