Put on Your Pride... and Condoms 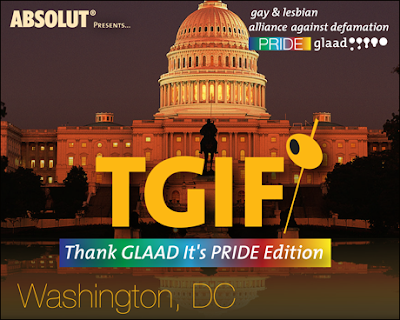 Well dear ones, the Mistress and Boy-Toy decided to switch things up this year and fore go all the entertaining of guest and the Philadelphia Gay Pride festivities here and go to visit with our good, close friend, Patty Passaround in Washington DC. We haven't seen her in some time, so we are hitting the Washington DC Pride festivities instead. Washington is a very beautiful city and I'm excited about getting back down their to see the city, it's been so long! While there we'll stay with Patty where I'll dispense some interior design advice for her new abode, hit the pride festival, parade, and the charity booths, plus some good old fashioned cock-a-tails- and debauching;) While there, the First Lady, Michelle has been just annoying the hell out of the Mistress to take a high tea with her in the south gardens to discuss world affairs and some of the Mistress's secret cock-a-tails! But I said "Look Shelly, I'm there for pleasure travel, I can't think to heavy on things after a taxing week, but your more than welcome to go see the gay boys at TOWN with us! And you know at these things everyone and there mother will be passing out prophylactics. I'll come home with a lifetime supply!!! And have you ever noticed how many different varities of prophylactics there are. I never know which one to use.

Nike condoms: Just do it.
Toyota condoms: Oh what a feeling.
Diet Pepsi condoms: You got the right one, baby
Pringle condoms: Once you pop you can't stop.
Secret condoms: Strong enough for a man, but pH balance for a women.
Macintosh condom: it does more, cost less, it's that simple.
Ford condoms: The best never rest.
Chevy condoms: Like a rock.
Avis condom: Trying harder than ever.
KFC condoms: Finger-Licking Good.
Energizer condoms: It keeps going and going and going...
M&M condoms: It melts in your mouth, not in your hands!
Doublemint condoms: Double your pleasure, double your fun.Oh My !
Delta Airlines condoms travel pack: Delta is ready when you are.
Shell: Watch us grow
McDonalds: I'm lovin' it
Gatorade: is it in you?
Yahoo: dreams found faster
Volkswagon: Drivers wanted
Glade: Plug it in, plug it in. Sooooooooo, the Mistress is taking a few days off and I'll be back next week some time, you know, sometime after recovery. Hope everybody has a fabuuuuuuulous weekend! Tootles!
Posted by Mistress Maddie

Email ThisBlogThis!Share to TwitterShare to FacebookShare to Pinterest
Labels: Just for fun, pillow talk, the Mistress