Arvin Is All Over the Mistress's Library

Anyone who knows the Mistress knows she loves herself a good Eric Arvin book. You know that talented writer who also happens to be hunky? Eric Arvin is a wonderful writer and resides in the same sleepy Indiana river town where he grew up. He graduated from Hanover College with a Bachelors in History, and is a fan of the writing of James Purdy. He has lived, for brief periods, in Italy and Australia, and also survived brain surgery, during which they apparently added enough sense for him to decide to write full-time. He has since become author of several successful novels, one naughty comic, Kidd Christmas, as well as his blog, Daventry Blue. The Mistress has all these titles, although I haven't had time to read Simple Men yet. But don't you love the cover art? I love to read all year long, but it seems in the summer I really fall behind in reading. Especially on the beach. Have you tried to read when your surrounded by eyecandy? You can read what the Mistress though of his titles she read here,here, and here.

Well y'all Eric has re-released one of his titles in a reprint, The Rest is Illusion. 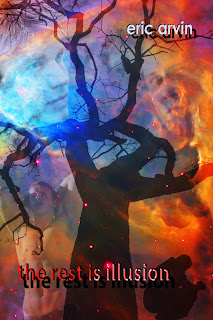 A coming of age story with a supernatural bent, set on the campus of Verona College. The story centers on five students whose lives are further complicated by an unseen force that surrounds the college, changing them forever. Leave it to Eric and Young Offenders Media who present The Rest Is Illusion book trail or! Looks like I'll be ordering another Arvin work! Be sure to check at his works and show your support and stop by his blog to say hello!

The Rest is Illusion - Book Trailer from Pat Nelson Childs on Vimeo.