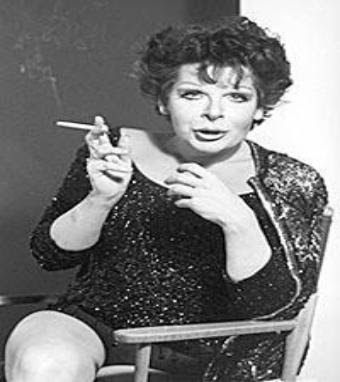 Craig Russell was a Canadian female impersonator and drag known by the stage name of Craig Russell. And the Mistress considers him one of many drag legends. His impersonations were right on, better than most I have ever seen, and in most cases uncanny, including Carol Channing, Bette Davis, Mae West, Barbra Streisand, Tallulah Bankhead, Marlene Dietrich, Bette Midler, Anita Bryant, Shirley Bassey, Peggy Lee and Judy Garland. No easy task, with so many to do. While performing, he always spoke and sang in the voices of the celebrities he was impersonating. As a teenager, Craig Russell became president of Mae West's fan club and he briefly worked and lived in Los Angeles as her secretary. He returned to Toronto where he moved in with the writer Margaret Gibson. He worked as a hairdresser while pursuing his career as a stage performer. By 1971, he was a regular performer in Toronto gay clubs and had a burgeoning international following. One of his most famous impersonations was his jabs at homophobic Anita Bryant. This clip is hilarious! And uncanny!

In 1977, Russell starred in the film Outrageous!, based on a short story written by Gibson about their time as roommates. A decade later, in 1987, he starred in the sequel to Outrageous!, appropriately titled Too Outrageous! Russell's friend Stephen Jon Postal and his wife, Guia Dino Postal based a character, Kevin on his teen age life in their book, Of Margaret and Madness.He fathered a daughter, Susan Allison, who was born January 6, 1973 in Toronto. Father and daughter developed a relationship in the years prior to his death. Although he publicly identified as gay rather than bisexual, Russell married his close friend Lori Jenkins in 1982. Russell remained married to Lori until his death in 1990 of a stroke related to complications from AIDS. He was cremated and buried at Pine Grove Cemetery in Port Perry. This though is my favorite clip of him impersonating mother and daughter, Judy and Liza. Just genuis how he transforms from Judy into Liza right their on stage! What a talent and legend. I hope your entertaining in the sky sister!

Posted by Mistress Maddie at 4:30 PM