The Beauty of One Building 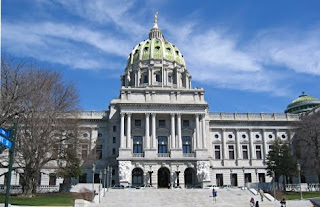 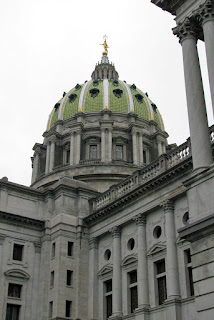 Over the lovely weekend, the Mistress decided to take a walk and stroll through the streets of Harrisburg, my old stomping grounds. One of the best kept jewels of the city is it's grand state capitol building. It, to date, is one of my favorite buildings to study and just to admire. Every time I'm there, and there has been a tons of times, I still always manage to see something new again. And the architecture is just so elegant, regal, and from a time long ago. I often would just walk around the grounds, or sit and read there, and I have taken the public and private tours many a time. I probably drive the Boy-Toy nuts! I think once, I might have even slept in one of the gardens when the Mistress had to much spirit one night!!! The Pennsylvania State Capitol is the seat of government for the U.S. state of Pennsylvania and is in downtown Harrisburg. It was designed in 1902 in a Beaux-Arts style with Renaissance themes throughout. The capitol houses the chambers for the Pennsylvania General Assembly, made up of the House of Representatives and the Senate, and the Harrisburg chambers for the Supreme Court of Pennsylvania, as well as the offices of the Governor and the Lieutenant Governor. 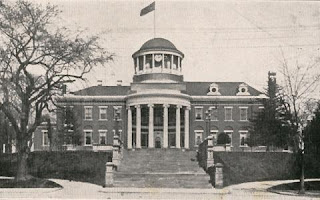 The first, the Hills Capitol, was destroyed in 1897 by a fire and the second, the Cobb Capitol, was left unfinished when funding was discontinued in 1899.
The Pennsylvania State Capitol houses the chambers for the Pennsylvania House of Representatives, the Pennsylvania Senate, and the Harrisburg chambers for the Supreme Court of Pennsylvania. The Capitol contains 475 rooms and has four floors, not including a mezzanine between the first and second floors, and a basement. The bronze entrance doors of the capitol lead into the rotunda on the first floor with the grand staircase in the center. 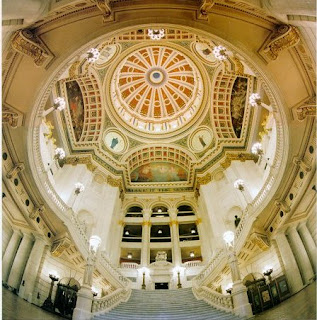 The staircase in the rotunda is an imperial staircase, similar to the one in the Paris Opera House in Paris, France. 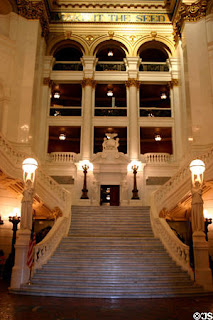 The staircase leads to the mezzanine between the first and second floors, before splitting into two staircases leading to the second floor. Edwin Austin Abbey painted four allegorical medallions around the base of the capitol dome, detailing the "four forces of civilization": Art, Justice, Science, and Religion. Four lunette murals were also painted by Abbey and "symbolize Pennsylvania's spiritual and industrial contributions to modern civilization". The lunettes are situated in the recesses of each arch in the rotunda. The rotunda is paved with tiles, hand-crafted by Henry Chapman Mercer, from the Moravian Pottery and Tile Works. Mercer produced 1,600 square feet of tile, which includes "377 mosaics, representing 254 scenes, artifacts, animals, birds, fish, insects, industries and workers from Pennsylvania history". The ornate Goddess statue lamp posts are seen throughout the building and are very special Austrian cut crystal. The way they have been cut gives the illusion of a letter "x" in the middle. 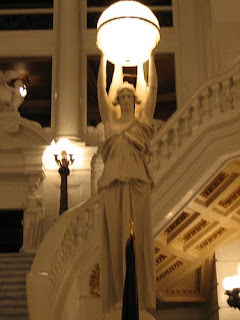 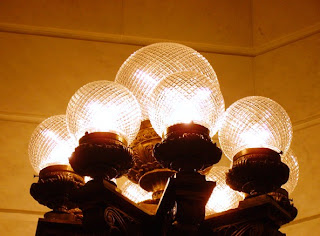 The lower house of the bicameral General Assembly, the House of Representatives, has 203 members, is the largest of the three chambers at 90 feet wide and 120 feet long. It is located on the south side of the rotunda. The House Chamber was designed with an Italian Renaissance theme. William B. Van Ingen created the fourteen circular, stained-glass windows in the House Chamber, and Abbey painted its five murals. The chandeliers that are seen only weigh in at one ton. 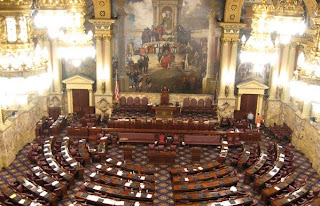 The Senate is the upper house of the state legislature and has 50 members. The 95-by-80-foot Senate Chamber, or Hall of the Senate, is the second-largest chamber and was designed with a French Renaissance theme. It is located on the north side of the rotunda, opposite the House. Violet Oakley painted the murals in the Senate Chamber. Ingen also made 10 stained-glass windows for the Senate Chamber. Both the House and Senate Chambers are on the second floor, each with an entrance on the third and fourth floors leading to a press gallery. The chandeliers here too weigh in at a ton. 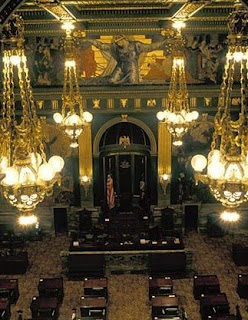 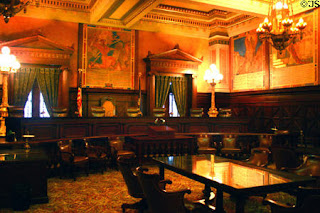 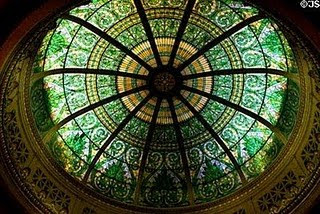 Every year it keeps getting voted the most beautiful State capital building in the country and it is easy to see why. The huge fountain in the addition is also a wonderful place to cool off in the heat of summer. I remember sitting there also feeling the mist from the powerful streams. And not to mention many a drag photo opt was taken their.

Till the day I die, I think this may be one of my favorite special places to see. Who knows, maybe the state will let me lie in state their!!!
Posted by Mistress Maddie at 7:00 AM