So it's been a busy time the last two weeks for me, hence my lack of posts and visits. I had been called away to another store in Boston and got back on Friday.  When you have some down time at work and receive good store visits , it is one of the downsides that you get to be sent all around to help create visual delights. But I take it as a huge compliment. This trip saw me over seeing some new designer shops, some window changes and some fun projects as well.

I will have to say, 90% of this store has had a $110 million renovation. I just had to share a picture of the stunning facilities!!!!!!!! Have you ever seen a restroom so big!!!!! And each stall was totally enclosed with a frosted glass door!  I was very impressed. I generally dislike public restrooms and try to avoid them. But this was like paradise. 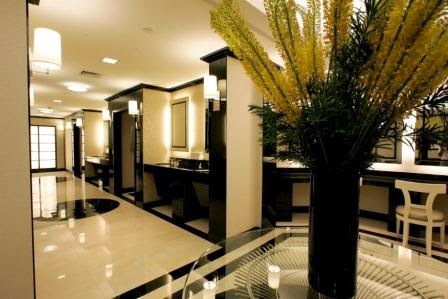 My one, and what was to be my easiest task took two days!!!!!! With prom season approaching, we wanted to come up with a creative way to announce the upcoming prom event, so I though why not incorporate the store imagine into the prom event itself. So I came out with three different dresses for advertising of the event, made entirely out of the three sizes of shopping bags we have. Turned out pretty nice  I thought. But what a pain. They will hit the floor later this week with signing added to them to announce the event. 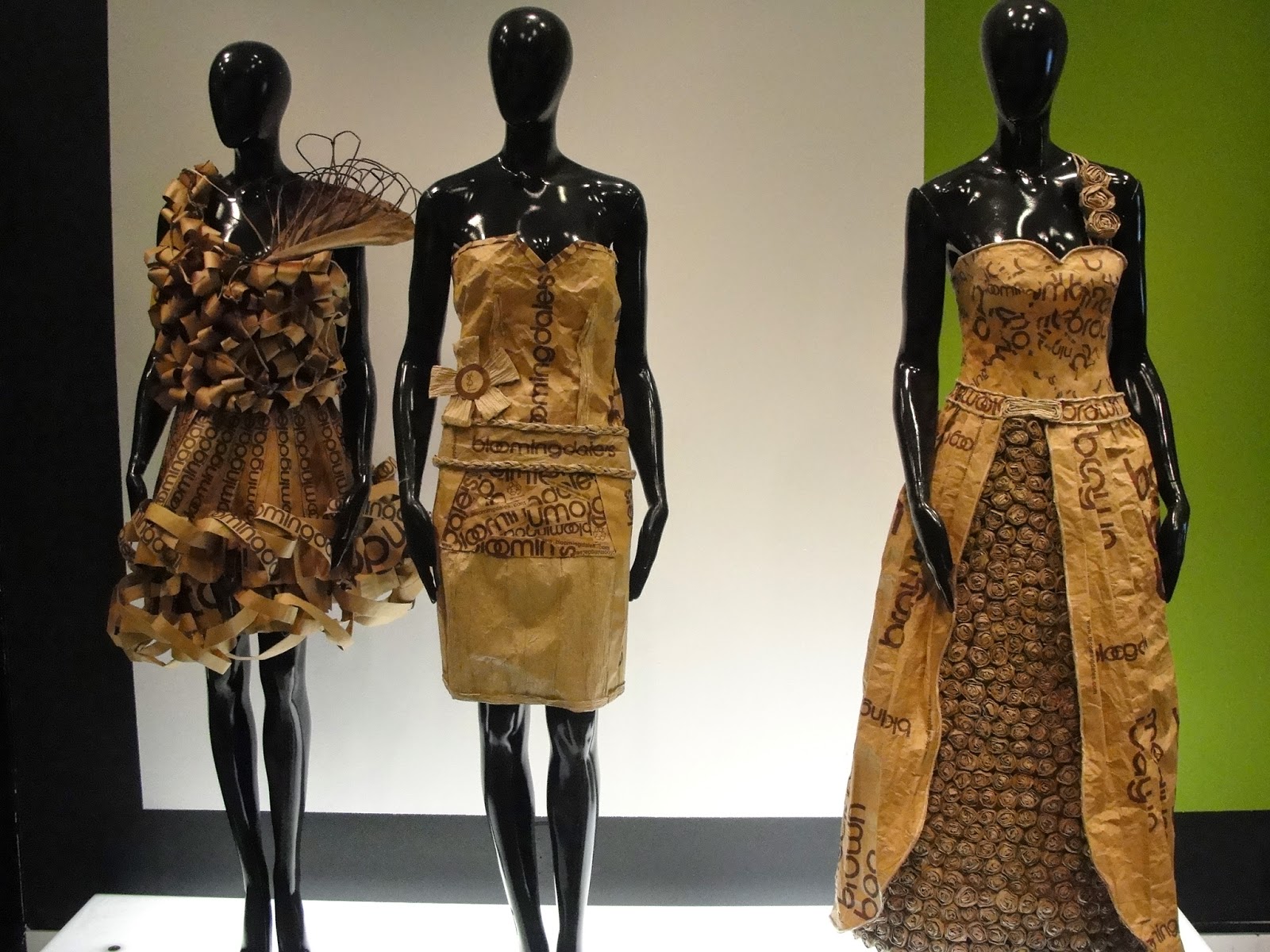 One of two windows. One for the designer Celine...... 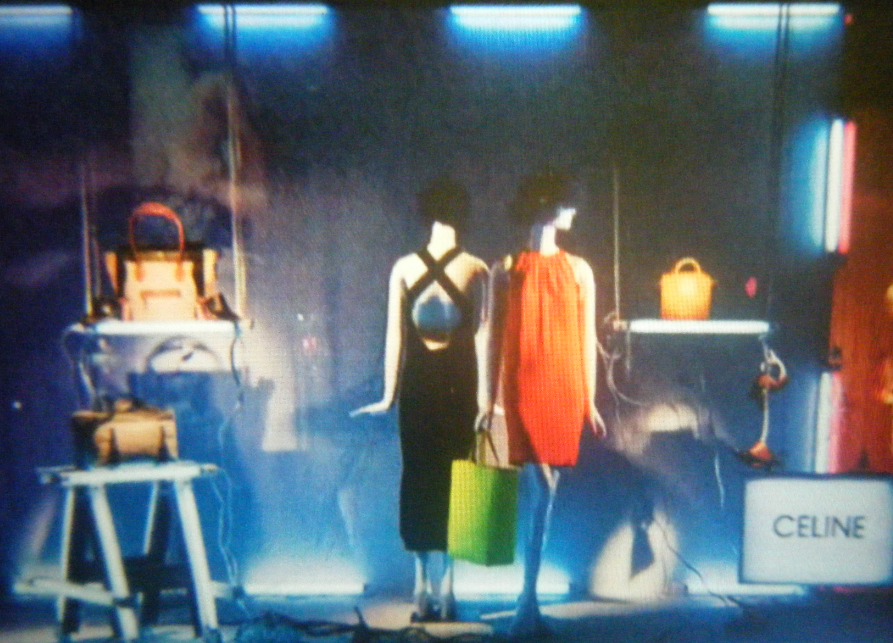 And this one for a black and white trend statement. This is an example of a idea I get, but then a real pain to execute, but the optical illusion turned out pretty well. The back wall was taped out and painted. And then taped out again to do the black zig zag. The figure cut outs were from a past event, which I re-used and treated with wall paper of different black and white patterns. Our mannequins were added in last. 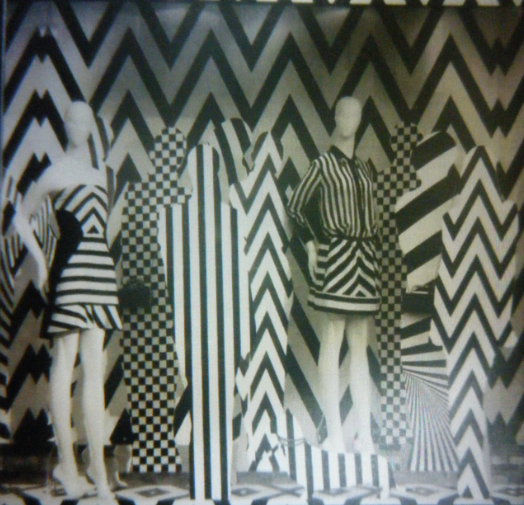 Here is a men's wall I did to showcase men's accessories in blue for the season. The white lines are actually PVC plastic piping, with a disassembled bike for the parts!!!!!! 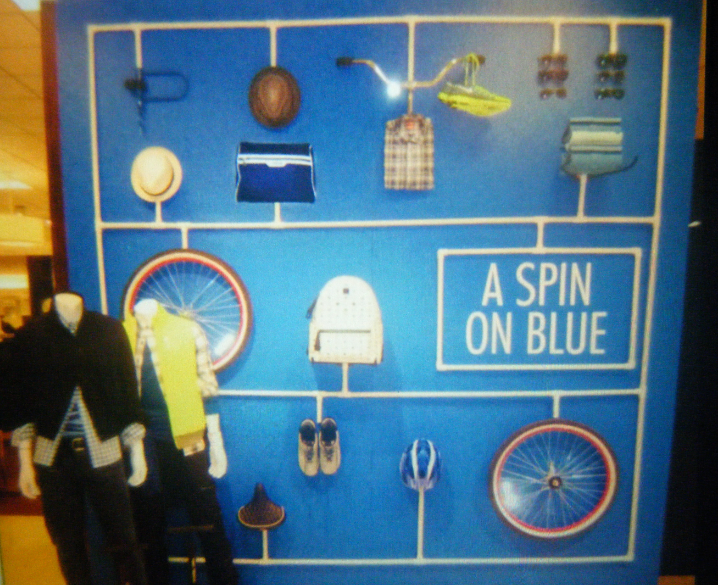 And this is the same concept, but for women's accessories. The store engineer gave me an odd look when I asked if he could saw this bike in half!!!! The back half is hanging on the wall, and the other half is coming out of the bottom of the wall. All our stores will incorporate this.

the Robert Graham Shop. We also came up with this concept as well. 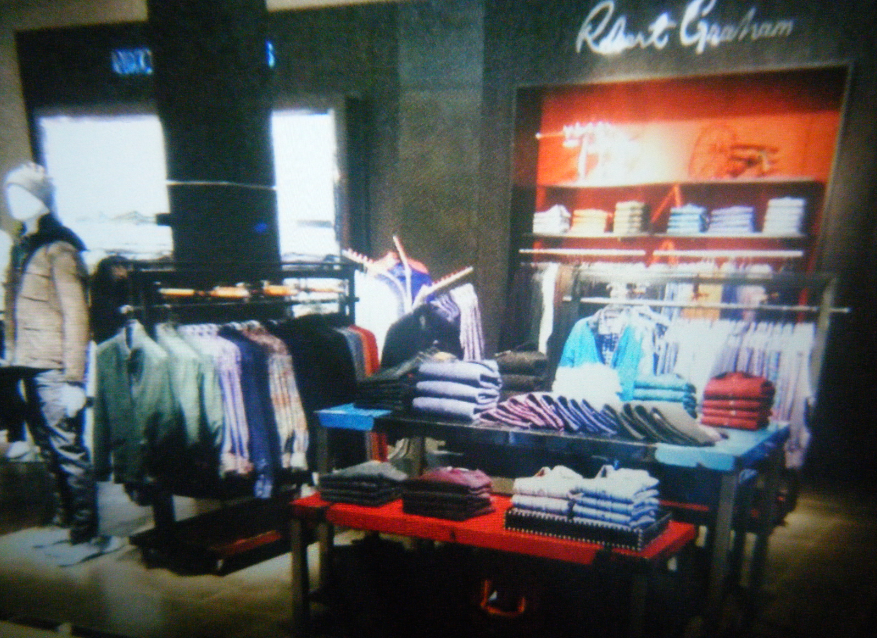 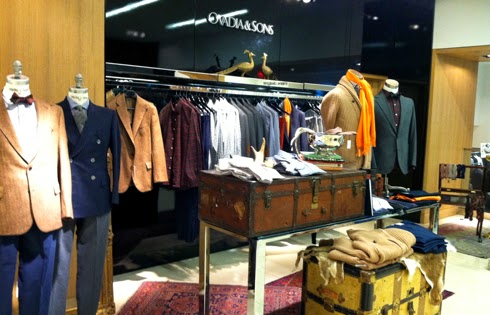 NYC-based Ovadia & Sons are purveyors of some of the most beautifully-tailored men's clothing on the market, and this branch was first to get it in, and we were wise enough to show them some love. Shimon and Ariel Ovadia's knockout spring lineup of linen pieces, cotton trousers, light weight knits, crisply cut shirting and suiting is displayed in a beautiful shop that went live last week. And as a bonus, they'll be hosting a Fashion's Night Out event in the store for all you dudes to get a little liquored up and loosen up the ol' purse strings. 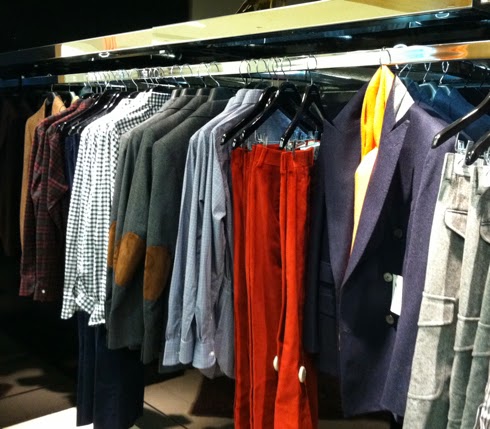 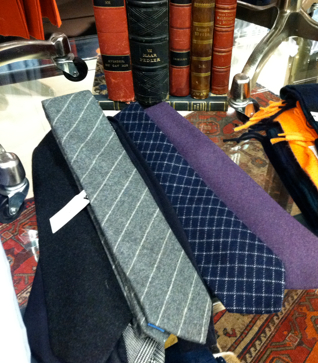 The treatment for the shop, Equipment, turned out beautifully....... My Rag & Bone shop. I really like how the merchandising of the goods turned out.... and my empty hootch bottles even added to the look.... The all new sparkling handbag department with the new Chanel Handbag boutique at the major sightline.... Added these mannequins, re-painted in all black, to add some animation to the Bobbi Brown counter. 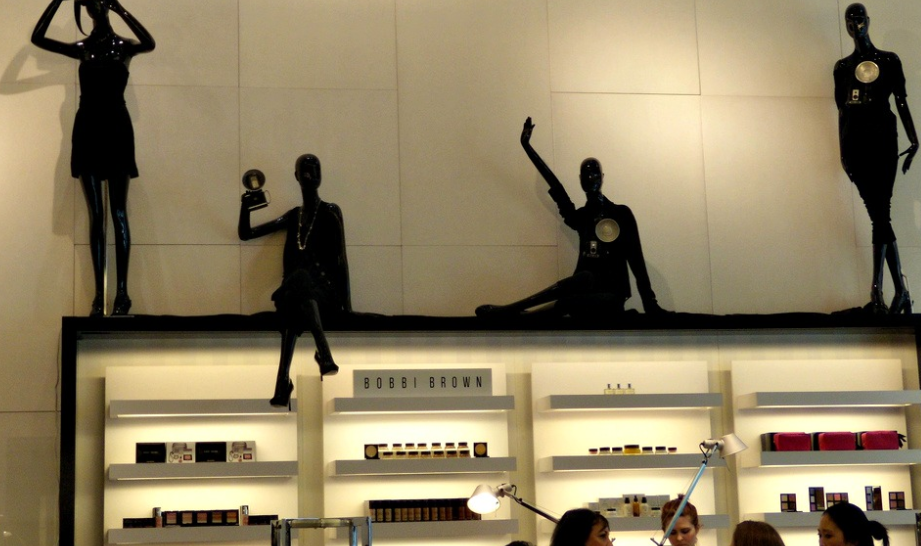 This was the men's swim trend Shop we came up with. The table and back boards are all from ply boards for a light, beach feel. Followed by beach graphics we printed off the web. 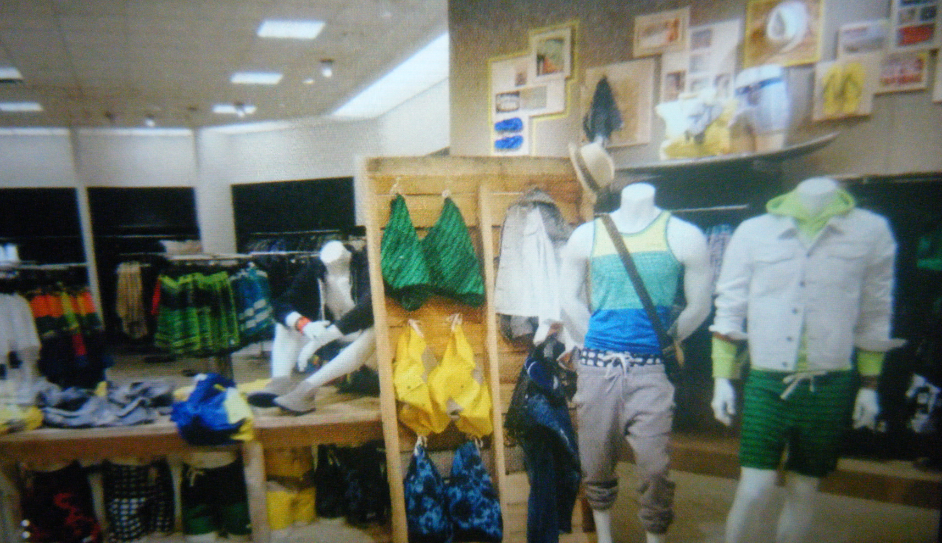 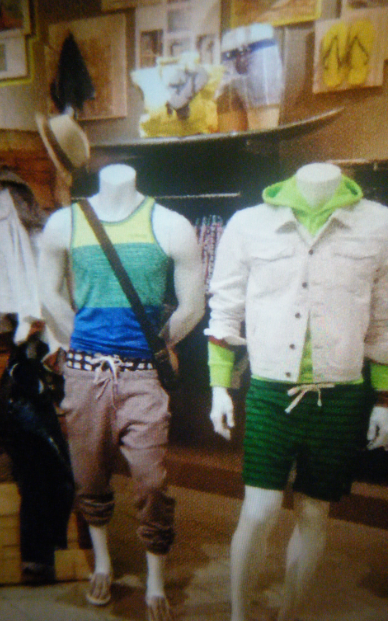 The one nice treat at this store is, they have a sinful chocolatier, Martine's, on the ground level, perfect for the mid day pick me up! Unfortunately my waist line disagreed.. 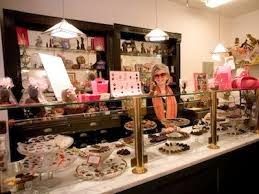 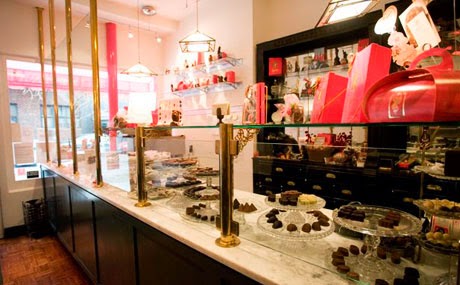 And luckily when I did get exhausted, all I had to do was head to the luxury bedding department for a nice spell and catch a few winks...... 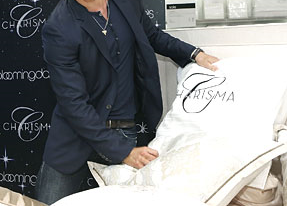 contrary to popular belief I did work. 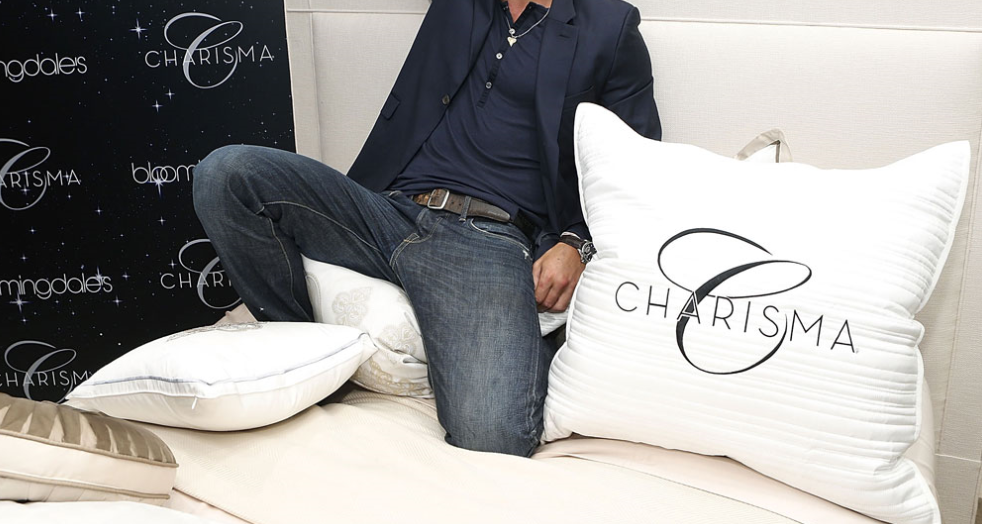 And thank God, like in the movie mannequin, I didn't wake up naked on display. That could have been a tad bit embarrassing. Tootles!
Posted by Mistress Maddie