MISTRESS Q&A- THE WORK AND LIFE IN HIGH HEELS 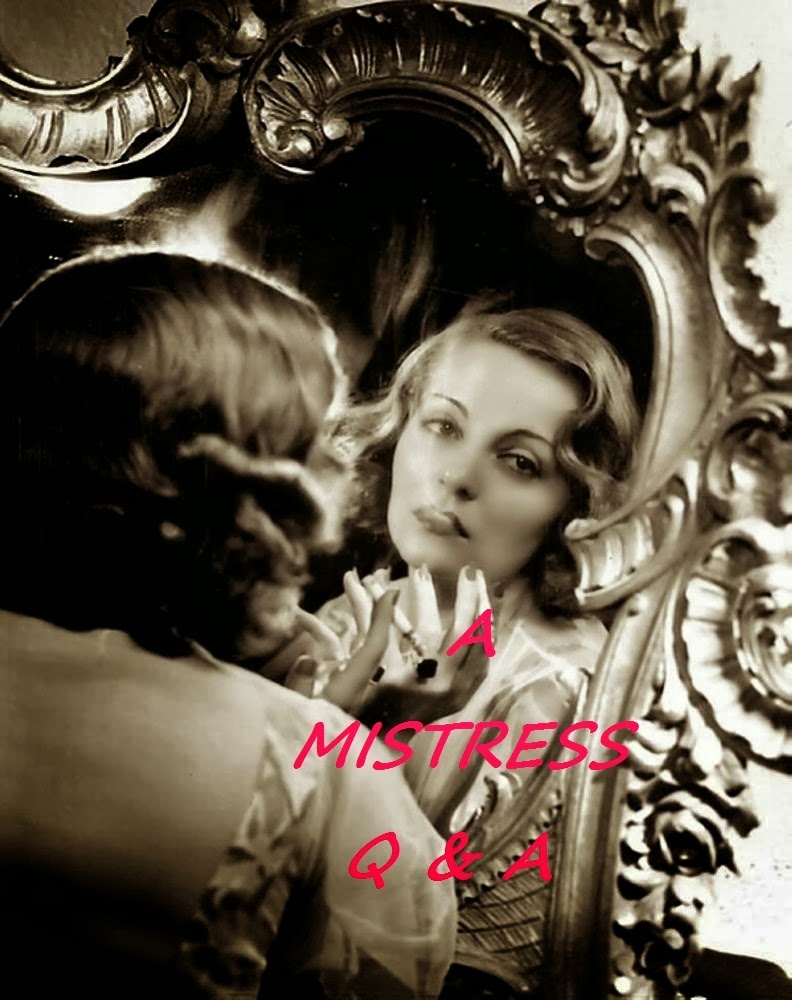 Oh well, here we are on the last leg of this Q&A!!!! It's been more nuts than watching a split premier of RuPaul's Drag Race!!!! THANK YOU everybody for your questions, it's been real fun answering them for you, and it was pretty interesting seeing what you all were wondering!!! Maybe down the road we can do it again. On this final post I will answer the work and drag questions.....
WORK
Madame Redfern-
This will be fun. First how did you get into visual styling? Well, that could be a long story.  My degree and background is actually in interior design. Upon graduating I had worked for two years for a design firm when I lived in Harrisburg. After the two years,  the firm went under and I was out of a job. Till I could get back in it, I took a job as a visual merchandiser for Pier I Imports, where they thought I could also assist customers with interior selections. Well I loved it and stayed with them for 8 years. I decided I liked making things pretty, so I wanted to get into visual styling at a department store. I worked for two local department stores before moving to the Philadelphia area where I went into a visual regional position with another company. But after 7 years with them the travel getting to much, I left them to my current job, probably my favorite of all my jobs, with a major upscale iconic department store. I do keep my hand in interior design by free lancing and have also been involved with three design show houses.
Miriam Webster-
Now I know you do some king of work in fashion, but what do you do exactly, and have you always did that for a living?  For the second half see above. Currently I do visual styling for a huge iconic department store. On a given day, I dress windows, major mannequin moments showcasing trends through out the store, production work and wall treatments for individual designer shops and entrance walls, floral arrangements, oversee the mechanising team with standards and fixture placement, coordinate fashion shows for in store events, and have also helped with personal shopping with our Head Personal Shopper. There is also once a season trips to showrooms to view the upcoming trends. Plus LOTS of little things. My highlight with this company was meeting Rachel Zoe and Jeremiah Brent. I have some pictures of my work from a week ago coming up soon.
DRAG
Anne Marie- Oh look, it Anne Marie again!!!!!!!!
what was the best thing about dressing in drag? the worst? Well, the best thing would have to be the money you can raise for a good worth while charity, and the excitement you can give people from watching a show. The transformation to this day still amazes me. The worst thing? SHAVING! When I did/do drag, I shave my arms and legs completely, and I hate too since I and my beaus like my hairy legs.

If RuPaul tried to recruit you for Drag Race, would you do it? If it was years ago, I would have in a heart beat!!!! But if it came out of the blue now, I would really have to brush up on some of my skills since I have retired from drag except for an occasional show. Plus I can't sew. When I did shows and went to parties, I have a lady I use to work with that makes everything to my specifications. But hair and make up, no problem. When I was involved in  drag,  I was a personality queen at clubs and parties, and was never into the pageantry stuff, so I don't know if I would like a competition setting.
Carmen Dioxide-
I would love to know how you started doing drag, how did you get the name, and are you still active in drag? Well, like most queens it started with Halloween. Then after a scorned relationship I was over men and wanted nothing to do with them. Did I just say that???? anyway, since most guys were turned off by drag, I started to dress in drag more and more to keep men at bay! Problem was the drag got better and it got to the point where everybody wanted Maddie at the clubs and at private parties. The name was originally Madeline Borghese. Then Maddie. In or out of drag, if you, to this day, call me by my real name I won't even hear it. Say Maddie, and I hear that!!!! People often ask if it's short for Matthew. Mistress came along with bigger cities. I once saw two married men, unbeknownst to me, so Mistress was coined. Borghese from the cosmetics I used. Mistress Borghese was bore and stayed ever since. Maddie to close friends. After 15 years I decided to hang up the pumps as I begin working out, getting more muscular, and wanted to do other things, plus the time one needs for drag wasn't there,  and it was time to pass the torch. I still do maybe one or two shows a year for a worth while cause.
Clara Voyance-
what your favorite drag number?,  My three favorites were, Shirley Bassey's Get the Party Started,  and since I was a high NRG queen, Beyoncé's Green Light and Love on Top. I will say I can DANCE!  Last summer I also had fun with a drag king for a summer show. We did Will I Am's  Scream and Shout. We torn that thing up!!!!
The Midnight Magpie-
Who would you name as the some of the best drag queens? These are the queens I would say, if they are in your neck of the woods....check them out, you WANT BE DISAPPOINTED..... I just love great make up, huge hair, and some camp...not to much fishiness.....
Lady Bunny- MY FAVORITE!!! 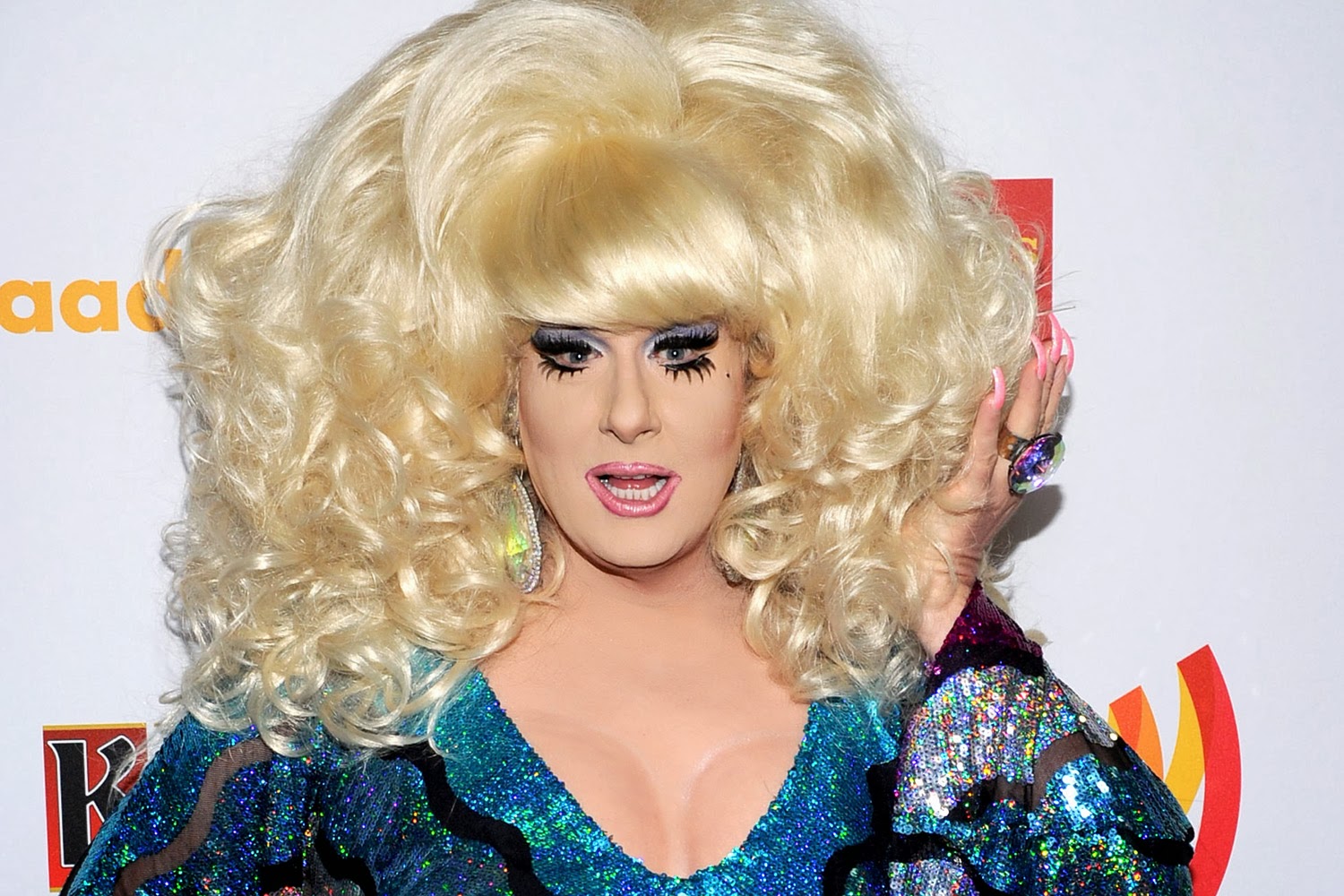 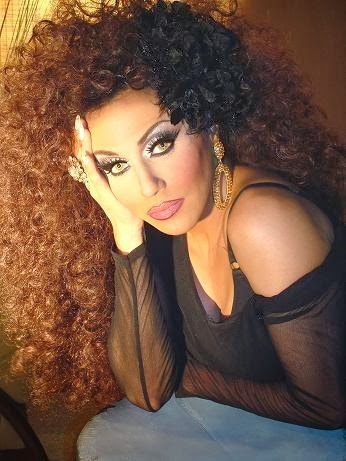 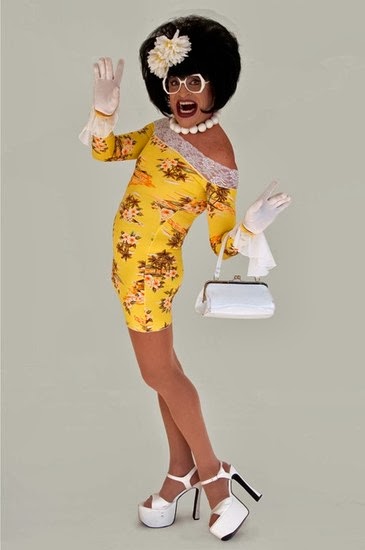 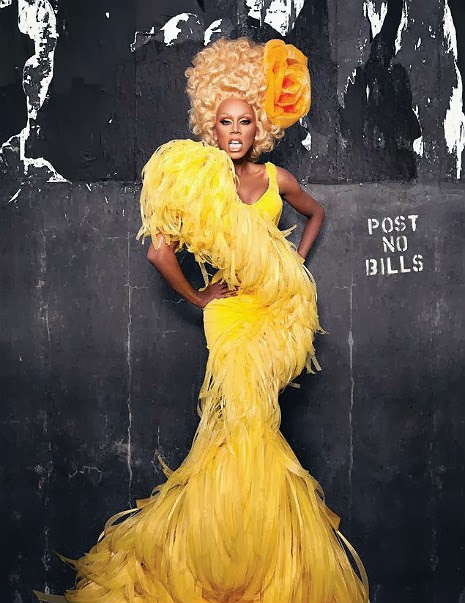 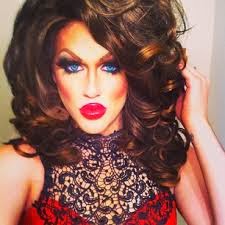 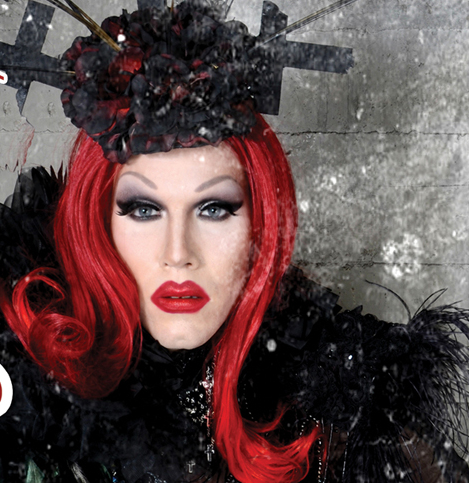 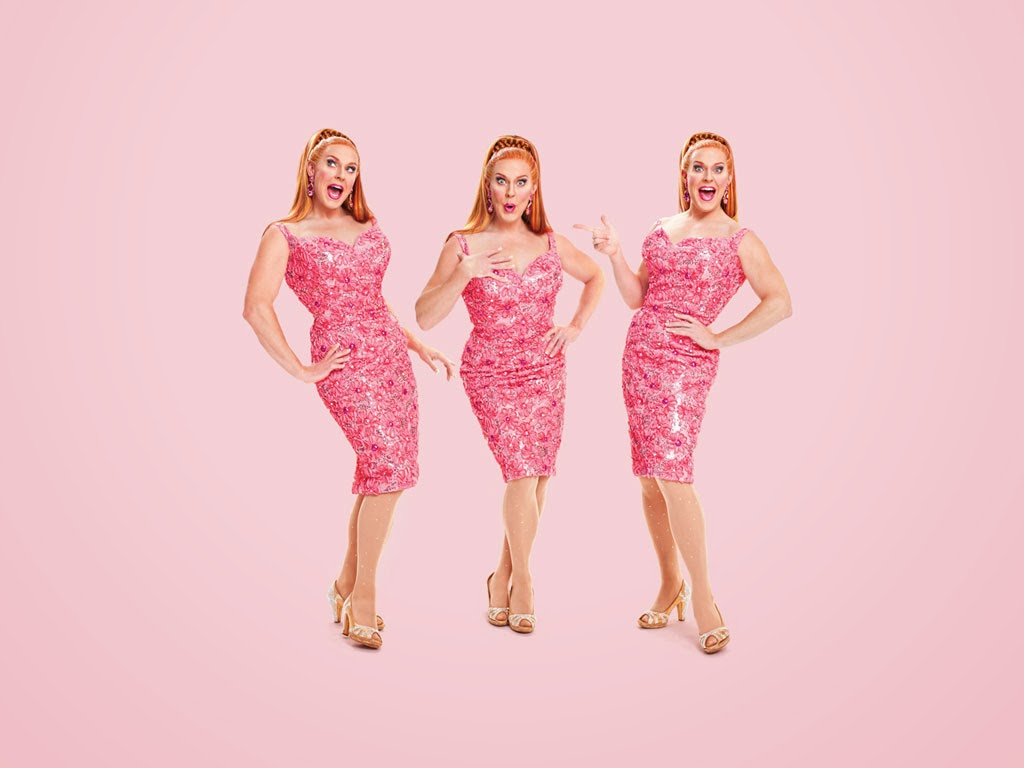 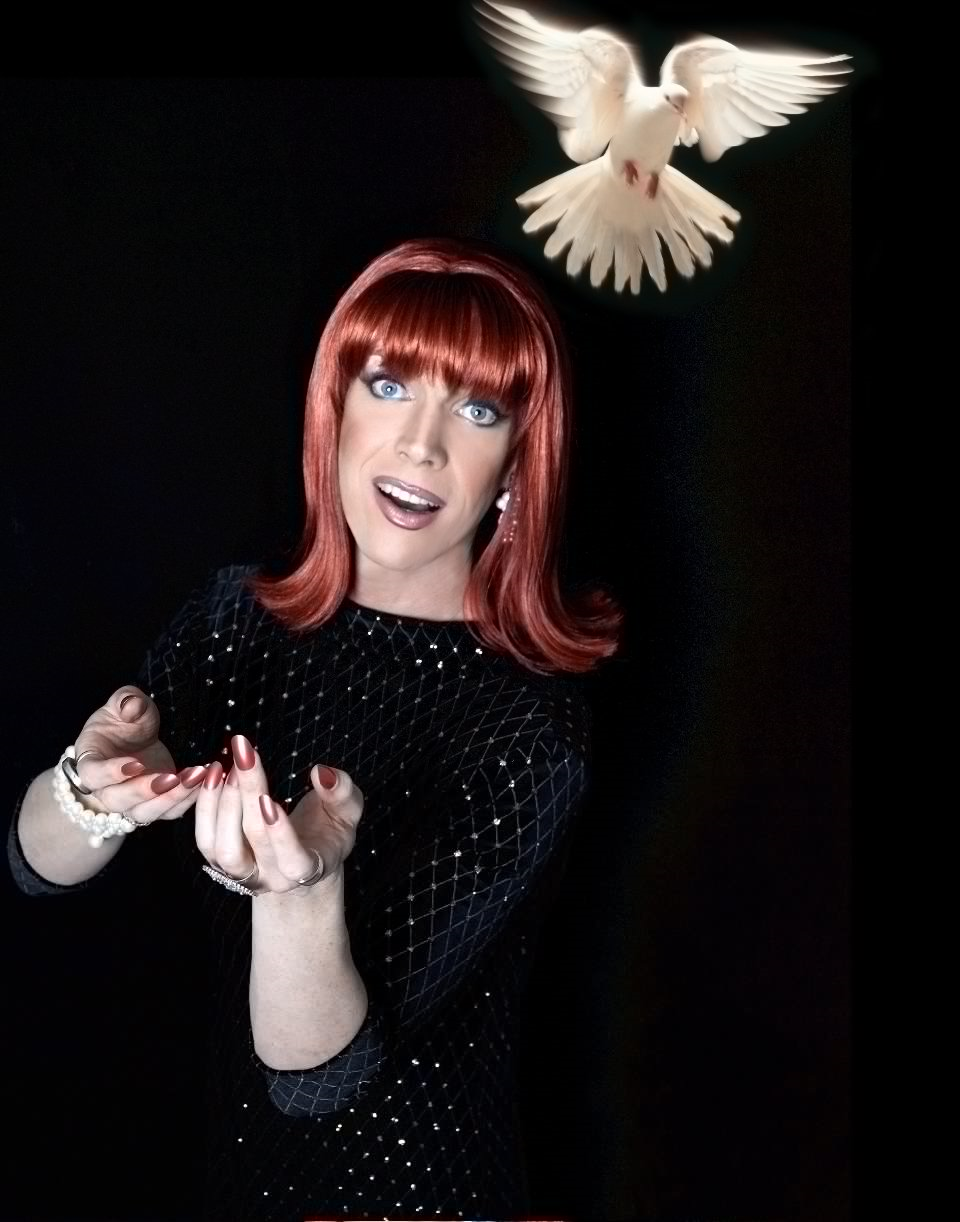 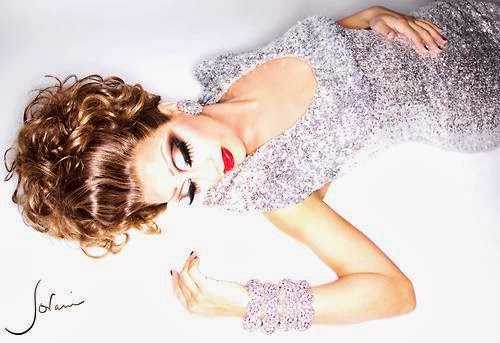 And as a special treat here are some pictures that the Professor took from the Mardi Gras show last week with yours truly and Thunder Showers.........
Miss Martini, Mistress M, Summer Clearance, Thunder Showers 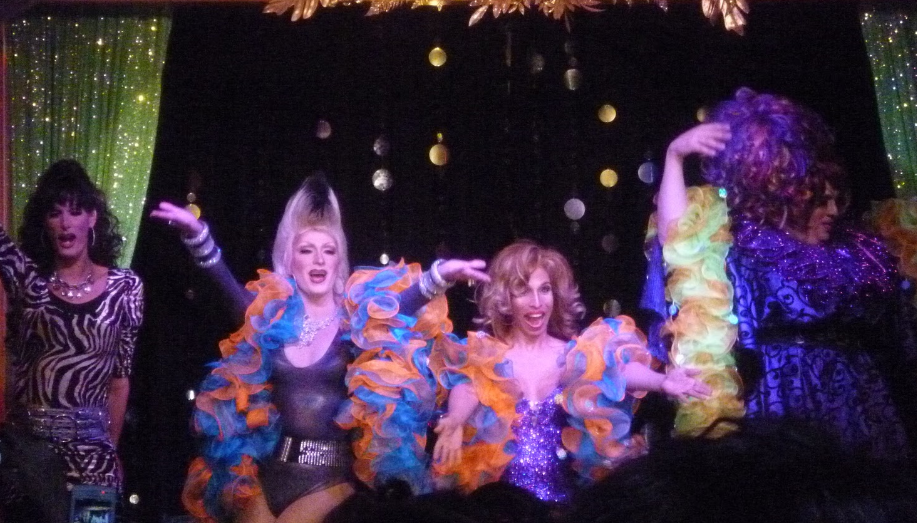 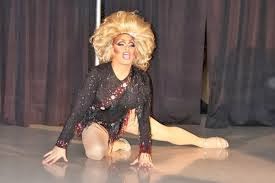 The New Hope local girls with a photo opt with us show girls..... I look so thrilled don't I? 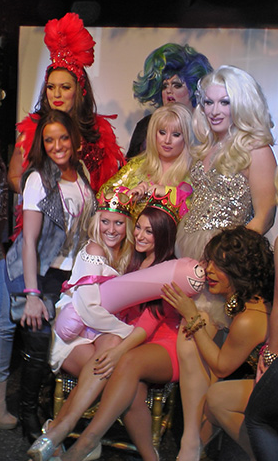 And that is a wrap on the Mistress Q&A!!!!! Thanks for all your questions, it's been real fun playing. Maybe I'll give you the chance to probe me again sometime!!!!!!!!!
Posted by Mistress Maddie

Email ThisBlogThis!Share to TwitterShare to FacebookShare to Pinterest
Labels: the Mistress