So....This Makes Me a European Mutt 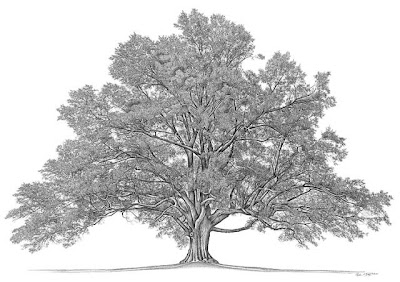 Over the holidays when I was home I had a wonderful visit, and one of the best gifts from the Mother. My family history book, The Family Chronicle, which my departed father worked on for seven years, and completed a year before his death. He, and my late cousin told me much of what was in the book over the years , but the later family history. On my dad's side still living, is my half brother and sister and their kids, but the rest of his family is passed away. I never knew my grandparents on my Dad's side as they were both passed away before my hatching! 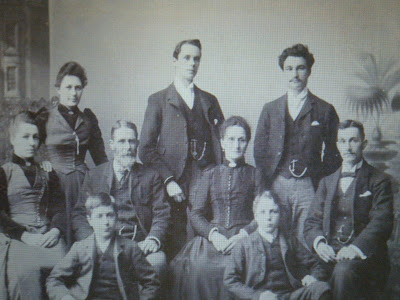 I have no idea who the people in the picture are except that the original picture was dated 1885. My father had many pictures passed down and had the pictures reproduced for all us kids. I think they may be on my dad's father's side, but not sure. Neat photo though. I have been reading his work alot this week, one reason I haven't been blogging much. Some of the things I found out from the book-

* my dad's grandparents on his dad's side were born in Amsterdam and Holland, and came over to the states at early ages. No wonder I love sex so much! Up to that point the grandfather was from a small neighboring town to Amsterdam by our families last name, and his grandmother from Amsterdam. At least three members of the family on his grandfathers side were in the inner sanctum as advisers of Queen Wilhelmina of the Kingdom of the Netherlands, and some of our family history was actually in her library. Makes me wonder if it is still there. Is it any wonder I love queens?

* my Dad's family on his mother's side was from England and Ireland. That side of the family on his great grandfathers side ended up in the states when they were given land by King George V in upstate New York, and lots of it apparently. It was in Rockland county. The family all lived in a huge house together for years. From what I read, the area is all built up now and where the house stood is now right next to a major highway, and the orginal house was wrote about in a book about Dutch houses that my mother still has.

* my dad's uncle owned his own Wall Street Brokerage firm and retained his wealth even during the Great Depression. That was how my father ended up in Carlisle, PA and met his first wife, to run a branch of the firm for his uncle. His cousin, William, the one I mentioned above, also worked there. William was a blast and funny as hell. He had a Rodney Dangerfield personality. When I was young I spent many a summer with him and his wife. He also had a sister he never talked about. All I knew was she was a artist and her name was Marie Stobbe. My parents have several of her paintings. Well, the in the book, she was married briefly to Albert Stobbe , a businessman, and was once Vice-President of RCA Records!!!!!! But they divorced quick. William, always claimed she had a female lover!!!! I'm shocked! But William's wife, who I still talk to, said Marie died in 2005 at 95!!! And she was still painting, and still ran her art gallery in Glen Cove. 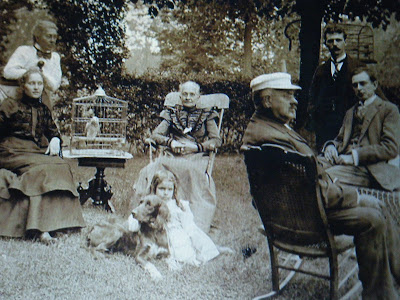 This picture I believe was my father's grandparents or the great ones, not sure, at the homestead on his mother's side. I saw the name Lucretia Swartwout on the back, but the names were hard to read. Another neat picture. Lucretia was my great and grandmother's names, and is also my half sister's name. So I'm thinking these family members are from the Swartwout side. How neat with the birdcages.

* I also found out many members of the family loved art, animals and music. This answers alot. 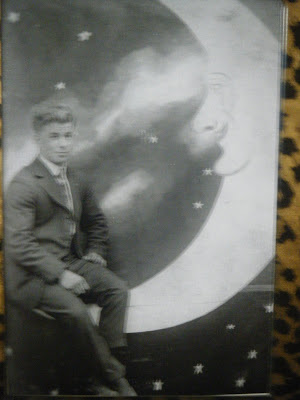 Handsome devil. I do remember him, even though it is limited. He died when I was almost 6, so my grandmother was the only grandparent I ever really knew for years. She also told me that my great, great grandmother on my grandfathers side, was a cousin to Aaron Burr, yes, that Aaron Burr, remembered as the man who killed his rival, Alexander Hamilton in the famous duel. How cool is that! No wonder my grandfathers side had hot tempers!!! She also told me that my grandparents corresponded in the mail for a year before they ever met. Met once. And then married!!!! Who knew? My aunt is a wealth of family information, but now we must get it organized and written in books with all the news clippings she has, and all the neat pictures! So pretty neat, and wanted to share. So I guess that's makes me a European mutt, with Dutch, Irish, Czech, and Swiss!!!!! Thanks for reading, it's not often I share some background on the mysterious Mistress, but I found... and am finding it all, so fascinating! Makes me wonder if I go on ancestry.com if I will find the same results? Hmmmmmmmmmmm. Have any of you tired that site? And anything intresting that shocked you about your family histories?
Posted by Mistress Maddie

Email ThisBlogThis!Share to TwitterShare to FacebookShare to Pinterest
Labels: family, the Mistress