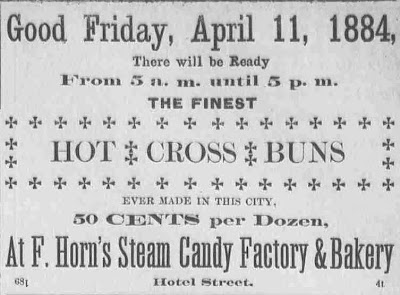 Well it appears we went from the sweet candy of yesterday to these gems. Hot Cross Buns! To me, Hot Cross Buns are as synonymous with Good Friday as scrambling around town to buy Easter Egg dye and synthetic green grass for my cousins Easter baskets. There’s so much legend and lore behind Hot Cross Buns, which date back to the old country.  Are you familiar with these? 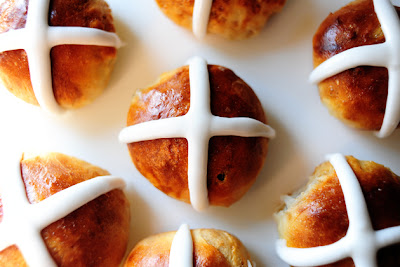 A Hot Cross Bun is a spiced sweet bun made with currants or raisins and marked with a cross on the top, traditionally eaten on Good Friday. But I enjoy them for breakfast till Easter. In many historically Christian countries, buns are traditionally eaten hot or toasted during Lent, beginning with the evening of Mardi Gras ,the evening before Ash Wednesday, through Good Friday, with the cross standing as a symbol of the Crucifixion. They are believed by some to pre-date Christianity, although the first recorded use of the term "hot cross bun" was not until 1733.
It is believed that buns marked with a cross were eaten by Saxons in honor of the goddess Eostre (the cross is thought to have symbolised the four quarters of the moon) "Eostre" is probably the origin of the name "Easter". 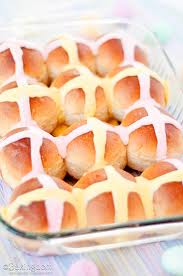 English folklore includes many superstitions surrounding hot cross buns. One of them says that buns baked and served on Good Friday will not spoil or mold during the subsequent year. Another encourages keeping such a bun for medicinal purposes. A piece of it given to someone who is ill is said to help them recover. Sharing a hot cross bun with another is supposed to ensure friendship throughout the coming year, particularly if "Half for you and half for me, Between us two shall goodwill be" is said at the time. Because there is a cross on the buns, some say they should be kissed before being eaten. If taken on a sea voyage, hot cross buns are said to protect against shipwreck. If hung in the kitchen, they are said to protect against fires and ensure that all breads turn out perfectly. The hanging bun is replaced each year. Well I don't think I'll be hanging one in the kitchen, but I do love them.  I’m not sure if that’s due to their inherent powers of the buns…or just all the delish carbohydrate goodness. The line is kind of blurry. Either way, Hot Cross Buns are a fun, meaningful Easter tradition, with my family as my grandmother used to make them, and now my aunt does. I have not mastered the rise  yet. I know your all shocked by that!!! I just order mine. 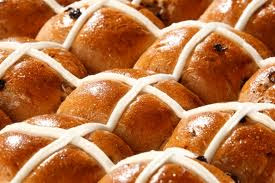 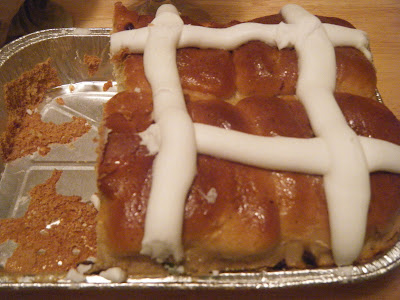 huh, why yes...there does seem to be two missing already! why it must have been the houseboys. And if you do enjoy some Hot Cross Buns this season**  be sure to kiss them before eating. I always do. Tootles!
Posted by Mistress Maddie