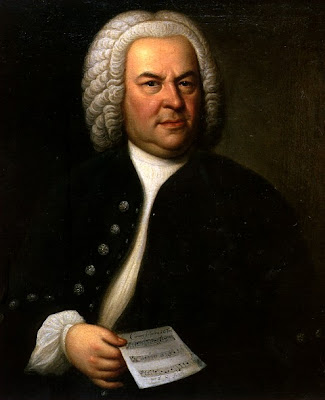 Today is  Johann Sebastian Bach's Birthday and he would have been a mere 328 years old. I just love classical music and will generally listen to it on my way home for relaxation, and then with some wine upon getting home, and Saturdays are the best with breakfast and coffee. So today was a treat as all the public radio was playing was Bach. But did you know some of these interesting facts........


Bach fathered 20 children: only nine of them survived him.
Sons of Bach: Several Bach sons became professional musicians and composers. The most famous were Carl Philipp Emmanuel Bach and Johann Christian Bach.
Orphan: Bach was orphaned at age 10 and was raised by an uncle.
Germany only: Although he traveled frequently, Bach never ventured beyond a 150-mile radius of his birthplace, and never left Germany.
Technical expert: Bach was often invited to inspect the mechanics of church organs.
Duel: In his early 20s, Bach pulled a sword on a bassoonist who had accused him of slander.
Jail: Bach spent about a month in jail after showing disrespect to the Duke of Weimar by illegally seeking employment elsewhere.
Third choice: Bach was hired at Leipzig only after Georg Friedrich Telemann and another (now practically forgotten) composer refused the post.
Old-fashioned: By the time of his death, Bach’s fugues and contrapuntal style were out-of-date with the newer, lighter style; his sons referred to him as “old powdered wig.”
In his own words: “The aim and final end of all music should be none other than the glory of God and the refreshment of the soul. If heed is not paid to this, it is not true music but a diabolical bawling and twanging.”
and now for one of my favorite pieces......