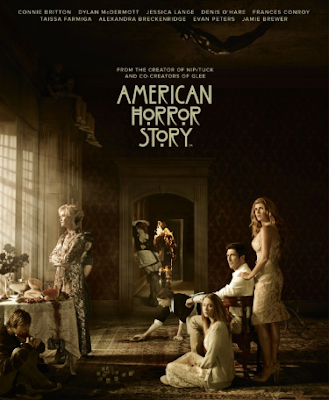 I do believe my void, mourning and heartbreak from the cancellation of Ugly Betty has finally left me and I can now switch to wearing purple! My never to miss new show and new guilty pleasure is the arty American Horror Story, which spikes fright formula with kinky sex. The bloody new soap opera American Horror Story respects its genre roots, hitting viewers with a full complement of creaky doors, squeaking stairs and whistling wind. A creepy prologue set in 1978, when dorky red-haired twins get attacked in a dark basement by a bald dwarf, the series zeroes in on the misadventures of an unhappy family that tries for a fresh start by moving into a haunted house............


then things get weird. The series centers on the Harmon family: Ben, Vivien and their daughter Violet, who move from Boston to Los Angeles after Vivien has a miscarriage and Ben has an affair. They move into a restored mansion, unaware that the home is haunted by its former inhabitants, all of whom have been murdered in the house. And the series couldn't be better cast, one of the best castings for a show in a long while. 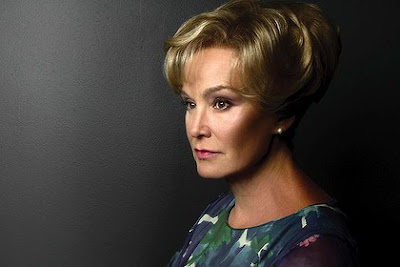 From Jessica Lange as Constance Langdon, the kleptomaniac neighbor, who plays the part of the southern Gothic, who seems to have a supernatural connection with the house's mysterious, blood-soaked past, to sexy and hunky Dylan McDermott as Dr. Ben Harmon, to the even part time Christine Estabrook as Marcy, the Harmons' real estate agent, who is bat shit crazy and entertaining to watch. 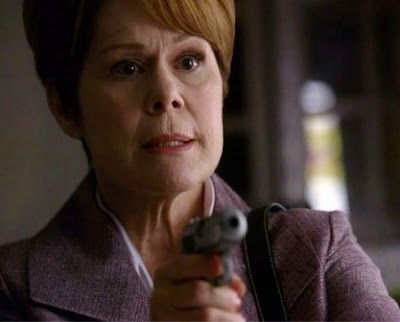 Then there's Moira O'Hara played brilliantly by Frances Conroy and Alexandra Breckenridge, the ancient and seductive housekeeper. And how can one go wrong with the hot hunky dead gay couple always bickering, and one accusing the other of always cheating. 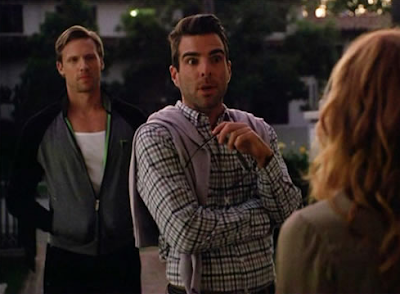 Zachary Quinto as Chad Warwick, owner of the house before the Harmon's and his hot partner Patrick, played by Teddy Sears. And the Mistress won't complain to seeing a very naked Sears run around the house, or grab Dylan McDermott's crotch. And how can you not get the willies by Rubber man. Except when in a struggle with a half naked McDermott? Nope. Not complaining about all the hot naked male flesh!!!! I think it will be interesting to see just how many people died in the house and what will Vivian deliver when the babies come? The story is very well written and continues to unfold, a breath of fresh air in the land of the boring reality shows that just won't go away!
Posted by Mistress Maddie