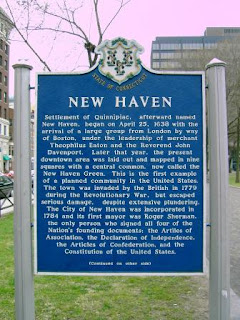 Now just because yesterday's post was filled with men, drinking and keg parties that is not all I did on this trip. I do like to do my cultural thing also! We did all go to one art gallery, but the Lad is not really into the gallery scene as much, but we can forgive him as he is cute! His uncle recommended he take the house tour of New Haven to see all the historic homes, which there are aplenty to be seen and I just love a good house tour. So after getting my flask ready for the day, we set out to see the wonderful abodes there were. 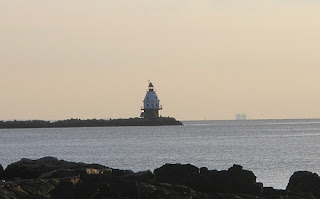 This was the scene on the way into town. It's hard to see the lighthouse but it looked like a real cool shape, very unusual to what like look like most of the time. 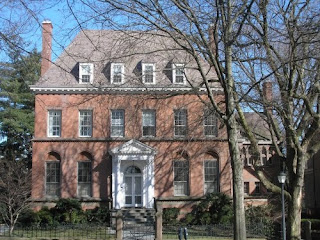 The Henry Farnam House, probably my favorite on the tour is on Hillhouse Avenue, is an 1871 building whose style was completely changed in 1934. The house was originally constructed as an impressive High Victorian Gothic mansion, the first on the street in that style, for Henry Farnam, engineer of the Farmington Canal and a railroad president. Designed by Russell Sturgis, it featured extravagant Gothic details, including turrets, gables and lancet windows. These were all removed and the home converted to a Colonial Revival style after the house became the property of Yale University in 1934. 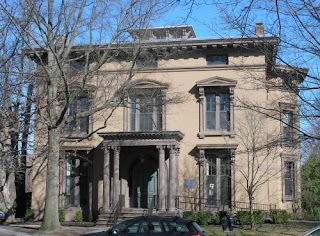 Yale University’s Horcow Hall, on Hillhouse Avenue, was originally built in 1859 as a house for Pelitiah Perit, a merchant. It was the first home on the street to be painted brown. The architect was Sidney Mason Stone, the father of Margaret Sidney, author of the Five Little Peppers series of children’s book. 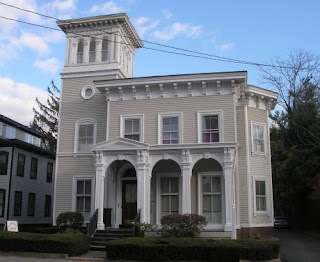 The Timothy Lester House, above, on Orange Street, has been linked to the architect Henry Austin, but the details of its construction are unknown. Built in 1846, it may have been the first, and is certainly one of the earliest, Italian Villas (including a prominent tower) in New Haven. 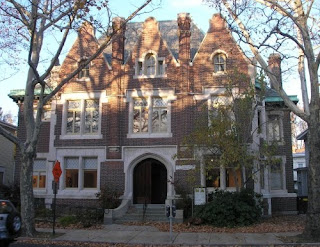 Dr. John Slade Ely was professor of the Theory and Practice of Medicine at Yale Medical School from 1897 until his death in 1906 (when a memorial professorship was established in his honor). Dr. Ely lived in a Tudor-style house, designed by S. G. Taylor, on Trumbull Street in New Haven. When his widow, Grace T. Ely, died in 1960, she left the house as a non-profit arts center. 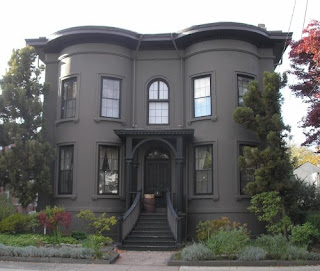 The Italianate-style Nehemiah Sperry House was built in 1857 on Orange Street. It was the home Nehemiah D. Sperry, a businessman and Republican politician. He was a builder and contractor, who joined his brother-in-law, Willis Smith, in the prominent New Haven firm of Smith & Sperry. Much of the Orange Street neighborhood was developed by the company. 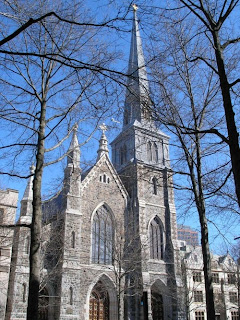 St. Mary’s Church in New Haven was built by the first Catholic parish in the city and the second in Connecticut, founded in 1832 by the Irish Immigrant community. To express their growing influence, the Gothic Revival style church was constructed in 1870 on Hillhouse Avenue, New Haven’s most privileged neighborhood. The spire you see was just added a few years ago. 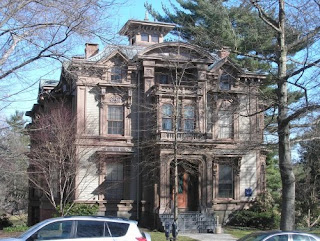 An extravagant Italian villa-style house was constructed in 1862 for John S. Graves, secretary and treasurer of the New Haven Gas Company, on Hillhouse Avenue in New Haven. In 1877, it became the home of James M.B. Dwight. 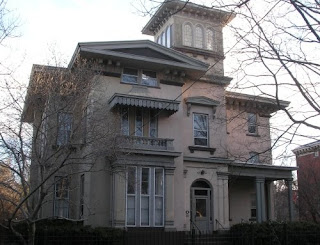 Showing greater freedom than in his earlier design of the 1849 Norton House on Hillhouse Avenue, Henry Austin designed another Italian villa style house on Chapel Street in 1852. Built for the Cincinnati merchant Jonathan King, the house features a prominent central tower. 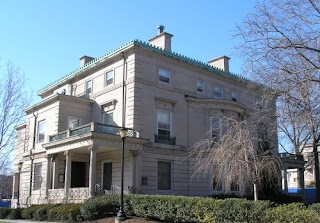 The last private home to be built on Hillhouse Avenue in New Haven was the Henry F. English House. The Classical Revival-style mansion was designed by Bruce Price, architect of Quebec’s Château Frontenac and father of Emily Post.

I have to say I really enjoyed myself on the house tour and this was only one of four tours you could take. I think the reason I enjoyed New Haven so much and found it to be so neat is that the houses were all so different in style from each other and not like a bunch of cookie cutter homes. There also I noticed seemed to be alot a brown painted homes which I like also. Which is your favorite?
Posted by Mistress Maddie