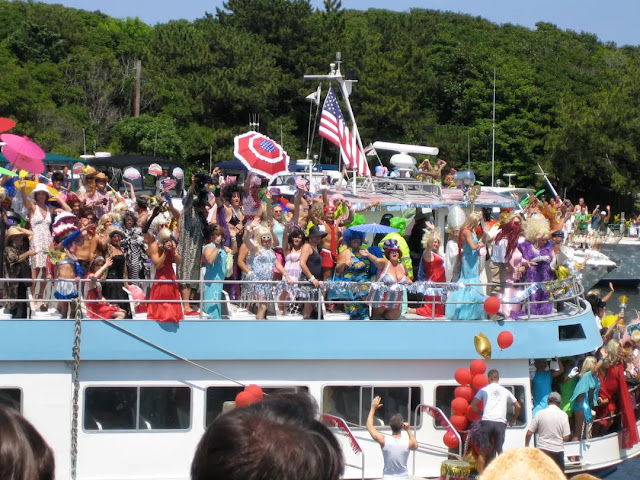 No this is not about my world domination tour...yet, but about a fond memory of my second summer to a lovely little island and a traditional event. Once upon a time, in a gay lively town, Cherry Grove, lived a fairy drag queen. One day she decided to dress in her most queenly robes and visit her stepsisters over in the A- Lister and land of the himbo and beefcakes...the Pines. Upon arrival, her evil stepsisters refused her entry beyond their harbor moat and wouldn't let her in their bars to partake of some libations, exclaiming that her kind was not welcome in their land.  Pissed and sad, the slighted queen returned to her Cherry kingdom to share the news with her artsy and campy friends of the Grove, the Seven Drags.

Enraged by these events, the Queen and the Seven Drags vowed war. After a few nights of altering rest and vodka stingers, they were ready to attack. Armed with the latest royal frocks and shades of eyeshadow, the Queen and her followers descended on the neighboring Pines, prepared to invade the small, minded town and go where they wanted at will. However, surprisingly different from the previous interaction, the Queen and her Drags were welcomed in this new land and accepted as fabulous long-lost sisters. Throughout this feast of drink and mary-ment, the united communities vowed to celebrate this momentous occasion every year on the Fourth of July, a day that all can celebrate not only the birth of their lands but also the decision to rule their neighboring kingdoms with kindness and acceptance. Plus, let's face it, the butch queens didn't want an actual invasion by a ferry of pissed off queens!!! That was what actually happened in 1976...and it continues to this day. Every fourth of July, a ferryboat packed with around 200 drag queens makes the journey from Cherry Grove to the Pines, the two popular LGBT communities on the island. The ladies dressed in all their glory or best sloppy mess, board the boat, and one must be in full drag, and invade the Pines, which is generally packed to the gills with admirers awaiting the show. What follows is a harbor party of the pretty boys, the jocks and gym bunnies, and other shitless morsels, and about 200 drag queens. Each of whom get the spotlight when they each exit the ferry.  Place them all on an island and feed them liquor in the hot July sun and you have yourself the Fire Island Pines Invasion. It's been about 8-9 years since I went to one, my second experience with Fire Island, and it is delicious fun, and one I wish every gay boy and girl could experience. My friend Jamie was there this year, and he said it was a hoot as always. Here are some of my snaps from the year I went. 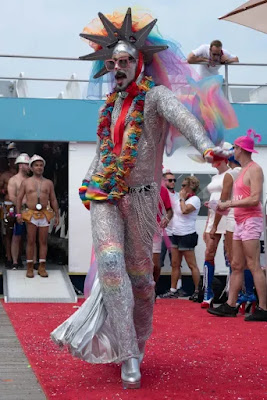 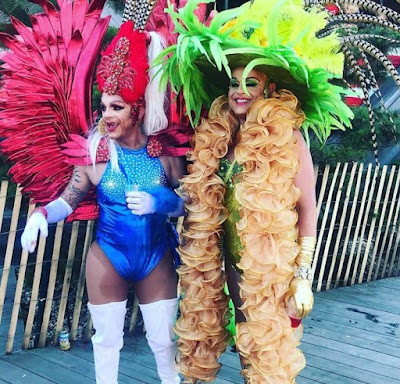 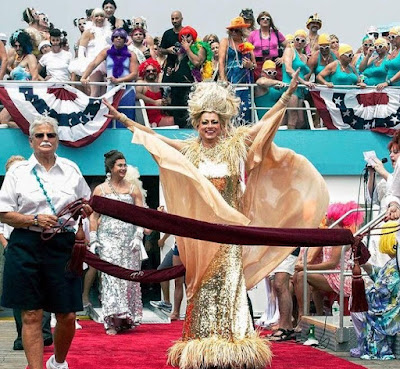 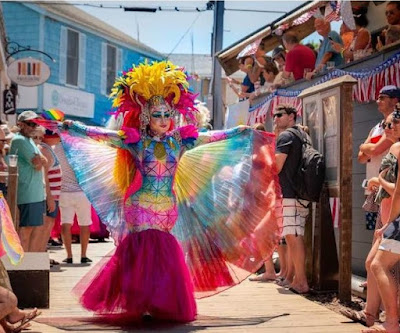 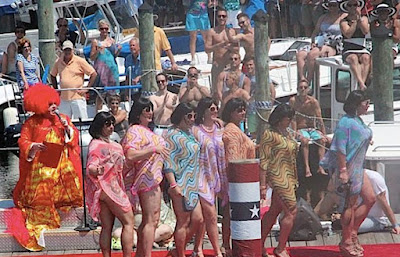 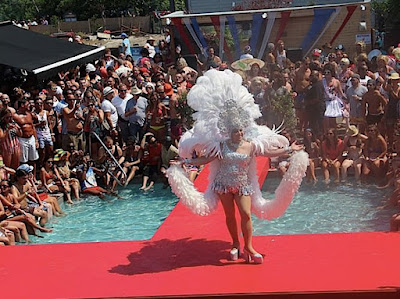 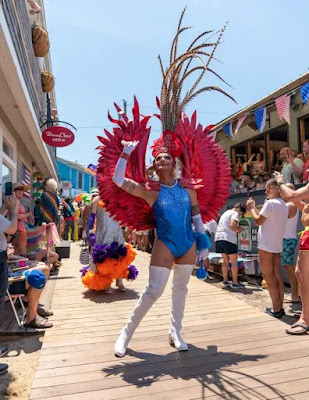 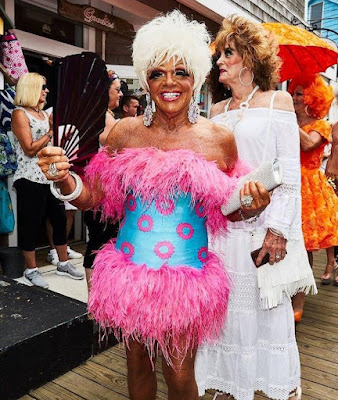 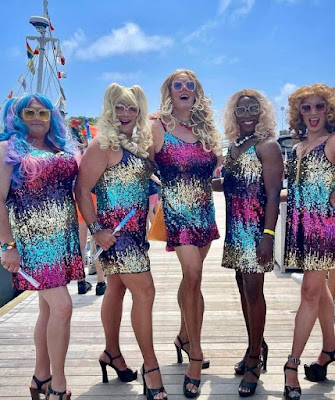 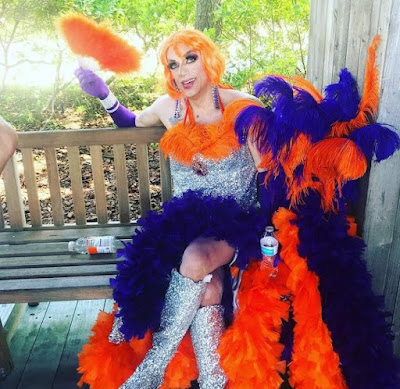 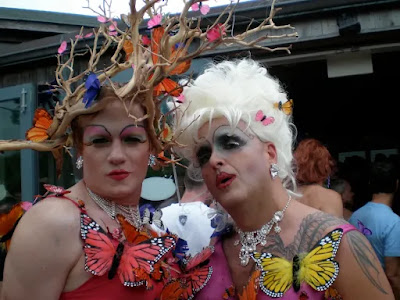 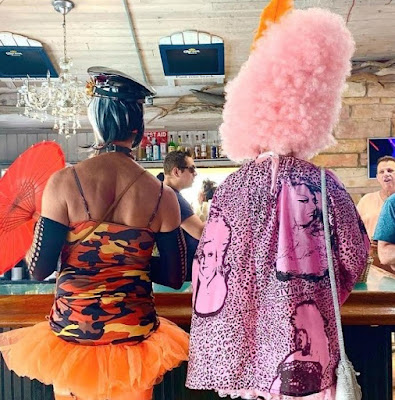 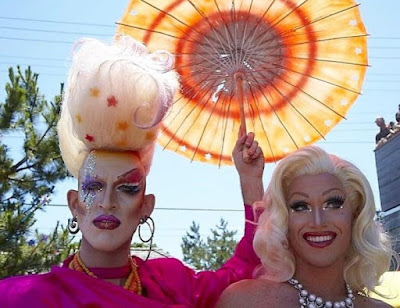 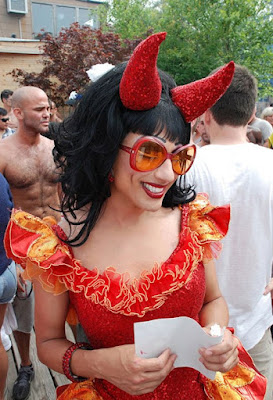 Bianca Del Rio! The horns were fitting for that bitch. 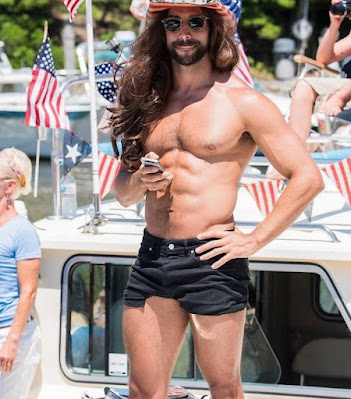 Yes Yes, I realize this is not drag queen. This was a lovely guy I met that summer under the hot sun. I wish I could remember his name...that damn gin. But he had caught your Mistress's attention and we talked at length. I won't divulge if we didn't or did have sex in what I though was the house I was staying in, or that he didn't have underwear on under those denim cut offs, or that he had a hard time peeling my tee shirt off my sweat-soaked body. I'm not one to kiss and tell kids. But that I still have the picture, and tingles, I just had to share the picture.
Now where was I? Oh yes....Now, just maybe if we can get a few hundred thousand drag queens, maybe we can invade DC and show them how to get things done?!?!?! Can you imagine a few hundred thousand angry queens on your doorstep?
Posted by Mistress Maddie