DRAG KINGS OF THE CASTLE

Drag Queens have  become a popular fixture in the entertainment industry over the years, but their trousered counterparts – Drag Kings – are less widely known of. In fact, women have been dressing as men and ‘performing masculinity’ on stage for centuries, from regency actresses in breeches to music hall stars in top hats and tails. Here is a rundown of the long history of the drag king. 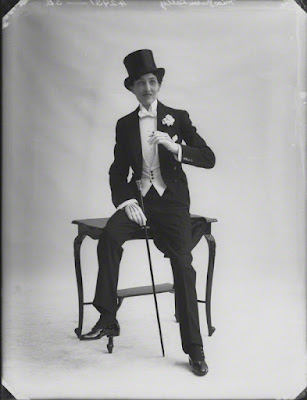 Throughout history, women have generally been prevented from acting in public, from as far back as ancient Greece. Instead, women’s parts were played by male actors in drag, which probably started the whole drag thing, and well into the Shakespearean era. The first woman to tread the English boards was in 1629, as part of a visiting French company – she was booed off the stage.

Vaudeville consisted of variety acts including comedy sketches and sing-alongs to popular songs. Both male and female impersonators were sought after acts. 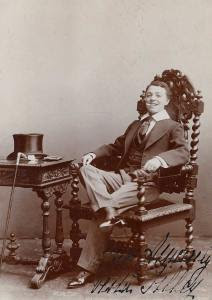 Vesta Tilly was the most successful male impersonator of her day, touring both Britain and America for more than three decades. A child star, Tilly first appeared on stage when she was three years old, with her father who was a comedy actor. At six, she appeared dressed as a boy for the first time, singing opera. After this, she preferred to perform in exclusively male clothes.
Tilly was largely a comedic actress, most famously in the part of the London ‘swell’ Burlington Bertie, strutting across the stage in a tuxedo and flirting with the girls in the audience. Her songs such as ‘Following in Father’s Footsteps’, ‘The girls I’ve left behind me’ and ‘Naughty Boy’, portrayed a rakish young ‘man about town’, though she also performed more sentimental love songs directed at women. 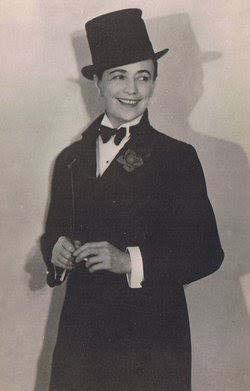 Another popular entertainer was Ella Shields, an American woman from Baltimore who became famous in the London Halls for her parody of Vesta Tilly’s ‘Burlington Bertie’. Shields’ version was ‘Burlington Bertie from Bow’ – a young man who dressed the part of an aristocrat without the money to match.Shields toured the world as a male impersonator, and was known as ‘Bertie’ rather than Ella almost everywhere she went. 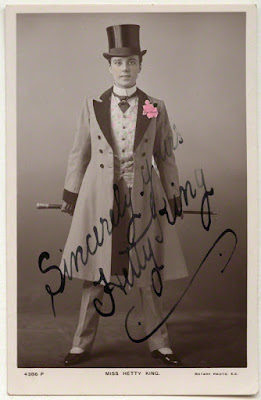 During the heyday of Music Hall (from the mid-1800s to the 1920s) it was also common for male impersonation acts to play soldier boys – adopting the uniforms of the British army in the Boer and First World wars. Hetty King popularized a number of songs from the trenches of World War One in her 1916 act ‘Songs the Soldiers Sing’.
The first male impersonator to become famous in America was an English performer, Annie Hindle, who immigrated to New York City in 1868. Hindle toured the country and was extremely successful, earning rave reviews wherever she went. 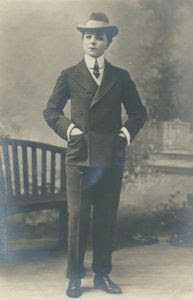 While Vesta Tilly, Ella Shields and Hetty King all generally dressed in women’s clothes in their private lives and all married men, Annie Hindle’s career came to an abrupt end in 1886 when she fell in love with and married her dresser – Annie Ryan. Hindle dressed in male attire for the Baptist ceremony, giving the name Charles. This was not to be her last marriage; by 1892 Ryan had passed away and Hindle was re-married to a woman called Louise Spanghel.
By the 1920s Music Hall and Vaudeville were in decline due to the advent of cinema as well as the American Depression. Social norms and gender identity continued to be challenged in other ways – step in Gladys Bentley.A hugely talented jazz pianist and singer, Bentley began her career as a nightclub singer in a gay speakeasy in Harlem. 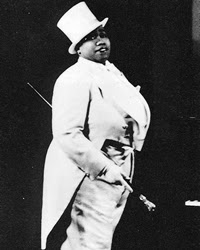 Bentley, a lesbian was big, bold and irreverent. She performed dressed in a white tuxedo and top hat, sang raunchy songs backed up by a chorus line of drag queens and flirted wildly with the women in the audience. She even claimed to have married another woman. The rise of McCarthyism in America meant that Gladys Bentley had to tone down her act. She began to wear dresses, married a man and, even more tragically, attempted to ‘cure’ herself of homosexuality. Bentley was not the only LGBT woman to come out of the Harlem Renaissance. Other popular Jazz singers included Bessie Smith and Ma Rainey, both of whom had relationships with other women.
And we can't forget this legendary king.On 28th June 1969, the New York police carried out a raid on the Stonewall Inn. 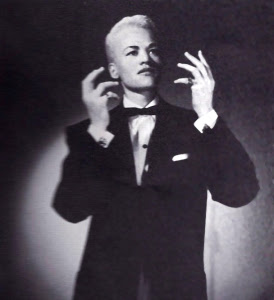 Things began to escalate when a woman – described by witnesses as a ‘typical New York butch’ was escorted into a police wagon from which she repeatedly escaped, running back into the crowd each time.Since that night, the woman has been called ‘the Rosa Parks of the gay community’ and has been identified by witnesses and by herself as Stormé DeLarverie, a butch lesbian drag performer. DeLarverie had already made a name for herself on the entertainment circuit as a drag king, and had been photographed by Diane Arbus. She performed as part of the Jewel Box Revue, America’s first racially integrated drag revue during the ‘50s and ‘60s. Even after Stonewall, Stormé DeLarverie continued to serve New York’s LGBT community. In the ‘80s and ‘90s she worked as a bouncer in various lesbian bars and was also the Chief of Security and later Vice President of the Stonewall Veterans Association.


A modern day king I enjoy immensely is Murray Hill. 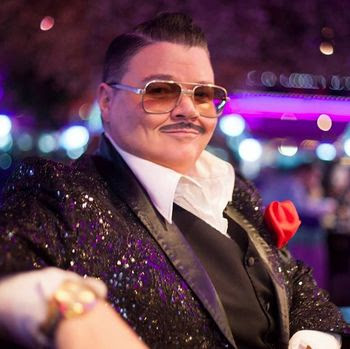 A former fixture of the downtown Village scene, Murray Hill is making a wing-tipped footprint in the mainstream arena, traversing stages, states and seas to find his next act, whether as an emcee to a burlesque show, a standup comedian, a film sidekick or a television personality. Riding on the success of such shows as RuPaul’s Drag Race, Hill’s success has also become emblematic of the burgeoning transgender performance scene, once just simply known as “drag”.He is Mr Showbiz, the hardest working man in the biz and a true delight every time he hits the stage. His self-deprecating humor and entertaining skills are legendary.
Next time you have the chance to see a  drag KING show...go! Their just as entertaining as the queens.
Posted by Mistress Maddie