On this final post of my Newport trip, and on our last full day of being in Newport, we did a small sailing ride instead of the walk on Cliff Walk, where it gave a spectacular view of Rough Pointe. 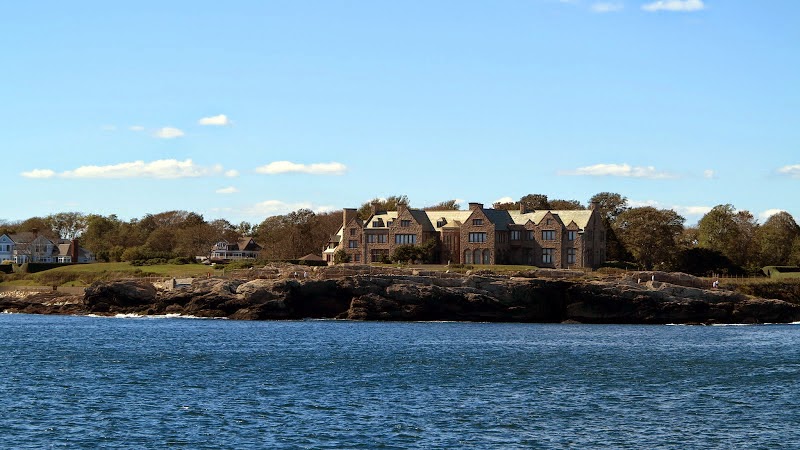 Of all the places we visited, Rough Pointe in my opinion had the most colorful owner. You've got to love Doris Duke and Rough Point, Duke's seaside mansion in Newport, Rhode Island. Known as “the world's richest girl,” Doris Duke inherited her wealthy father's estate when she was only 12, by 16 almost a billionaire, and later ended up suing her own mother for control of the properties. (And you thought your family had spats?) Judging by what happened later, it's a good thing she did. 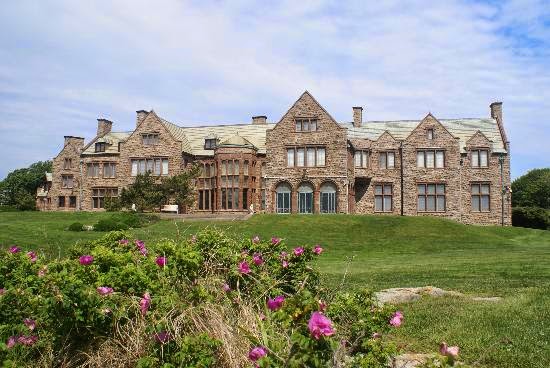 Duke grew up to be a decent piano player, a good athlete, and a beautiful woman. As a jazz lover, she hosted black musicians at Rough Point back when Newport society was not known for having African-Americans lounging in the living room. She had affairs with A-list men like Errol Flynn, General George S. Patton, and Duke Kahanamoku, the Hawaiian surfing king. With lovers like that, a private fortune, and a respectable backhand, why ever settle down? Duke tried, but her marriages fell apart, a child born in 1940 died, and her adoption (at age 75) of a Hare Krishna follower – she believed the woman was the reincarnation of her deceased baby -- came to a bad end. 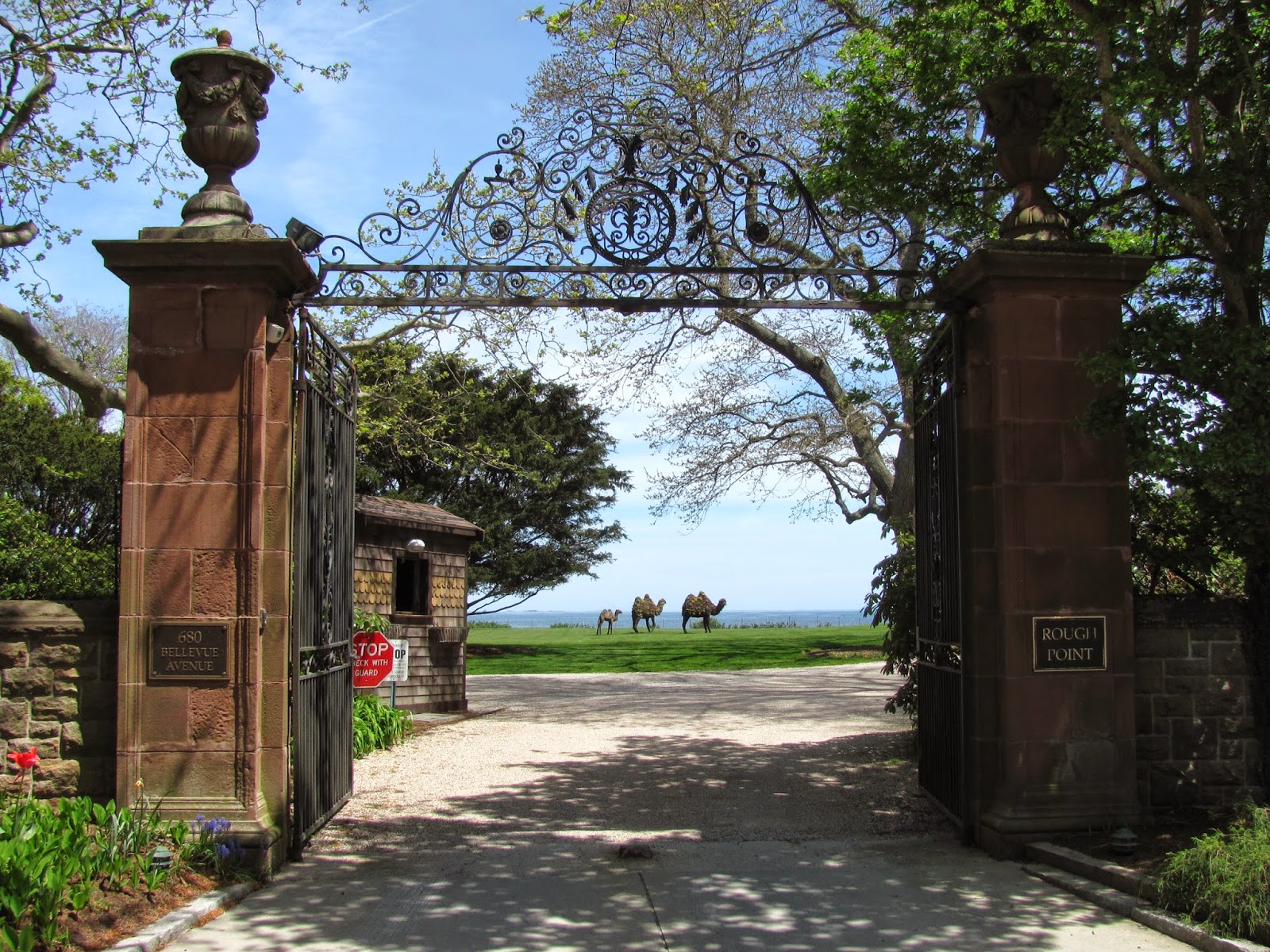 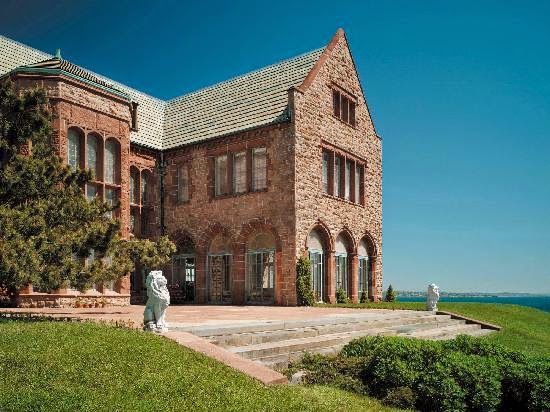 The original owner of Rough Point, built in the 1890s, was a Vanderbilt, so he was able to hire a pretty good landscaper named Frederick Law Olmstead. The building's sprawling, three-story stone facade looks like an English country house that never ends: It has 49 rooms – big ones. The Newport Restoration Foundation offers excellent tours, which it limits to 12 visitors at a time. 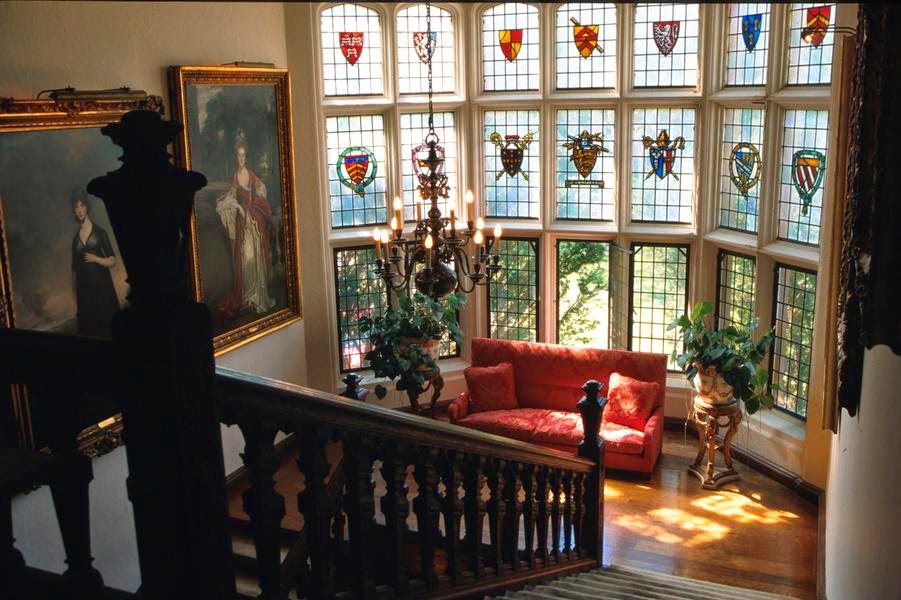 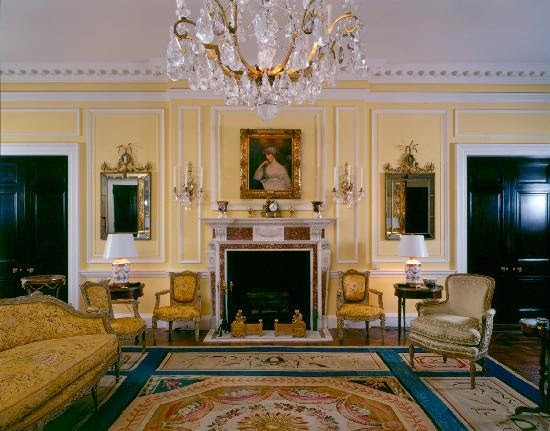 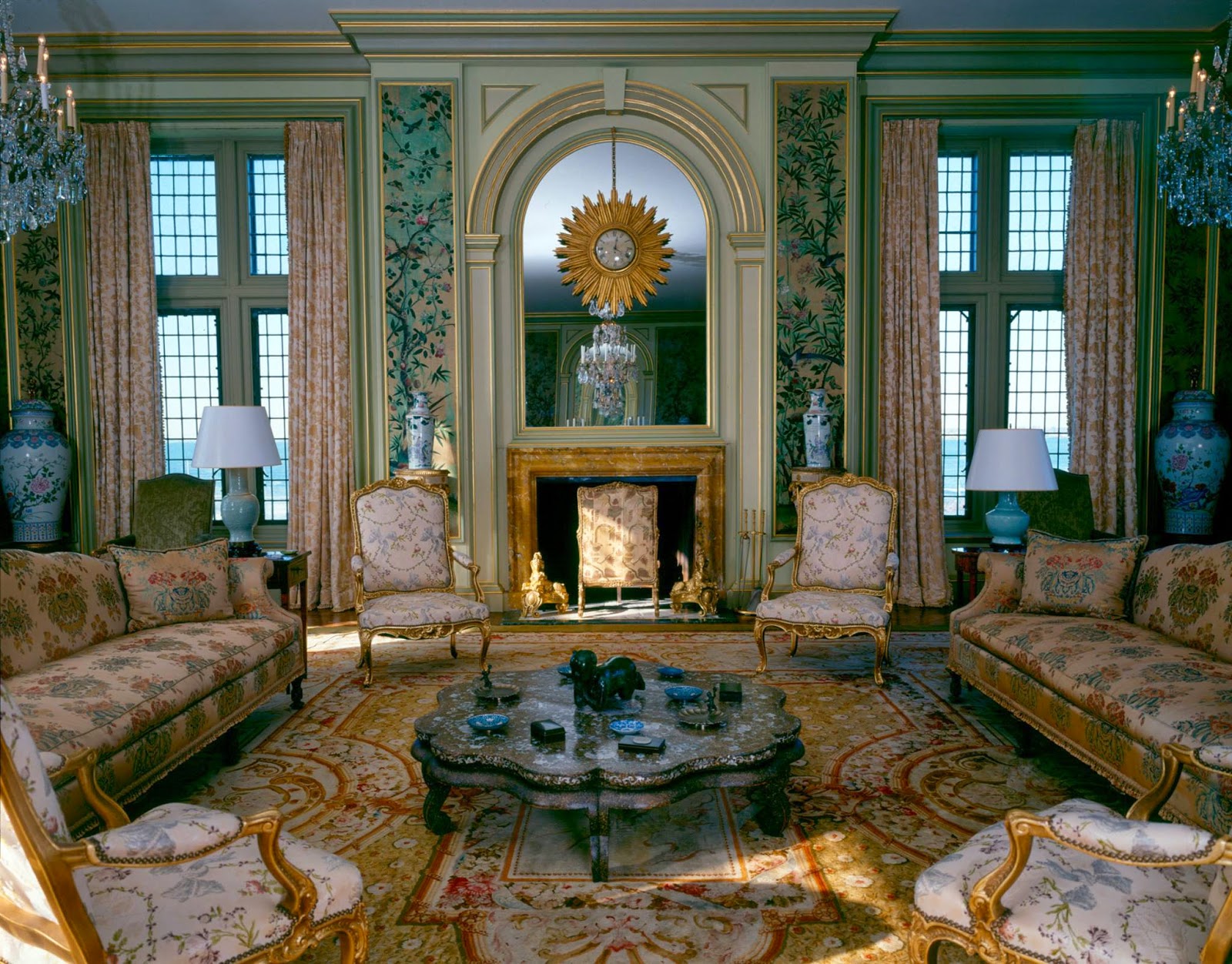 In the 1980s she acquired a couple of camels, to whom she fed Graham crackers on a silver tray. She let them into the mansion's solarium during a storm in 1991; otherwise, they wandered freely on the back lawn and scared the bejesus out of people on the Cliff Walk. These bushes shaped into camels were added for Doris love for her camels. 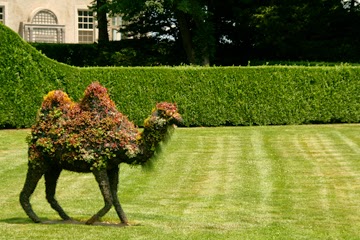 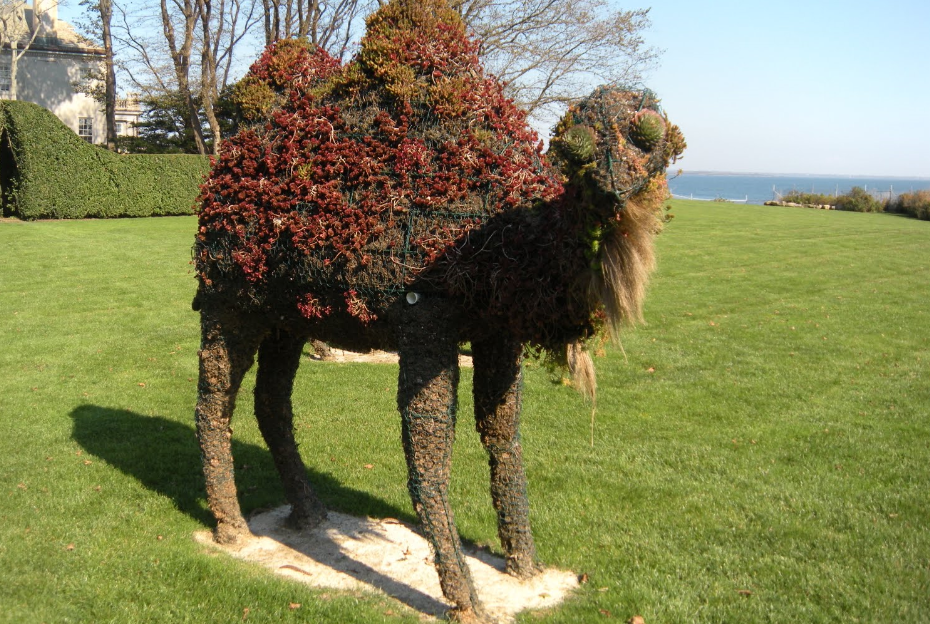 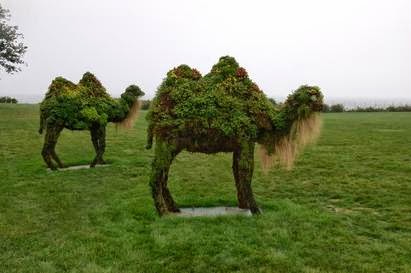 The last beauty we saw on this amazing trip was the home of silver heiress Theresa Fair Oelrichs, named Rosecliff 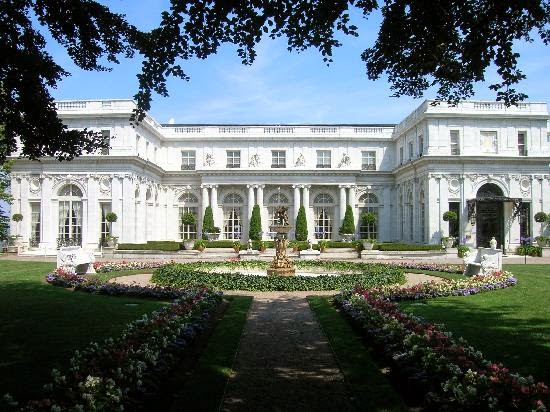 It was built by Theresa Fair Oelrichs, a silver heiress from Nevada, whose father James Graham Fair was one of the four partners in the Comstock Lode. She was the wife of Hermann Oelrichs, American agent for a steamship line. She and her husband, together with her sister, Virginia Fair, bought the land in 1891, and commissioned the architectural firm of McKim, Mead, and White to design a summer home suitable for entertaining on a grand scale. With little opportunity to channel her considerable energy elsewhere, she "threw herself into the social scene with tremendous gusto, becoming, with Mrs. Stuyvesant Fish and Mrs. O.H.P. Belmont, one of the" three great hostesses of Newport." One reason I loved Rosecliff so much, is I enjoy French Baroque Revival architecture. 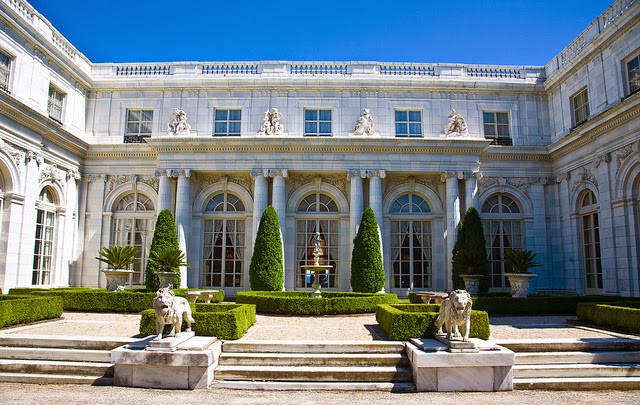 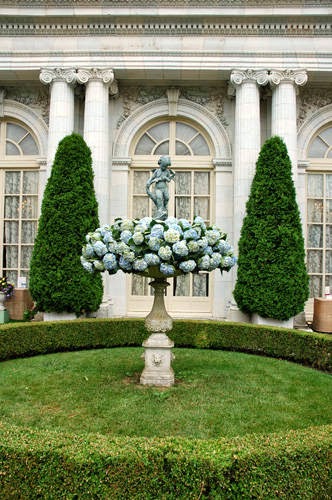 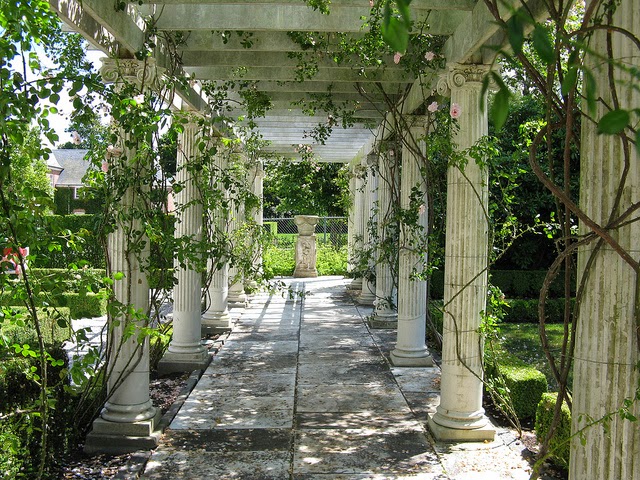 Rosecliff stayed with the Oelrich family till 1941, then went through several owners till the Monroe family owned, it,  till 1971, where Mr. and Mrs. Monroe donated the entire estate with its contents and a $2 million operating endowment to the Preservation Society of Newport County, who opened it to the public for tours. Mr Monroe often would come back to the estate for charity events up until his death in 1991.  Since then the estate and ballroom where used to film scenes for the 1974 version of The Great Gatsby.
I absolutely LOVED the grand staircase!!! Designed for a dramatic entrance wouldn't you say? 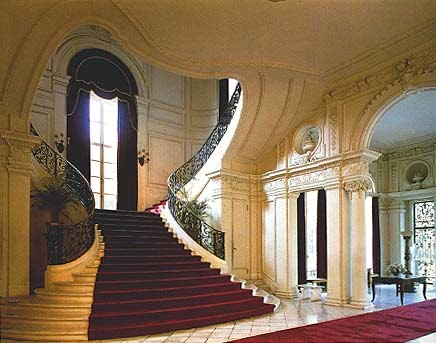 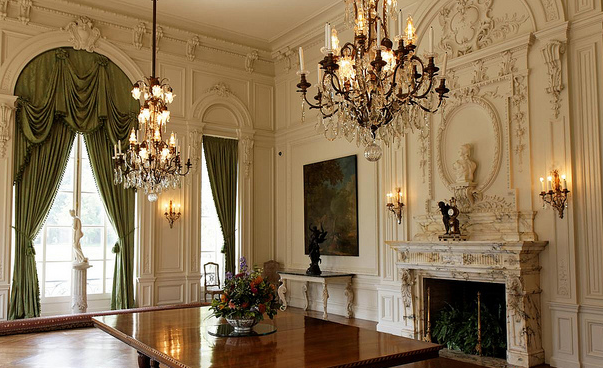 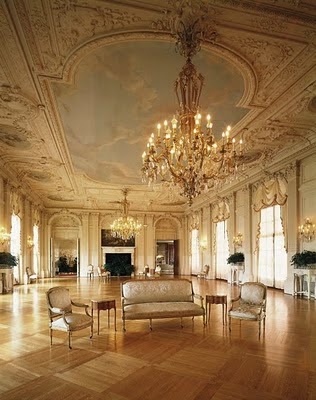 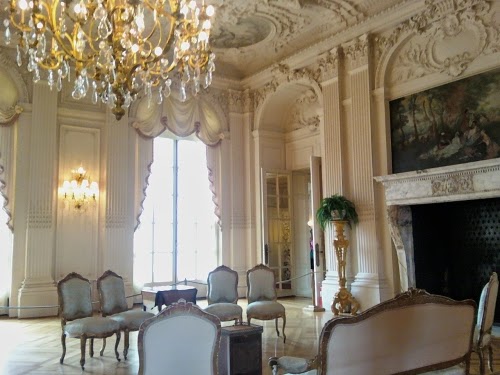 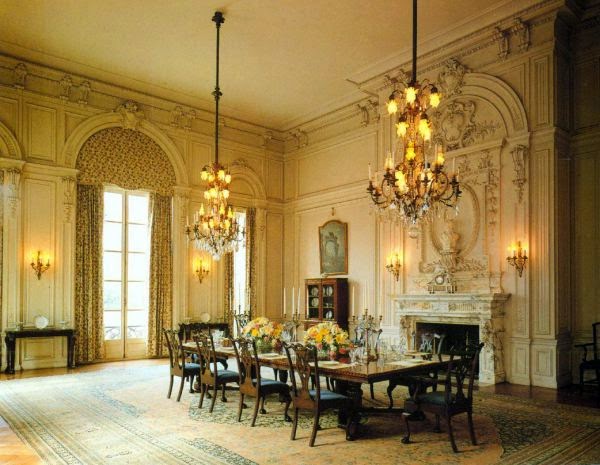 The only house I wanted to see, but didn't was the Astor's home, Beechwood, one of the oldest on Newport, but on the day we went it was closed for some reason. But it will give an excuse for a return trip, don't you think? Hopefully these post will inspire my good friend the Dame to choose a name for her lovely home. I told her no proper hostess in society has a home unnamed!!!!
Posted by Mistress Maddie