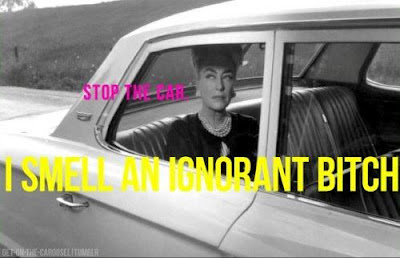 Stop the car, I smell an ignorant bitch! Just a while ago I was perusing my blog list and came across this post over at Bob's.  Check his snark side on things, quite funny.  The title of Ignorant Bitch is yet again....... Ambercrombie & Fitch, I know, no need to clutch our pearls, since they are always being ignorant bitches, or making young boys pose nude and "worked up" or being prejudice to some minority, or telling  The Situation he can't shop there. Now this from  Mike Jeffries, the CEO of Abercrombie & Fitch..

“We go after the cool kids. We go after the attractive all-American kid with a great attitude and a lot of friends. A lot of people don’t belong [in our clothes], and they can’t belong. Are we exclusionary? Absolutely.”—Mike Jeffries

Now, apparently what he is saying is unless your thin, beautiful, a hot jock, or someone who looks like they have to eat a sandwich, you don't belong in their stores.  When is this company just going to go belly up? I have never seen a company exclude shoppers like this. Probably not a wise move in this economic climate. And you most likely remember their  catalogs right? I am shocked Mr Jeffries hasn't cut the girls out yet! And a snippet from Bob's post-

Now, A&F has had many requests by non-profit organizations to have the ‘blemished’ clothing donated to areas of need but the company refuses: "Abercrombie and Fitch doesn't want to create the image that just anybody, poor people, can wear their clothing. Only people of a certain stature are able to purchase and wear the company name."

Ignorant bitches I say! And speaking of Mr Jeffries have you seen him........ 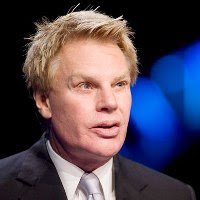 Looks like Janice Dickinson in male drag to me. And he has the balls, at least I think there still there, to say only hot, attractive people can shop their dump!?! They can all go choke on there own moose dung. And this your Ignorant Bitch for this segement.
Posted by Mistress Maddie

Email ThisBlogThis!Share to TwitterShare to FacebookShare to Pinterest
Labels: Items of intrest, Stop the Car- I Smell a Ignorant Bitch