A City by the Bay-Part 2 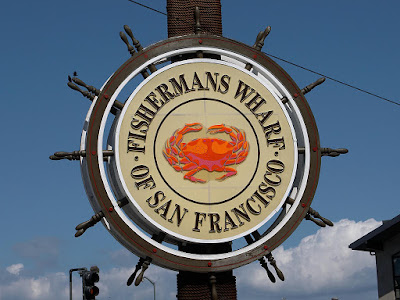 Now for some more sights we saw the next few days... The one thing the Mistress just had to see while out in San Francisco was Fisherman's Wharf. Now mind you, it is a major tourist trap and the Mistress can't stand to be in such tight quarters with people packed on top of you and strollers hitting your feet. The only time the Mistress likes tight quarters is with a bunch of Brazilians down in the.....whoops, never you mind! No,I just had to go see the sea lions that come up out of the bay to sun themselves on the piers! 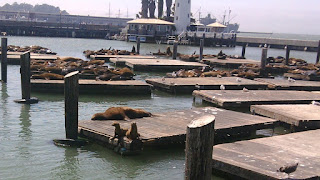 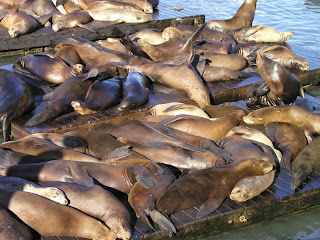 We stood there for quite a while just watching these creatures and the noises they make. There must have been a least 200 of them just playing and lying around. It was worth the pushing and shoving to see them. As I said, Fisherman's Wharf is really a tourist destination where there are many restaurants, shops, rides, and other entertainment activities. We stayed long enough to eat a delish hotdog and then go on a tour of the aquarium which was very interesting and amazing to see as it goes beneath the bay! At one point, we were surrounded by nothing but glass on all sides. Really cool! This was a view of the famous prison (Alcatraz) across the bay. 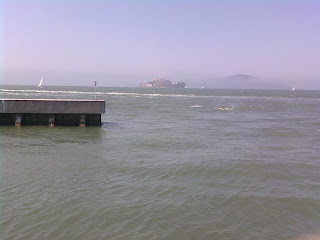 What else can I say about the food that was all around us? 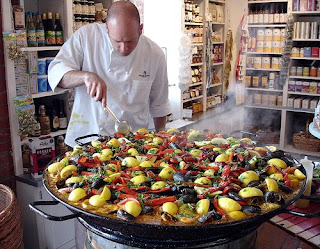 After the wharf we then headed up toward the Marina district along the bay where Boy-Toy snapped this picture of moi in on one of the piers in the bay. In the background is the famous Ghiradelli chocolate factory! Yum. 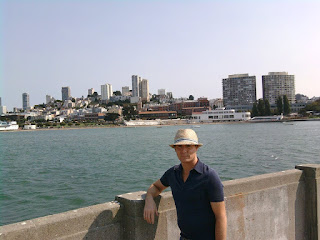 Then it was on to one of the Mistress's favorite spots in the city, The Palace of the Arts! 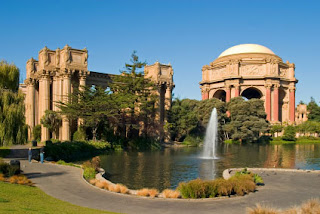 The Palace of the Arts was originally part of a much bigger exhibit when the World's Fair was in San Francisco many years ago, and is located in the Marina district. This is now all the city has left. It is a picturesque park with very large scale and very ornate Greek temples and a series of beautiful colonnades. There is really nothing to do there in particular. Most people just stroll about, taking pictures, drawing the architecture and feeding the many varieties of water fowl that have habitats there. But since I have a love of architecture, I just had to see this. Why, the Mistress felt like Athena herself strolling Mt Olympus! 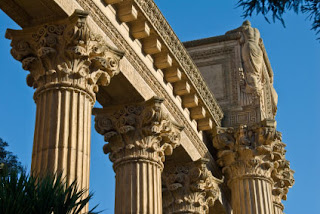 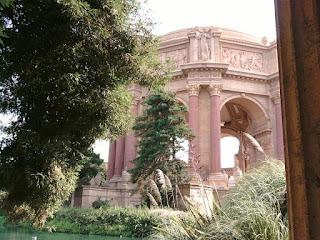 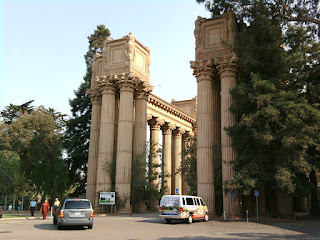 The day we saw The Palace of the Arts we had met up with the beautiful Kailyn for a very tasty and flavorful dinner at Puccini and Pinetti. 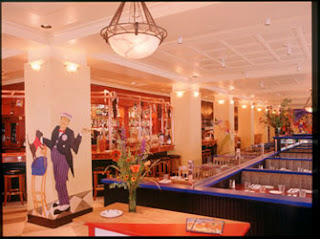 What a wonderful time we had dinning with our wonderful hostess with the mostess, Kailyn. To read her take you can click here. We started the evening by taking advantage of the happy hour special. We chose the $2by the glass red wine special. I believe we did eat, but after four glasses, who knows! All I remember is we had a wonderful time and the dinner was to die for.I'm glad we got to know Kailyn because she too loves to eat. We bid farewell to her that night as she had to work the next day, while the Mistress and the Boy-Toy headed to the Castro to get their drink on! Tomorrow-our trip to the Napa and Sonoma wine valleys with our hostess Kailyn, where as David put, it was like Patsy and Endina in the French wine country!
Posted by Mistress Maddie