The Musician and Comedian of the Family

You may remember me talking of my Aunt's kids before. She and my Uncle have six kids,all so very different from each other and what they do for livings. But rest assured all very colorful and full of life! My Aunt recently told me that my cousin Robert had been featured in a news article, a Q and A, out of Chattanooga where he plays with the wonderful Chattanooga Symphony. He is quite the musical artist and very accomplished and his music from the voila is quite magical. So proud he is my family! He also has quite the sense of humor....... From the Times Free Press...... 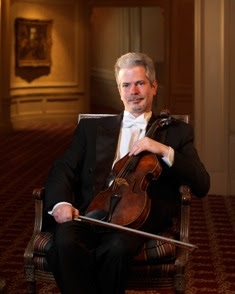 Robert Elder began playing the violin in the third grade because he realized it would get him out of regular classes. In middle school, he was asked to play with the high school band and was introduced to the viola, a slightly larger instrument, and he was instantly hooked.
“I came to it arbitrarily,” he said. “They put a viola in my hands, and I thought, ‘This is incredible.’ Immediately I was captivated. To me, it had a warmer sound, and it just resonated with me. I never looked back,” he said.
From that point on, he said, he knew he would play professionally.
He joined the Chattanooga Symphony & Opera in 2000 after seeing an ad for auditions looking for symphony and string quartet players.
“That is what appealed to me,” he said. “I wanted to do both.”

Q: When did you know you would play music for a living?
A: I sort of knew from the beginning that this would be the way to go. It’s ridiculous to think of a third-grader making career choices, but I sort of knew it was what I would do.

Q: Were you pushed? Did your parents play?
A: No. The way I came to it was, I was in class and a man came in and held up pictures of stringed instruments and said, ‘If you would like to learn to play one of these, come with me.’ I thought, I can stay in class, or I can go with this guy and do something different. I opted to go with him. It was a complete accident.

Q: Have you played other types of music besides symphonic?
A: No, not especially. I guess the most I branched out was in Philadelphia. There was a Russian poet with whom I collaborated. He would recite poetry and I would improvise what I thought were the sentiments that I thought he was talking about. We gave several performances of that. That was a lot of fun.

Q: Do you play any other instruments?
A: I tinker on the piano and lately I have taken up the harmonica, especially when inebriated.

Q: What type of songs do you play on the harmonica.
A: Well, I have a habit of calling up friends and improvising.

Q: Tell me about your photo (below), which was taken for the symphony’s use.
A: I love to cook, and I called [the photographer] to ask if we might be able to incorporate cooking with the viola. He was willing to try. I gathered up my cutting board and actually went shopping for stuff I thought would look good with a viola. I think if I weren’t a musician, I would at least attempt to be a chef. 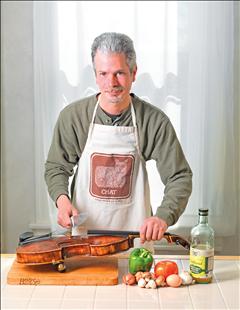 Q: At the risk of over thinking things, do you find similarities between playing classical music and cooking?
A: Cooking does allow for a certain amount of improvisation. What they both have in common is that there is no substitute for practicing.

Q: The CSO traditionally has offered an opera, pops and classical series. Do you enjoy having all three options?
A: I am definitely a fan of expanding into any styles that the orchestra can offer any kind of audience. What I love about playing in the quintet is we get to go into places where people might not get to hear a symphony. For example, we get to go into schools all over the area. To actually hear them cheer and even scream in enthusiasm is absolutely an energizing experience.

And be sure to check out their web site .....The Chattanooga Symphony.
Posted by Mistress Maddie