There was a show. A very strange, enchanted show.  During my long hibernation, I took it easy and decompressed for the most part. With excemption to another famous, fabulous three hour lunch with our lovely Anne Marie and her hubby Arteejee,  Daddy Warbucks for Christmas got me tickets for us to go see the Moulin Rouge, which was a nice treat. 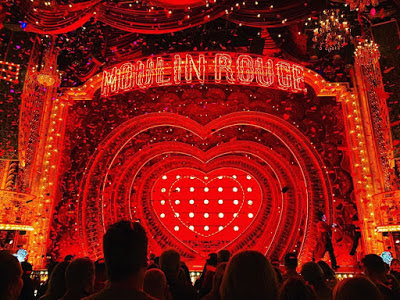 The musical version of the iconic Baz Luhrmann film has hit the Great White Way. There are few musical films as iconic as Moulin Rouge!, which took the world by storm when it opened at the start of the century starring Ewan McGregor and Nicole Kidman. After initial tryouts the musical version of the film has officially opened on Broadway in 2019, with a West End run announced for 2021.  And the reviews seem to be pretty favorable. Entering the red light-coated Al Hirschfeld Theatre, with the stage flanked on either side with a giant red windmill and a large elephant’s head, you’re immediately asked to immerse yourself in the dreamlike, fantastical world of Baz Luhrmann’s 2001 romantic tragedy Moulin Rouge. The whole theatre was pretty much the set, and the next best thing to actually being at the real thing.  As its musical adaptation blazes forth with a whiplash-inducing 70 songs, flashy can-can dancers and bohemian ideals, the fantasy is forced to be grounded in reality, but doesn't lose any of the film’s  spectacular-ness in the process. 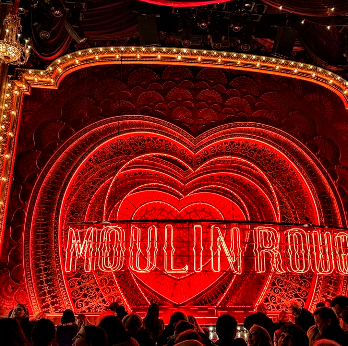 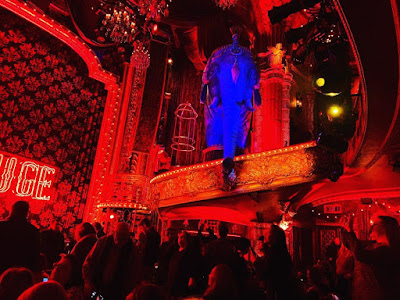 Before the curtains open, the show begins very suddenly with two women swallowing swords. Like Cabaret, Moulin Rouge! thankfully refuses to let you forget that its setting is maybe its most important character. Even the Playbill offers a history of the storied Paris cabaret club’s 130 year history. The framing of the musical is the first thing that sets it apart from its film counterpart: where Luhrmann framed the story with foreboding sadness led by the mystical song “Nature Boy,” the stage show looks to the bacchanalian chaos of cabaret. 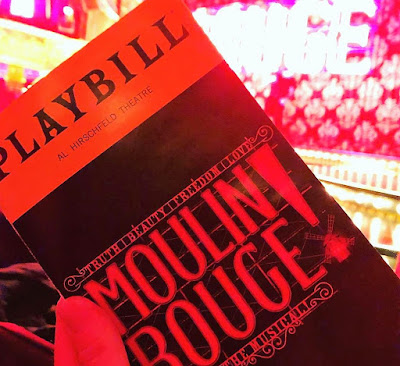 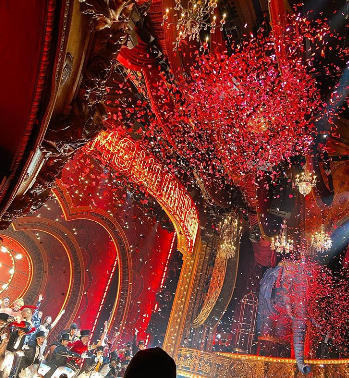 The adaptation, with a tidy, problem-solving book by John Logan, female-and-trans-empowering choreography by Sonya Tayeh, and farce-with-a-heart maximalist staging by Alex Timbers which looked incredible, Moulin Rouge! sparkles like a million falling sequins, tickles like a chorus boy’s feathers, and burns like a shot of absinthe engulfing your brain.Logan’s tweaks to the original screenplay are neat and necessary. Now the male ingénue, a virginal writer lured to the City of Light by the promise of Art and Love, is an American: Christian, played by my newest crush du jour.....Aaron Tveit, made me MELT. 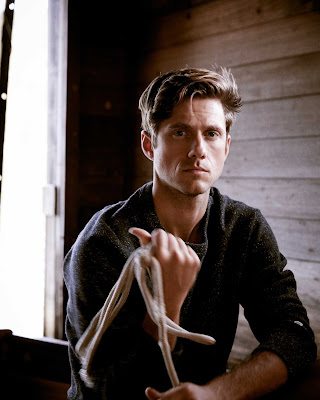 Our hero quickly falls in with bohemian painters and composers such as Toulouse-Lautrec, who Sahr Ngaujah played very salty and fun,  and Santiago, played by Ricky Rojas, spoofing the film’s Latin clichés. These outlandish artistes bundle Christian off to the hottest nightclub in town, the Moulin Rouge, where the lad promptly falls in love with the house diva, Satine, and the rest follows suit. I found the play to be honest much more enjoyable then the film as it didn't have all the jerky and quick moving camera movements. And say want you want, but I found the play very satisfying and the music  numbers are the highlight. Not to mention my new found love for that hunky singer Aaron. His voice made me melt.
Posted by Mistress Maddie