STOP THE CAR! I SMELL AN IGNORANT BITCH 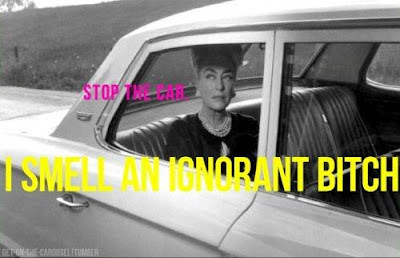 When the Mistress is away from traveling,  I miss some stories on the news. But with that looney bastard in the White House, one needs to tune it out. But it just keeps getting more crazy and reality show like I have to pinch myself. At this point it reminds me of the Jerry Springer Show. I warn you now...I had a few laps in the gin pool when I composed this and am firing off on all cylinders. I'm about to be very un-ladylike.

White-Supremacist-KKK-Neo-Nazi, and antifacist rally . Quite appalling what happened. I don't know what in the hell is wrong with these people, and this country is getting as bad as a damn war zone. I guess this is what happens to trash that didn't fit into society. And the damn antifa group. Just saw video of an antifa moron hitting the Dodge Challenger with a baseball bat, WHICH CAUSED the driver to then hit the gas and run over people. Antifa aren't here to fight fascists. THEY ARE the fucking fascists. This country is seriously going to hell since that loser from the reality show became President. I hate to be mean, but will be just drop dead now and do everyone a favor? He's old and looks like a fucking fright to begin with. He's an asshole who likes all the in fighting and violence and allows it to continue....he has to be bit nuts. In connection with the riots, it took the bastard  three days to do what should have come fast and easy. And now he has found himself with ever fewer allies after his botched handling of the Charlottesville violence. Soon he'll be lucky if anyone gives him toilet paper to wipe his ass. Maybe Pence would. I'm sure he sucks off Trump everynight after he finds it first.

Now I'm reading headlines about Steve Bannon possibly being the next one gone. A better question would be who the fuck cares? I say fire the fat slobby bastard  and while he leaves, take that fucking HARPIE Kellyanne with him! Trump seems to not keep anyone long, so I'm sure that twat's day is coming.

Then I read that the trump bitch Ivanka would be leading the U.S. at an upcoming summit taking place in southern India. Greeeeat. Make us more a laughing stock to the world. She needs to sit her ass down, go back to New York and await her hubby's arrest, with other members of her family one day, and design,cough,more cheap crappy shoes made in China.

In all my life, I have never seen such a shit show come out of DC and the White House and still nothing has been accomplished. Except for fighting, bickering, firings, chaos. He must thinks this is his old terrible reality show. But his fan base still have there head up their ass to even see it, which proves these idiots deserve him. The only one I don't mind is Melania. Beautiful.... but probably doesn't have the best of eye sight. Has she seen that bastard she married??? I hear rumblings already she will probably leave him once out of office. I say Melania, why wait.....take the pre-nup and ran like hell from the damn fat fuck your married to. I'm sure she can find another millionaire to marry with a 2" cock. I hear Tom Cruise is still looking tootes.