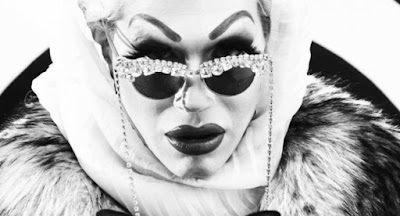 I have always love Sharon Needles...such a creative queen. Here is the fabulous gothic dark one now with her newest... where Sharon gets inspired by  real-life Hollywood horrors, like the deaths of Elizabeth “The Black Dahlia” Short, iconic actress Jayne Mansfield, and Manson Family murder victim Sharon Tate in her latest video Hollywoodn’t, directed by Santiago Felipe. “I wanted to take that darkness and convey old Hollywood stories that turned up in tragedy,” said Needles, adding the focus was on “disturbing and sad stories of women who met their demise in Hollywood” and “dark satire and cruel humor at the expense of real women whose lives were unfortunately cut short. I have an obsession with Hollywood, and I have an obsession with death.”  The video also features NYC'S fabulous dark queen, Severely Mamed as the news reporter.