I have long said if you have questions email me. Well Tim, who has been into drag race lately sent a email, put in short terms, how did I started drag, why I did drag, what was my  style like and why did I stop.  Well, that could be a huge answer dear. I'll try to keep this in short terms. For moi, drag started with a group of us doing drag for Halloween for a gag. The only thing was myself and good friend Vera, really enjoyed it. So we would occasionally do drag for parties. This continued for some time. After I came out and dated two guys, the first two no less, I got burnt by both. Fed up, I turned to drag as a means to escape and keep men at bay. Can you believe those words just came out of my mouth? Tis true. So I started doing drag more, at parties and going out to clubs, then hosting and becoming a scene queen I call them. While I did shows, it wasn't to the extent like queens who do it weekly. I was more the one who was seen everywhere ,and became known for the drag. Originally the name was Madeline Wesley. But my look was not innocent enough for that name. I once saw a married man, and a friend referred to me as Mistress. DING DING  DING! Mistress Maddie. But as the drag got more perfected, another friend was like your style is a bit more camp elegant, you need a more chic name. Well at the time I used Borghese make up. The Mistress Borghese stuck....just Maddie to close friends. But it got to the point where in or out of drag, everybody called me Maddie. Call me Steven, and I wouldn't even hear you. I guess I continued drag because 1- it was fun 2- kept men at bay and 3- I love seeing the transformations every time and still do. And I do love glamour. While I was never in pageants and shows weekly, I was more like I said ,a scene queen...think Amanda Lepore, most notably. The show would have to have a charity attached for me to be in it. But the Mistress would shake the floor up on the weekends, sometimes clearing the whole floor to put on a performances ….and stand back when the high kicks started. I LOVE dancing. I would wave, vogue, ball, I loved it all and still do.

The first time ever in drag! YIKES! 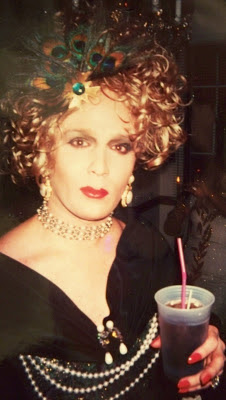 The dancing became my trademark as well as big hair and often with accoutrements in it. I did netting, jewels, doves, birds feathers, plumes, seashells, butterflies, branches, fans, and flowers. Even did Carmen Miranda once. The forms of drag for me were either campy but chic, or chic and fishy. With different technique in make up would change the whole look.

Two months ago. Chi and fishy. 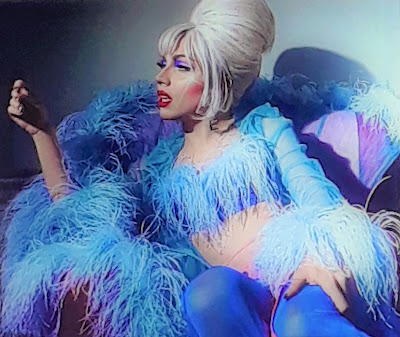 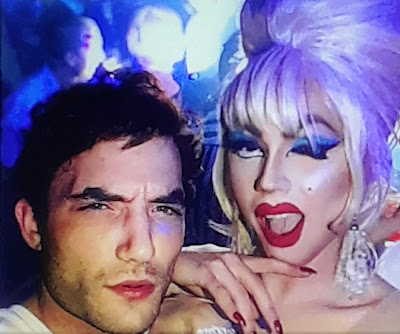 One night while out of drag, years later, I met a guy.... and we would end up bring together for five years. A couple of months in one night, while talking, he told me of a fabulous drag queen he met one night and was funny, catty , but beautiful. The more he talked and describe the queen, I said dear, that was me. He was shocked. We laughed, but he had at this point never seen he get ready, or in drag, since we met. A huge party was coming and everyone wanted the Mistress present. Well he almost fell over when he saw the transformation.He couldn't understand how a  cute guy could also be a beautiful woman he said. I said, DRAG QUEEN. Well, once the Mistress was out, she wanted out more. In the long run, he could not accept the drag thing, and I came close to never doing drag again. He was very uncomfortable when people found out who I was. But even his own mother wanted to go out one night with me in drag  he blew. Well, I wasn't about to give in, being the wild child I am.  I called it quits, after not doing drag for a couple months.  Most of my friends were like it's a part of you, don't give in. 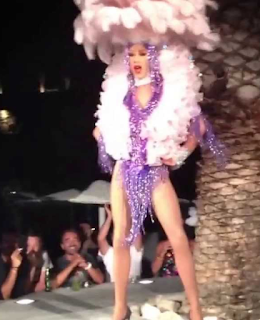 After he was out of the picture the Mistress Borghese was back with a vengeance. But most guys didn't care about dating a drag queen. If they know the queen was cute out of drag they didn't care. When I finally went on to date the ex boy toy, we were together for 11 years and he loved the Mistress. Most guys have more issues with cross dressers then drag queens and that where my first ex was mixed up. He viewed drag as cross dressing and it isn't.

After moving with the Boy Toy, who I share custody of Buster with, to Philadelphia, drag continued for some time, But when I entered my current job I found less and less time to do drag, not to mention from working out, my body was getting more built...and while I still enjoyed drag, my interests changed slightly. Over a little more time, after around 22 years of drag I decide to hang it up. I have since sold about 3/4 of the drag and wigs, but kept a small storage unit of select things for the few show where I make appearances. 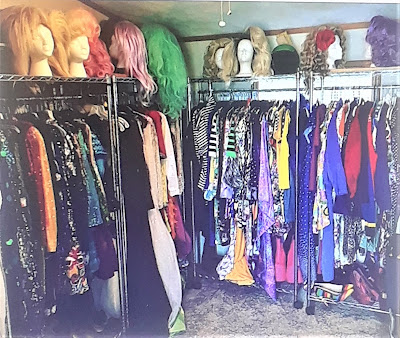 Closet at one time 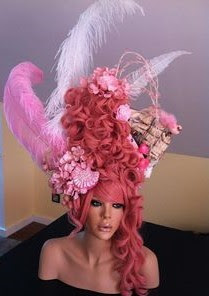 A wigs and head piece ….soon to be in the fabulous Pearl Gates's clutches!!!

But a queen never truly never not does drag again. I still do the occasional show or party, and we just did  a photo shoot of Philly queens, above, I posted some time back.

Two weeks ago at Gay Bingo in Philly. This was my more campy chic drag. 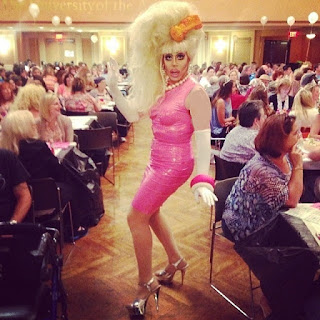 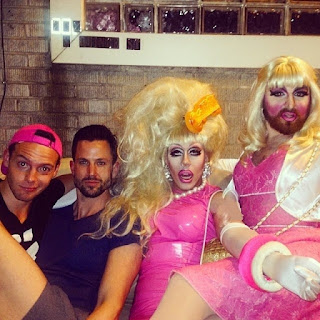 And did I mention I love high heels. I would swear to date, it's why my legs are built. 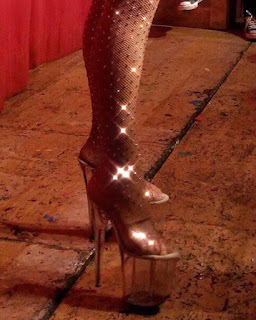 I will always love my drag and drag persona....and I will always have drag. It takes a personality, big balls, a TON of time getting ready, and not to mention the money it takes for wigs, costumes and such. If you see a queen out performing at a show tip her a few $1's These queens are exhausted even thought they may look stunning. So while I may not do drag anymore.. semi- retired, lol, it's why I enjoy my weekly Grande Dame post to still showcase drag, but in a different way. Thanks Tim for your query.