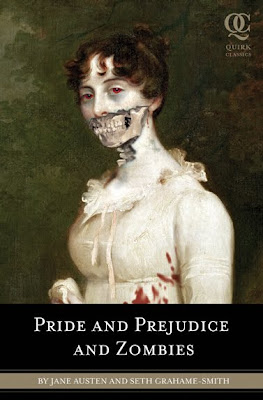 It looks like vampires are so last year- these days it's all about the monsters. Lady Gaga set a trend with the late Alexander McQueen's ghoulish costumes,prosthetic make-up and pod like reptilian platforms.Then their was the French fashion house Lanvin's disturbing new ad campaign featuring full body make-up that looks like the model's body has been skinned alive, and the there was the movie Where the Wild Things Are and the forth coming remakes of the The Wolf Man and a remake of A Nightmare On Elm Street. But have you heard of the forth coming Pride and Prejudice and Zombies? I can not wait to see this! The mash-up book by Seth Grahame-Smith revisits Jane Austen's classic novel "Pride and Prejudice," adding flesh-eating zombies and taking other significant liberties with the plot. The book was published in April 2009 by Quirk Books, a company known for taking public domain novels and blending them with fanboy favorites and pop-culture elements. Grahame-Smith's version does maintain familiar elements of the Austen classic — the timeless tale of a heroine searching for love and independence — but adds the plot twist of a deadly virus outbreak that turns victims into undead vicious killers. Natalie Portman, will play the leading character, feisty Elizabeth Bennet. The film will be directed by Richard Kelly and produced by Dark Films and Handsome Charlie films, Natalie Portman's own company. Here's the trailer. Just this short clip alone got me unnerved and gave me chill bumps! A visually stunning film, but looks very creepy.

Posted by Mistress Maddie at 9:30 AM