Over the past weekend I watched the Philadelphia Story which I had never seen before and loved it! Part of the reason I wanted to see the movie was because the characters from the movie were based on a real Philadelphia family and their rambling estate. The estate in question is the Androssan Estate, which has been in the news here recently because the Montgomery Scott family is trying to now sell the mansion and land after all these years. 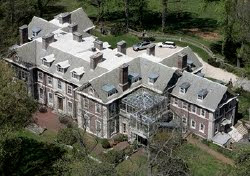 The local Historic Society is trying to figure ways to save it from the evil developers. Curses! The Androssan Estate is an iconic and bucolic mansion of the old Main Line and contains perhaps the areas best-regarded mansion. Col. Robert Montgomery, who created the investment firm that is today known as Janney Montgomery Scott was married to Hope Binney Tyler Montgomery Scott. They had the Androssan built and named after a town in Scotland where the family is from, and the house was designed and built by renowned architect Horce Trumbauer. The up-keep of the mansion is a full time staff of 14. Inside are 50 fabulous rooms, 14 foot ceilings, a grand ballroom and staircase and a dinning room with accommodations for 30 people. The house is decorated to the hilt with hand curved moldings and trim. Androssan will be forever associated with Philadelphian Helen Hope Montgomery Scott more than anyone else. She was the epitome of the Main Line high society in Philadelphia and the country. She entertained royalty, big name socialites, movie stars and sceneters from all over New York City. Helen Hope Montgomery Scott is who Katherine Hepburn's character was based upon in The Philadelphia Story. And from what I read she kept the house a well oiled ship. Since her passing, various family members have lived their, but the well-known fabulous parties are long gone and the family is now looking to sell off the Androssan because of financial reasons. Androssan is believed to be going for around $90 million with 360 acres and mansion included. What do you think? Should the Mistress throw in the turban and buy the little place? Would y'all come visit if she did for long weekends? Just think. Fabulous parties. Happy days are here once more!
Posted by Mistress Maddie at 9:09 PM