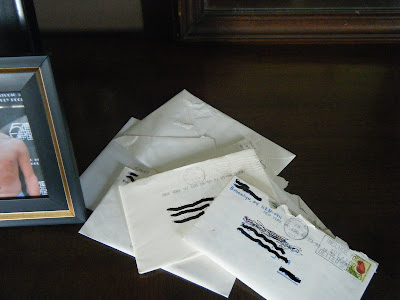 You recall last weekend I was glamping with my good friend and sister Mame, aka David Dust, where we had a blast. While doing the post, I was thinking I hadn't shared any letters from Mame lately, so I thought what the hay. Mame is one of my oldest, and I do mean that with love, and drunkest, dearest friends a person could ask for. There isn't a happy hour in the city safe from a visit from Mame! 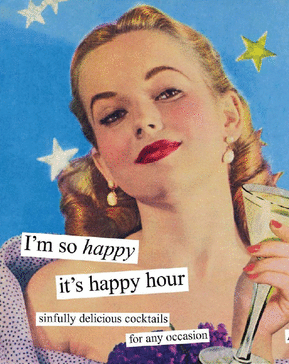 Why anyone that can down two half gallons of Bacardi Limon, and still keep her pearls on, has got to have talent. But I digress. Anyho, when she first moved the the big city, I would look forward to her letters filled with hilarity, and never being there before, I lived vicariously thought her, and her antics in the city. And mind ya, these were hand written letters, you know, on paper, and then were walked to a big blue box called a mailbox for you young ins! I still love hand written notes. But here's another letter from sister Mame....... 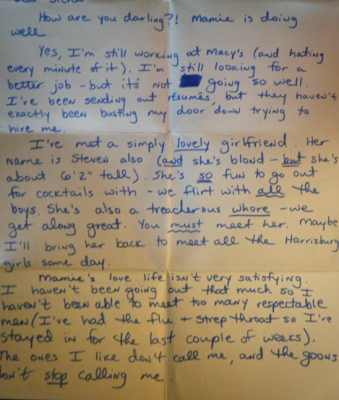 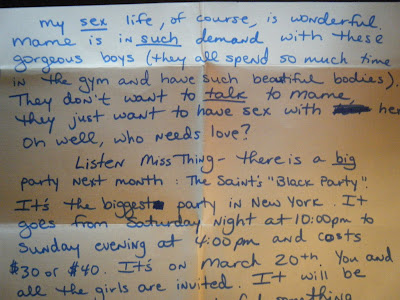 Well, I did meet Steven eventually, and Mame was right on all counts, as she broke the bed in at our friend Wayne's Ranch! And what a good time she was. Now you can all thank Mame for creating and molding who the Mistress has become! She has always been such an inspiration, and was the first to tell me condoms were a form of sexual protection, not water balloons to throw at people. And since then we are both popular with the boys all over! You can read Mame's story, Voices From the Past on how we met. It wasn't all friendly at first. But to this day, I'm glad to have a good friend and sister like Mame. I love her like a rash!
Posted by Mistress Maddie at 2:37 PM